Racing for the Sun, Amy Lane 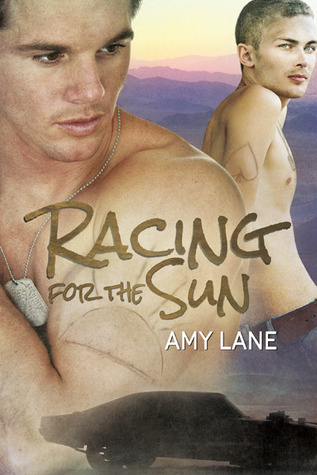 My name is Jasper Anderson Atchison. People call me Ace.
I am a murderer and a thief, but if Sonny still wants me, I will call myself a good man.

This book opens with impact and never lets go. Not once. The characters were beautifully nuanced and intricately drawn by a very skilled writer. Ms Lane is very good at taking characters who are incredibly flawed. Who do things that you really should not like but, interestingly, you like them because of it, as well as in in spite of it. This review could have taken several directions, there is so much to concentrate on. This is just my interpretation.

My folks were all right people – not warm, but not rough. Fed us, clothed us…But I was the youngest of six, and that makes things crowded, and it makes you damn near invisible. By the time I graduated, invisible was the only thing I was good at. I decided I might as well be invisible someplace else.

Ace Atchison has come from a blue collar family, was never going to be able to afford college so he enlists and works his way through to Staff Sergeant on his second re-up in the army. He’s in charge of new recruitments when Private Sonny Daye turns up looking like a kicked dog. The name is bad enough, Sonny Daye? Really? And Staff Sergeant Atchison calls him on it. Private Daye doesn’t seem legit to Ace. He can tell from his body language alone that his enlistment papers are BS. The only thing he knows for certain is that Sonny is eighteen. And that Sony is desperate to stay…in a war zone –

“I’ll do anything,” he said, and no man in the world could misinterpret what he meant by that.

There was a temptation there, a growing knowledge I wasn’t ready to face.

Twenty one year old Ace Atchison takes Sonny under his wing and looks out for him in general, more so when he is assigned to a sadistic Master Sergeant, Carver. Sonny needs, craves guidance and Ace, as a Staff Sergeant, does that automatically. Ace and Sonny also bond over Sonny’s ability to fix a car and make it fly. Sonny soups up a Hummer that Ace takes for a joy ride in the desert which further fuels Sonny’s dream of saving enough money to have a garage, a street racer, and a driver. He’s going to stay in the army long enough to –

…..”Start my own garage,” he said, his voice dreamy, and I knew this was something he thought about. I smiled a little, thought to give him his pipe dream. “Yeah sure, Sonny,. We’ll do that. Take the pay we save, buy ourselves a car, a little garage. Make us some money. Get a bigger garage and live someplace nice. Why not?” “That’s a promise,” he said, his voice guttural. “You can’t go back.”

I blinked. I hadn’t realized I’d married the guy just by feeding his dream. But then….”Why not?” I shrugged. “Got nothin’ better to do when I get back.”

And ‘get back’ Ace does after some mayhem and death bonds them a bit more during the two years they are in a unit together. Before Ace leaves he asks a colleague and friend, Burton, to look out for Sonny for the month he’s on his own, because he knows he needs all the looking out for he can get. When Ace is back stateside he secures two jobs, working security and flipping burgers, to make Sonny’s dream a reality in a small desert town outside San Diego. Buying a garage with a cottage out back, and creatively buying a Ford Taurus SHO for Sonny to trick out. Ace works hard thinking more and more about Sonny, about how he wouldn’t shake his hand when he was leaving Pakistan, those words –“I’ll do anything,”  hoping they were meant for him and not just for anybody who would help him stay in the army.

Sonny comes to San Diego to meet up with Ace. Sonny is not an easy person to live with. He complains, he is childish, he is needy, he has less than ordinary people skills, and doesn’t much like others. He constantly pushes Ace on to women. Telling him to ‘lay the prettiest girl’ when he wins races. This pisses Ace off no end. He doesn’t like women in that way, but Ace is not out and he doesn’t know that Sonny wants him. Neither discusses their sexual orientation with the other. But Sonny flips Ace’s switch. Ace, who has never been with another man, although he likes men, he knows that, finds himself wanting Sonny with an intensity that he only saw once before…that ended in tragedy. It takes a while for the pair to get together and when they do initially it is angry and rough after Sonny, yet again, pushes Ace towards a female, a female he didn’t want. Then Sonny gets possessive –

but not if you fuck me. You fuck me and…”

I kissed him, a hard angry kiss, all teeth and tongue and clash….

I grabbed at his shoulders ’cause he said to fuck him and I wasn’t going back on that….

..I got him by the armpits this time, hauled him up, kissed him hard, and whirled him around against the wall shoving his shorts down with one hand while I pinned him there with the other, raw one. He thrust his ass out, and I bent my knees, found his asshole with my cock, and thrust forward, hard and without mercy.

I slammed forward, all violence and hurt, and then pulled back and slammed again….

Now Ace and Sonny are finally together. The town they have settled in is not a bad place to be, albeit dusty and in the middle of nowhere-in-particular. But it’s home and it’s a place they can be together and do all the things they have to to get their street car in the shape they need to win races, and make them some money. They’re also domestic together and Sonny likes to cook inventions such as beanie weenie. The garage is moving ahead and is coming together. And they hire a young girl, Alba, to help out. ‘Hire’ is an interesting word. Ace rescues her from some ‘charming’ boys, and a not-so-savoury teenage life, when he is at the local shop. Ace is a major rescuer and he adds to his little family here and there along the way.

I really liked Ace. He has (understated) empathy and a big heart. And does what he can to make things right. He’s a strong man. In spite of being broken or rough around the edges pretty much everyone is strong here. I think if Race for the Sun says nothing else it says that the human spirit can be incredibly resilient. Just has to be sometimes, life can suck for some people in this world more than others. And sometimes, in amongst all that, you can find love.

Ace’s issues come out pretty quickly and because it’s his POV the reader is inside his head from the get-go. Sonny’s ‘ghosts’ are there but they take their time to surface. Little things come up throughout that makes Ace wonder (as well as the reader) what the hell kind of life Sonny had as a child. What happened to him to want to be claimed, marked so drastically? There is one scene that is breathtakingly sad and desperate regarding Sonny’s absolute need to be marked –

The water was cold this time, but that was okay. The cold was needed, and it washed away the blood and the sweat and that strange, acidic tint of despair that had sunk into the tiny room while I’d marked us both, forever.

But nothing really makes Sonny feel secure. That he won’t be abandoned by Ace. Ace has to constantly promise Sonny he’s not leaving, that he will come back. He clearly states on a number of occasions what he can and can’t promise. But he promises he will never leave Sonny on purpose. He may ‘fuck up’ but he will never deliberately hurt Sonny.

This is a complex book to review properly. It is best read, not explained. If you like Amy Lane it will deliver for you. I have not often gravitated towards her books but I liked the premise of Race for the Sun. It didn’t let me down. I like psychological fiction. I expect it to be done well and realistic. I was more than satisfied with what was delivered here – two MC’s who had had hard knocks, one with extreme abandonment issues and an attachment disorder. One who saw things happen to his hero too young in his life, and has to take care of business in an unsavoury fashion, whilst looking after a very high maintenance and, at times, unstable partner. Who also had personal standards of decency and self respect – no using derogatory terms like faggot or retard is allowed. The characters are believable and they fit together for multiple reasons, including the fact that Sonny pleased Ace’s inner rescuer, (with Sonny he can never feel invisible), his inner adrenaline junkie, and his sexual desires. Ace grounds Sonny and can centre him when he loses his shit, when he loses his direction, he helps him actualise a dream. He protects him and makes him feel as safe as he’s ever going to feel. Bottom line, Sonny needs to be claimed and Ace is happy to claim him.

I loved this book. It was dark in places, it was violent in places. It was sexy in all the right, and wrong, places, and it didn’t miss a beat in terms of the characterisations and dialogue. All the characters were layered, and there are a few of them – from family, to friends, to associates, to an antagonist who lives down to the word scumbag. One of this years best books.