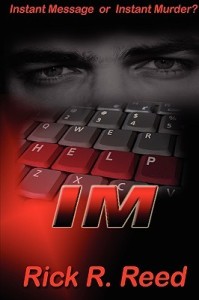 In the days of the internet, an entire new world has opened up to gay men.  No more relying on bathhouses or gay bars for random hook ups. Find the right site, add a quick profile and maybe a few photos and an instant message later two total strangers can meet for anonymous sex. Men4HookUpNow.com is one such site.  This is the perfect playground for horny guys looking for a quick fuck. Unfortunately it is also the perfect playground for a serial killer.  A serial killer who is picking men one-by-one and luring them in to a violent end.  Rick Reed pulls no punches on the violence.  The reader is along for the ride as this sadistic murderer kills his victims.

Openly gay Chicago Police detective Ed Comparetto is called in to investigate the murder of another gay man.  The man’s body is in such a horrific state that the detective is unable to stay in the presence of it for too long.  Minutes later Ed interviews a man who claims to have found the body of his friend.  This man identifies himself as Timothy Bright.  Timothy is in such an emotional state that it takes awhile for his story to come out but it eventually does. Over time there are more murders, each more violent than the other.  Ed has no leads and no witnesses. Timothy Bright has disappeared but yet he makes his presence known in other ways.  It does not take the reader long to see that the emotional Timothy is in fact the murderer that Ed is searching for.  The only problem?  Timothy Bright no longer exists.  Timothy Bright has been dead for over two years having been murdered himself.  This starts a downward spiral for Ed in his professional life.  How could he have interviewed a dead man?

Ed embarks on a journey to find the truth about the killings before others occur though not in an official capacity. He knows who the murderer is.  He now must find a way to prove that a dead man is responsible.  Along the way he meets Peter, a librarian he meets while doing research in regards to Timothy’s death.  They begin a tentative relationship that becomes strained because of Ed’s obsession with the murders and Timothy.  Ed refuses to give up.  He knows who he spoke with the night of the first murder.  He has seen photos from before Timothy died and he knows it’s the same person.  The question is how?

The reader is taken inside the head of a serial killer.  The story is told in different points of view from Timothy’s to Ed’s to the aunt who raised Timothy from the time he was a baby.  The aunt’s point of view is mostly told via old journal entries.  With each entry you see more and more of why little Timothy became who he was before his brutal murder.  You feel sympathy for this child who lost his parents at a young age.  You also feel anger for what he was forced to endure from the time he was a 13-year-old boy.  But about the time you start to really feel sorry for the young boy you are given the information of things that a younger Timothy had done long before any abuse was forced on him.  He had the classic signs of being a disturbed individual from a young age.

Had this been a movie, it would have been an edge-of-the-seat type where you know you should look away but you can’t.  You have to see what will happen next even if it is something so horrific that the images will stick with you long after the scene is over.  The author does not shy away from brutality of the violence.  It is all written with all the gory details.  Had it not been the book may not have been as realistic. There are also moments that will break your heart.  Secondary characters are introduced who slowly bring out the motives for the killings. Some will break your heart.  Some will make you sympathize for what the killer was forced to endure years earlier.  You will find yourself questioning everything about Timothy Bright. His body was found in his apartment two years earlier. His body was identified by the aunt who raised him.  How can a dead man be killing people two years after his own burial?  Who else could the killer be?  All questions are answered little by little as the story plays out.

This is a fantastic book and one that I highly recommend for anyone who is not squeamish or scared of graphically described murder scenes. I suggest trying to read it all in as close to one sitting as you can because if you are forced to walk away from it for even a little while you will be anxious to jump back into it.  It will also make you stop to think.  The internet is so full of danger but there are many who are willing to take chances that could ultimately cost them their lives.  IM = Instant Murder in the case of this book.  It starts with an Instant Message but that changes quickly.

I have read quite a few books by Rick Reed.  I have made him my personal reading goal for 2013. My hope is to read as many of his books as I can before the end of the year.  This is my 7th so far and I have to say that it ranks up there as my 2nd favorite behind Caregiver.  The story sucked me in from the very first page and kept me interested until I got to the end.  My only complaint (and it’s minor) is that I wish there would have been an extra page or two thrown in at the end. Otherwise an outstanding read.