“I’m very persistent when I want something badly enough.” He leaned in, his warm breath tickling, making Tackett clamp down on the shudder that threatened. “And I want you very, very badly.”

Tackett Austin is a Dom in his forties. He has never seen the need for settling down or training a submissive in his personal, day-to-day life. He’s been happy on his own. He has a successful business, is financially comfortable, has good friends, and enjoys going to Guards of Folsom for his BDSM requirements. Plenty of subs to choose from there. But something has been niggling at him since his friend Blake has collared Ty. His friends are happy and contented. It’s also his forty fifth birthday and this combined with his friends obvious happiness leaves him feeling alone and in a bit of a funk –

Tackett didn’t want a guy just sucking his dick; he liked to force them to take it. Vanilla didn’t do much for him, even when it was new.

Micah has known since seventeen that he liked spanking –

Micah is upbeat, hot, unfiltered in what he thinks and says, he’s keen and he’s tried everything from being a timid submissive to being a naughty pup around Tackett. Anything to see what would/could work to make Tackett take an interest in him. I found Micah to be utterly guileless and lovely. He has ADHD and trouble focusing, which doesn’t necessarily make for a great full-time submissive. He is sure about one thing, though, he wants Tackett Austin –

Blake chuckled. “I do believe you have an admirer.” Micah placed his hands on the bar in front of the customer at the end, spread his legs, and pushed out his tight little butt. Jesus, the kid was begging to be beaten.

“Nah. I’m guessing that boy is a terminal flirt.”

“He’s a flirt. all right. it makes him a very popular bartender, but he saves these kinds of extremes for when you’re around.”

Tackett’s good friends, Blake and Bobby and Rig, believe that Micah would be good for Tackett. They would like to see Tackett give Micah a go, take him on a s a sub, train him. And, at a pool party they organise, they make sure that Tackett and Micah are the only single men there –

Boldly he reached up and cupped the hard cock straining beneath the material of Tackett’s shorts. “Look around you, sir. Nothing but couples, and then there’s you and me. Bobby and Rig must have thought our kinks would make a good match, so stop thinking about all the other bullshit. Instead concentrate on what your body needs from mine.”

Tackett didn’t respond at first; he just sat there with that same neutral expression on his face like he couldn’t care less one way or the other. But Micah felt the throbbing pulse and the hardness against his palm…..Tackett slid into the pool, grabbing Micah’s ass in both his hands, and pulled Micah against his hard muscular body. “You have no idea what you have just unleashed, boy.”

So Tackett relents and takes on the cute but scattered Micah. Micah is a tactile creature and is demonstrative in all things he does, which is something Tackett enjoys. He is curious about Micah’s mind – he gives sass, nothing malicious more humorous and all over the place, but he also obeys commands. It’s a bit confusing at times but incredibly intriguing and Micah is sexy as sin.

What I liked, and what was written so well, was what both men were thinking and feeling throughout the book. You get both points of view. First of all Tackett sees Micah as being too young and thinks Micah is playing a game of which he knows nothing about. Then, because he is so unfiltered and scattered in his thoughts, Tackett doesn’t know whether he has the energy for what he has to do. He is quite unsure how to go about making things work on a day-to-day basis with Micah and is frustrated to a certain extent, not just at Micah but himself –

Tackett rubbed the back of his neck. Micah could tell he was at his wit’s end and had no idea what to do with him next.

The thing is, Micah is simple and sensible, he knows what he wants but he doesn’t know how to go about showing this to Tackett. He doesn’t know how to keep his thoughts from wandering and his focus in place. Micah thinks he has blown things with Tackett and that he can never get it right with his ADHD  –

He hated it. Hated that his stupid fucking brain was broken

Watching these two men get together and form a D/s relationship was really enjoyable. Micah is fearful of not pleasing Tackett but he just doesn’t know how to go about it. Tackett is fearful of how to train a sub and 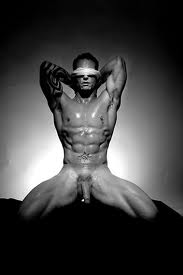 enter into a full-time contract, albeit for two weeks, but maybe, just maybe, beyond. The sex is off the charts hot and varied. Their pillow talk all kinds of sexy. I loved, loved, loved it. I liked the fact that Tackett spoke to his friend Blake about what to do and the rest he figured out for himself. That he genuinely decided he was worth it, Micah was worth it, having a proper go at their D/s relationship was worth it. When that happened a lot of things fell into place.

The well named Pup is a fantastic read from the beautiful cover through to the very end. I sat up until 2 AM reading and had 5% to go but couldn’t keep reading due to Fuzz-Eye. And here’s the thing, I remember thinking to myself about 15% through, “how will I go with this purely character driven BDSM novel?” No drama seemed to be forthcoming – there were no nasty exes in the background that anyone had to contend with. No homophobic parents, no PTSD, no angst anywhere to be seen. None of that was necessary because the wonderful characters that the author created carried this book brilliantly all on their own. I LOVE good, strong characterisations. I inhale that integral component  of a book for breakfast. There are some friends thrown in, but they truly are in the background, well utilised and genuinely likable. Tackett and Micah were a great pairing, the BDSM just right for the characters, and the sex, yes I know I already mentioned that, was even more fabulous. The relationship was not insta-love. Yes, Micah saw Tackett and had a feeling he was for him. He observed him and just felt it. He then pursued him. But their relationship grew and developed over the time frame allocated. And it was totally credible, even in a matter of weeks. I have several S.J.D Peterson books on my Kindle, why haven’t I read them before? This book was excellent reading from beginning to end.