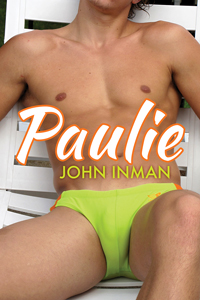 To the casual observer, Paulie Banks lives the perfect life. After all, he’s young, handsome, and rich. But Paulie has a secret. He’s madly in love with Ben, his old college roommate–and Ben is straight! Now Paulie has arranged a two-week reunion with his three closest friends to rehash their college years and get to know each other again. Jamie and Trevor are coming, along with their new lovers. And to Paulie’s amazement, even Ben has accepted his invitation.

Beautiful Ben. The one non-gay apple in the old college barrel. Paulie will soon find out if Ben has forgiven him for overstepping the bounds of friendship on the last drunken night they spent together.

With his La Jolla mansion spotless, a stunning new houseboy hired for the duration, and his heart pounding in both fear and anticipation, Paulie welcomes his old friends back into his life. Thanks to a whole lot of liquor and a clothing-optional dress code, boy, do the festivities begin!

Paulie, an aspiring writer, has secretly been in love with Ben for years. They were college roommates during their senior year of college and it was the best – and the most difficult – year of Paulie’s life. Every day he lived with Ben he wanted him. Watching Ben walk around naked made it worse. The problem? Ben is straight, though very accepting of Paulie’s sexuality and that of their friends, Jamie and Trevor.

Ben. Who was part and parcel of Paulie’s all-time favorite memory ever, and who probably, even now, didn’t know it.

Ben. His roommate in their last year of college. One of the three best friends Paulie had ever had.

After one too many drinks the night before their graduation, Ben and Paulie spend a night together, only to have Ben disappear not only from the small apartment they shared but from Paulie, Trevor and Jamie’s lives as well. There is no communication at all with the exception of a note here and there and a sympathy card when Paulie lost his grandmother. It’s now two years after college graduation and Paulie plans a two week reunion for him and his best friends at his large home. Surprisingly, Ben accepts his invitation.

In preparation for the reunion, Paulie cleans his mansion (left to him by his grandmother) from top to bottom and hires a houseboy, Jeffrey. Jeffrey is walking sex. He’s big at 6’6” tall, with apparently everything being proportionate. He’s also gay and drool-worthy. It will be Jeffrey’s job to make sure Paulie’s friends are well taken care of during their two week stay. It doesn’t take long after meeting Jeffrey before it’s obvious that he will be more than willing to do anything to keep Paulie and his friends well taken care of. <grin>

He was already wondering how he could sneak down the hall in the middle of the night to the houseboy’s room without his guests finding out. Not that they would care, he supposed. But still—it didn’t seem like the Amy Vanderbilt thing to do. He could almost hear her now: “A hostess simply does not fuck the help. It isn’t done. And if it is done, then it must be done very very quietly. Yet with great gusto.”

Paulie wasn’t made out of steel after all. His dick sorta was at the moment but he wasn’t.

When Paulie’s friends (minus Ben, who will be driving from Omaha) get off the plane you will immediately fall in love with them. There’s Trevor with his lover, Danny. Then we meet Jamie and his, Jack. Trevor and Jamie had been together during college but apparently ended with a bad break up shortly after. One look at the two guys in the airport and it’s obvious to everyone (their boyfriends included) that they have no qualms picking up where they left off a couple of years prior, their boyfriends be damned.

Trevor and Jamie turned and dutifully motioned their lovers forward like a couple of teenage boys reluctantly presenting their ugly prom dates to their slightly startled (and disappointed) parents.

“… Paulie, this is my lover, um, wait, it’ll come to me in a minute. And that’s Trevor’s lover. I have no idea what his fucking name is.”

Paulie has lived with guilt for two years over how he and Ben ended. He feels that in his drunken state on their last night of college that he took advantage of his best friend. Ben had enjoyed it. No doubt he had enjoyed that night but his leaving in the middle of the night forced Paulie to realize that his drunken advances had completely destroyed the best friendship he ever had. If Ben ever shows up, Paulie vows to apologize and promise to never touch his straight friend sexually again. Paulie will always love him, as that hasn’t waned in the two years since they last spoke, but he’ll make a effort to do nothing else to make Ben uncomfortable.

“What makes you think anything happened between me and Ben?”

When Ben arrives in the middle of the night everything hits Paulie square in the face again. Ben has only gotten more beautiful as time has gone by and it takes all of Paulie’s strength to remember his promise to be a good boy.

Apparently Ben has secrets of his own and there is more to his coming to California than reuniting with his old college buddies. He has come to make amends with Paulie – in more ways than one.

Once again John Inman has written a fantastic story. The cast of characters (both main and secondary) are hilarious. Normally the secondary characters fade in the background but not in a John Inman book and for this I am grateful. Between Jamie and Trevor and their not-so-secret rekindling of their love affair, to Danny who might just have plans of his own, to Jack, who also gets in the mix and not necessarily with the man he showed up with. Then there are Ben’s parents who aren’t in the story much but when they are, are important. And I mustn’t forget Hammer, Paulie’s amorous dog, who is not shy about humping anything and everything.

Being a mutt with the bloodlines of a hundred different breeds coursing through his veins, and all the morals of a serial rapist, Hammer had very eclectic tastes as far as sex went. He would hump anything. It didn’t even have to be a dog. Paulie felt a tug on the leash one day and looked back to find Hammer humping a fence post. He even seemed to be enjoying it. There was a crazed look in Hammer’s eyes that said, “Damn the splinters! Who cares!”

There is a lot of skinny dipping, nude drunkenness, public displays of .. uh .. affection and lots of alcohol consumption. There is also a beautiful love story between two men, who must make up for lost time.

Very rarely do I come across an author whose books I know I will love before I even read a blurb. John Inman is definitely one of those for me. It started with my love of A Hard Winter Rain way back when and I have enjoyed every other release since.

Thanks so much for the great review. Love you guys, and I love your new website too. Very classy.

You’re very welcome, John. Another great story. And thanks for your kind words about the new site. We are very proud of it.

Great review, Cindi. I have actually pre-ordered Paulie so I hope to get to read it at some stage soon. It sounds SO good.

I look forward to the giveaway.

Looking forward to reading this!
Congratulations John on your release day!

I’m loving the compliments. Thanks.