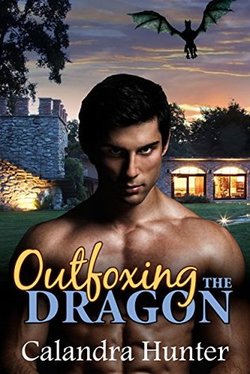 Brandon McGuire is a down on his luck fox shifter who gets a very tempting offer from two business men: Break into Damian Vasilescu’s mansion, steal some data and walk away with eight thousand dollars. The offer sounds too good to be true, but with no one home, breaking in should be easy, right?

Damian Vasilescu is a dragon shifter in the middle of his Frenzy, a period where dragon shifters are ruled by their dragon’s instincts. His dragon is on high alert when an intruder enters their territory, especially since that intruder is none other than their destined mate.

Brandon’s attempts to get answers from a frenzied Damian are hindered by their desire for one another. Why was he sent to Damian’s mansion? Who are the two business men and why did they set Brandon up to get caught? Can Damian overcome his Frenzy and work with Brandon to get their happy ever after?

And most importantly, how do you outfox a dragon?

This is a 37000 word stand alone shifter romance. No cliffhangers.

What a cute little shifter story.

Brandon, as the blurb states, is down on his luck. Due to budget cuts he lost his job as a teacher. He’s now living on his friend, Marshall’s, couch and getting more desperate by the minute. His bills are behind. He had to sell his car. His job prospects have dried up and he’s not sure what his immediate future will hold. Brandon is also a fox shifter. Fox shifters kinda go with the flow where wolf shifters and others are a bit more serious. Marshall, a wolf shifter, puts in a good word for Brandon with his alpha. Brandon really wants to do things on his own but he accepts the help anyway. The alpha gives him the phone number of two businessmen who are looking for someone – it has to be a fox shifter – to do a special job for them. The job is hush, hush but the pay is huge. After meeting with the two men he knows he’ll do whatever they want him to do because he needs the cash.

The job? Breaking into the mansion of another shifter to retrieve something that was apparently stolen from the two men.

Brandon’s sneaky fox side is all for the challenge. The only problem is that the owner of the house, who was ‘supposedly’ out of the country, shows up as Brandon is plundering through the man’s desk drawers. But the owner – Damian – wasn’t drawn to Brandon because he smelled an intruder. Oh, no. Damian is a dragon shifter and ‘his dragon’ was screaming, Mate! Damian is in what’s called his Frenzy. During Frenzy the dragon takes charge and the human part of the shifter is pushed in the background until it’s over a couple of days later. A dragon shifter during Frenzy who finds his mate? Well, let’s just say that it was a good thing that Brandon was a horny little bastard or it would’ve made for a very uncomfortable weekend. 😉 Had Brandon not been his mate the fox would’ve likely been killed by the dragon.

Brandon really does try to tell Damian why he broke into his house in the dead of night but Damian is thinking with his little brain. He’s not overly concerned about why his mate was in his office. Not yet anyway. He’s just happy he is there. The reasons do eventually come out, as well as other secrets involving the two businessmen who hired Brandon. I like how all that came together. I didn’t see it coming.

There’s quite a bit of sex in Outfoxing the Dragon and it’s written very well. If you’re a fan of the Mine! and mate types of shifter stories you’ll love this. Damian is very protective and more than a little smothering in the beginning but this is only during his Frenzy. When he comes out of it he calms down a bit. I actually thought ‘his dragon’ was adorable when he was guiding Damian to his mate.

Cute story with a couple of neat twists and even some humor. There are quite a few editing issues and way too many !!!! but thankfully not enough to take away from my enjoyment.

Wow, I nearly choked on my coffee when I saw this visual. Bam, hotness in my face.
Sounds like a nice and sexy little read. I need dragon and fox shifters now 🙂

Haha! Thanks, Kazza. Damian (re: the GIF) was just telling you good morning. 🙂 🙂 🙂 This was a fun little story to read. Sexy and with a little humor. Exactly what I needed.