More Than Most (More #2), Sloan Parker 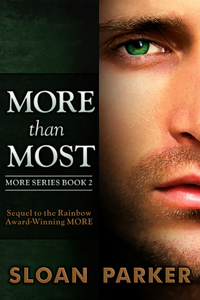 Richard, Luke, and Matthew return in this sequel to MORE, a Rainbow Award winner for Best Gay Contemporary Romance.

Investment manager and always-in-control Richard Marshall has just landed a historic estate he’s waited years to acquire. Gone a lot for his work, he’s seriously craving his men. Yet it’s more than just the sex he’s missing. Emotionally-traumatized Luke is still dealing with the aftereffects of his father’s attempt to kill him, and Matthew’s trying to find his way as part of a menage relationship.

When Luke and Matthew come clean with Richard about what they’ve been feeling, he knows there’s only one way to solve all his problems: keep them close by accepting their help to investigate why someone wants to destroy the mansion he’s trying to save. When it becomes clear he’s put his family in danger, Richard has to choose between giving up control and pushing away the men he loves right when they’ve started to heal and have rekindled the explosive chemistry that brought them all together.

A menage relationship is hard enough. Add in danger, intrigue, a haunted mansion, and three sexually frustrated men, and it’s not a typical love story. It’s much more.

More Than Most starts fifteen years prior to current day, when Richard Marshall was looking at going out on his own into (what is now) his investment business. He’s at a party at Edward Harrison’s property – the Harrison Estate – which Edward is going to sell and Richard wants to buy. Edward Harrison makes it patently clear, though, that he isn’t going to sell to someone like Richard.

“I don’t want to think about it. The disgusting things a faggot like you could do in my family’s home… Generations of Harrisons buried in the family cemetery out the back would turn over in their graves if I so much as considered you.”

But Richard won’t cop crap and he’s nothing if not a man of persistence and drive. He knows that he wants the Harrison Estate and won’t give up until it’s his.

“I do want this property, and someday it’ll be mine.”
Harrison laughed, an unnerving, malevolent sound that gave credence to Joe’s warnings. Then he looked me in the eye for the first time. “Over my cold. Dead. Body.”
I grinned at him through my own laugh, letting my humor last long enough to clearly irritate him.
“Well, you’re what? A hundred and five?”

Apart from the beginning, which establishes the tone, the book is actually set not long after More finishes. Richard, Luke, and Matthew are living full-time in a poly relationship at Richard’s condo. Matthew is going to college and studying a veterinary tech program and volunteers at a vet clinic and shelter. Luke is still in IT. And Richard has just achieved what he set out to, he’s secured the Harrison Estate. In order to make it happen he’s been away from home a lot, liquidating his assets and raising capital to buy the estate outright. Richard’s also organised people to invest in renovations to restore the house and create a boutique business with good projected returns. However, every single person who was going to invest has now bailed with no solid reasons as to why.

Meanwhile, Luke’s obsessive father has started contacting Luke from prison and he and Matthew have been dealing with the traumatic nightmares Luke is experiencing because of it, all while Richard is away. Richard has always been the glue that binds the men together – he’s a communicator, a conduit, a big protector, and he’s the dominant partner in the bedroom. Luke and Matthew have both missed having Richard around, and when he is, it seems he’s always on the phone or preoccupied regarding the estate. One of the good things about Richard is he listens. When the two men he loves express concerns about him working, and he learns about Luke’s dad, he kicks into protective mode. The initial result is he tries too hard to make sure his men aren’t worried or in harms way. When there are also issues with his purchase, that may well be potentially dangerous to all concerned, Richard tries to be in control. This causes some issues, but nothing Luke and Matthew can’t sort out if they initiate communication – something Richard normally does.

There are several things that made this book so good for me. The mystery is a good one, it isn’t easy to know who may be involved and exactly why. That 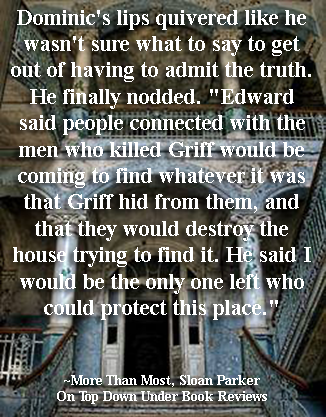 backers for the renovation have all inexplicably dropped out places Richard under some pressure. Is it Luke’s father, as Luke fears it is? Or, is it Edward Harrison pulling strings from beyond the grave because Richard ended up with the estate? And when they meet the elderly “ghost” of the estate, Dominic, and he warns that the people behind the death of Griff Harrison are coming back, is it real or imagined? The estate has a character of its own, as does the ever-returning Dominic. That there are some parallels between Griff Harrison’s life – and thereby the estate – and some of Matthew’s current feelings are all nicely written.

More is one of the best poly/ménage books you’ll ever read, but More Than Most is just as good, probably better. While More is about the chase-catch and love’s beginning intensity, More Than Most is about a deepening of the loving 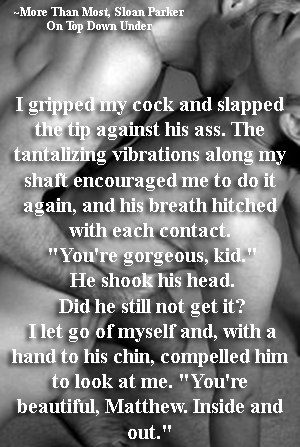 bond these men have developed, and are still forging. You can’t help but believe in their love and in them. I don’t doubt for a minute that they’ll grow old together and love each other until the very end. They can’t get married, something Matthew is quietly worried about, but they can show how committed they are, and they do that every possible way they can. Luke doesn’t run anymore. I loved Luke in this book, in More he was the weakest link for me, here his growth was incredible. Matthew is still an absolute sweetheart. He has his worries, and while a little insecure, he’s also better at expressing himself and believing in himself and their relationship just that bit more. Richard is perfect, that’s this reader’s opinion and I’m sticking to it. I loved him in More and I thought he was even more amazing in More Than Most. I was nervous going in because it’s his POV and I worried that Richard could have been ruined… that would have devastated me because I live and breathe characters.

There’s another good mystery/suspense element to More Than Most and I like that both books #1 and #2 have something interesting woven into the romance. Also, if you love Sloan Parker’s writing but you’ve put off reading this series because ménage bothers you, or if you’re on the fence about ménage in general, think about reading them because they’re such good sexy-romance reads. I’ll add that More Than Most has less sex than More, but it’s still scorching – one scene in particular is face-melting. Oh, and the kissing in

both is ooh-la-la red hot! There’s also no favoured partner, no cheating, no jealousy, no complicated dynamic to worry about. There is a loving relationship between three fabulous men of varying ages and it covers life with a little mystery thrown in as an interesting kicker. While having a past – don’t we all – the characters work well together, sharing love, companionship, and support. In a sometimes shitty world, Richard, Luke and Matthew make me happy and solidify my belief in love, and I’m perfectly happy with that. Cannot wait for Matthew’s POV. More Than Most in on my favourites shelf. Sloan Parker at her best. 5 Stars!

The first time I spent the night with someone in the Harrison Estate, it wasn’t going to be with a one-night stand.
It would be with someone special.
And the next time I walked into that house, this faggot was going to own the place.

Amazing review, Kazza! I can really tell you love these books. 😀

Thank you, Trisha. I really loved it 🙂

I’ve read a lot of ménage books since MORE and I always compare the others to it. None have come close. It will forever be one of my all time favorite books. Like you, I was a bit hesitant because how can you improve on a book as great as that one? I also know your Richard love and I would’ve hated to see that love wane even a little bit. I’m so glad that this one is every bit as good – if not better – than MORE. I’m so eager to jump into it. You know that Matthew… Read more »

I do love a ménage book. But there are, you know, ménage books, and then there are, hell yes, ménage books! I have always loved More and, like you, I do hold others up to its standard because More kicks arse.

I loved More Than Most, and it could have easily gone pear-shaped because of my Richard- love, but, much to my joy, it was just wonderful 🙂 🙂