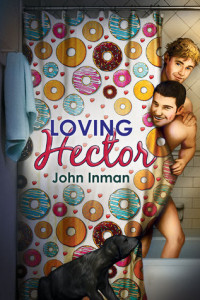 A hilarious tale of dognapping, kidnapping,  a scorned lover, a psychotic family, a really old grandfather who suddenly discovers he’s gay, disturbed employers, donuts, a cute dog and the two men in the middle of it all.

Dillard (Dill) Brown is a writer.  He has had three books published but he’s not exactly rolling in the money.  In order to keep writing he takes on whatever part time job he can.  He has worked at every fast food joint you can imagine and has gotten fired from each for various reasons. He has never been in love but he dreams of someday meeting the man of his dreams.  In a gay bar one night he meets Hector, a Hispanic man who is almost a foot shorter than his 6’3″. Hector is called away suddenly but Dill is convinced this is the man he has been waiting for all his life.

Dill could smell the shampoo the kid had washed his hair with, and it must have been recently.  Something with apples in it. Lord, between his Juicy Fruit breath and his apple-scented hair, Dill wondered if the kid smelled like fruit all over.  Would his ass smell of lemons?  His dick of bananas and tangerines?

Dill was getting hungry.  And not particularly for fruit.

Once Hector is called away from the bar, Dill commences to get so drunk he stumbles home, still thinking… and singing…. about Hector.

He meets Hector again a few days later but Hector isn’t exactly eager to become part of Dill’s life.  Dill had dognapped Hector’s dog so the meeting does not go well.  Of course the plan wasn’t to dognap the dog, he just wants to keep him.  Dill had rescued Noodles the dog (later known as Chester) when he had gotten away from Hector somehow and had been attacked by coyotes behind Dill’s family’s home.  Dill is a hero.  The dog loves him. He should be allowed to keep the animal, not the bad pet owner who the dog had gotten away from, right?

He was like a superhero, out to protect the innocent and save the world from poopheads.  All he needed was a pair of tights and a fucking cape.

This begins one of the funniest books I have read in a very long time.  I literally started giggling within the first few pages and did not stop until after The End.

Love is like hemorrhoids.  It’s a pain in the ass.  Somebody ought to make a suppository for it.  Preparation L. Give me two boxes.  Quick.

The first few meetings between Dill and Hector do not go well and it looks like Hector will not be willing to give Dill a chance.  Chester the dog has other plans.  Chester somehow manages to find his way to Dill’s home again and again.  Dill is in love for the first time (with Hector and the dog) and he’s not willing to allow Hector to get away regardless of how Hector feels.  Hector however has recently gotten away from an abusive boyfriend, a cop, and is leery of jumping into another one, not to mention the ex is dangerous.  Hector has major trust issues, on top of the fear of the ex who just happens to be a cop.  Eventually Hector agrees to dinner and this dinner quickly turns into a whole lot more.

Then there are the secondary characters and these folks are what made the book laugh-out loud funny.

First there is Dill’s mother who is convinced that her son is not gay.  It doesn’t matter that he came out of the closet years ago and that everyone else believes he’s gay, his mother flat out refuses to believe it or discuss it even going so far as keeping on with Dill about bringing a nice girl home for dinner.  Her husband, a relatively quiet man, merely tolerates the woman.

Don’t misunderstand.  He loved his folks.  He truly did.  But it was the same kind of love people have for peeling off scabs and ripping out hangnails.  Both practices feel good–but in an agonizingly horrid, teeth-grindingly painful kind of way.

Then there is Gramps, Dill’s grandfather.  Gramps made the book for me.  Every single time the old guy was mentioned I started giggling and I couldn’t stop.  He’s at least a hundred and fifty years old (Dill’s words) but he has suddenly decided that he’s gay like his grandson. Apparently Gramps had hooked up with another man once 50 or 60 years ago and he is convinced that he was meant to be gay all along.  He acts on it. Often.  I finished this book hours ago and I still laugh when I think about Gramps and his hook-ups.

“Wrap a feather boa around Gramp’s neck and slap a derby on his head and he would look like the poster boy for cognitive dysfunction.  Dementia’s Hunk of the Month

“Your mother’s a witch,” Gramps said without preamble, “and your father’s an asshole.

Dill’s mouth fell open.  Then he closed it when he saw a sneaky little smile creep across his grandfather’s face.

Apparently the only thing they truly had in common, Dill’s father and grandfather, was the good sense to know Dill was indeed a wienie whomper.  As gay as flowers in May, tra la.  But they didn’t care.  They loved him anyway.

“So what did Dad say when Gramps threatened to shoot him?” (Dill asks his mother)

“He told your grandfather he’d appreciate it.  That way he wouldn’t have to shoot himself.  He’d even load the gun for him and aim it if he had to.  He also said that if your grandfather was too old and feeble to pull the trigger, then he would give him a hand with that too.  I’m not sure he was kidding, Dill.”

“Wow.  If I wasn’t as fruity as a peach cobbler, that’s the kind of grandfather I’d want to be.  Can I go with you to look for him?” Hector asked.  “I’ll put my hard-on away.”

“No shit,” Hector said, hanging onto the dashboard with his nose pressed against the windshield like a Rottweiler. “They call it the Wrinkle Wroom.  And that’s an old wrinkled gay guy with his hand on your grandfather’s ass.  I guess that saggy little man with the feather boa around his neck who looks like a Castro District garden gnome is your grandfather.”

Then we meet Dill’s new bosses at Yum Yum Donut’s.  There’s Lily, the owner, who is Vietnamese and who screams like a banshee.  The baker is her husband, Thorolf, a German immigrant whose ass is so big Dill was always a bit startled to see there were no presidential heads carved on it.

Of course we meet Hector’s old boyfriend who is not willing to let Hector go.  He starts off doing minor things like writing Dill a ticket just because he’s a big, bad cop and he can.  This leads to stalking and threats and eventually to the kidnapping of Hector.  Dill can’t have that so between him, Lily, Thorolf and Gramps they embark on a crazy journey to rescue Dill’s man.  The way this is done is so funny that I could not stop laughing the entire time.  Throw in a group of other ‘rescuers’, splattered pastries and a protective dog and Dill saves his man and they live happily ever after.

Overall, a hilariously entertaining book.  It takes a lot for me to laugh out loud while reading but this author writes humor well.  I have read one other by him and it was a serious one (that I also loved).  I thoroughly enjoyed seeing his humorous side.  I can’t wait to jump into his others. John Inman has definitely gained a new fan.