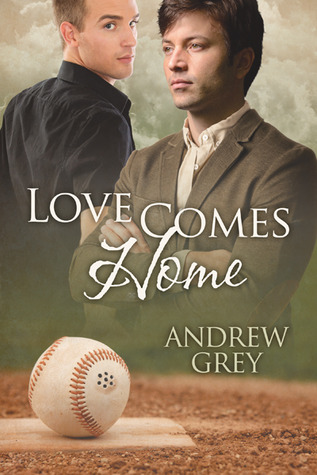 I have read a lot of Andrew Grey’s books but the ones in the Senses series will always be my favorites. I was hooked with Love Comes Silently (one of my favorite books of all-time) and that continued with Love Comes in Darkness.  I knew before I picked up Love Comes Home that I would enjoy it as well. Each story is unique. They all tell the story of a character with a disability, with a love story thrown in.  I can’t imagine anyone reading this series without getting tears in their eyes at least once. I knew to have tissues handy after I read the first book. To me, that says something about the quality of an author’s writing. If I can be brought to tears over the emotions conveyed in a story, that author has a rare talent. Andrew Grey has done this for me with all three of the Senses books.

Davey Hampton is a typical ten-year-old boy. Active, and involved in baseball, he is a good player until suddenly he starts striking out a lot and not playing as he had in the past. A spectator in the crowd, an ophthalmologist, suggests to Davey’s father, Greg, that he have Davey’s eyes thoroughly checked. One visit, and that’s all it takes for Greg to be forced to face the fact that in a matter of months his son will completely lose his sight. This is as a result of a genetic disorder that they were not aware of. Greg’s heart breaks knowing that his only child will eventually go completely blind. 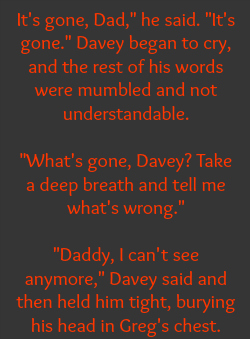 Greg, an architect, is visiting with friends when he meets Tom Spangler. Tom is wealthy and used to getting what he wants. When he meets Greg, he wants him. When they do manage to go out on a date, the worst happens. Davey, staying with Ken, Patrick and Hanna (of Love Comes Silently), loses his sight completely. Greg, of course, is convinced that his and Tom’s first date will be their last, regardless of any connection between them. Who would want to be with a man who had the responsibility of raising a blind child? Only Tom doesn’t run away. He immediately begins researching what is called beep baseball, a sport similar to regular baseball, but for the blind or sight-impaired, and brings it to Greg’s attention. Greg hasn’t handled his son’s blindness well. While he has been there completely for his son, he has not handled it well himself. Once Tom forces his way into their world (in a good way) and Greg sees Davey’s excitement, not only does Davey continue to play a sport he loves, but his father manages to find love along the way. 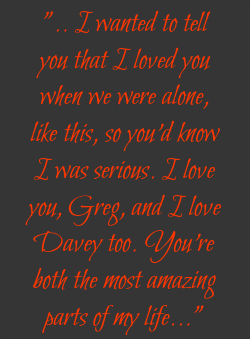 This is a wonderful story. One thing I love about this series is that the reader is allowed to revisit characters from the previous books. These characters play a huge part in subsequent stories. In Love Comes Home, once again I had the pleasure of seeing Ken, Patrick and Hanna from Love Comes Silently. Then there were Gordy, Howard and Sophia from Love Comes in Darkness. I am a sucker (as my blog partner can attest) for stories with kids in them and this series focuses highly on children and family.

Then there are the other characters. I loved Greg and Davey  immediately. Greg only wants what’s best for his son but he doesn’t know how to go about doing the right thing. Davey is a typical boy who just wants to be able to do the things he did before he lost his sight. I liked Tom, but I admit to having to warm up to him a little. He came across as a bit forceful for someone who had only met Greg and Davey one time. I wasn’t sure what to make of that at first but as the story played out I saw where he was coming from. There is Joyce, Davey’s mother and Greg’s ex-wife, who has not been part of Davey’s world for years, but yet the minute she finds out her son is blind, she thinks she can come back into his life and be a mother. She comes for a visit, a doctor in tow, convinced that she knows what is best for the boy whose life she has not been a part of in a long time. I didn’t like Joyce, nor did I like her doctor friend, but love how both were written. I also love how she was handled by Greg. Of all the characters, both main and secondary, I have to say that my favorite is Skip, Tom’s best friend, who flew in from New York for a visit. I absolutely adored him. I hope he gets his story soon, as he kept me entertained each time he appeared in the story.

“One of the dancers just stood in the doorway and waved at me”–another giggle–“and it wasn’t with his hand,” Skip sang.

The love story between Greg and Tom is a slow-build and written exactly the way it should have been. Greg’s entire focus is on his son and it takes awhile for him to realize that Tom is the real thing. Tom is used to being the center of attention in a relationship so he has to take a step back and accept that Davey will always be number one for Greg, as he should be. The way their relationship comes together is written perfectly. 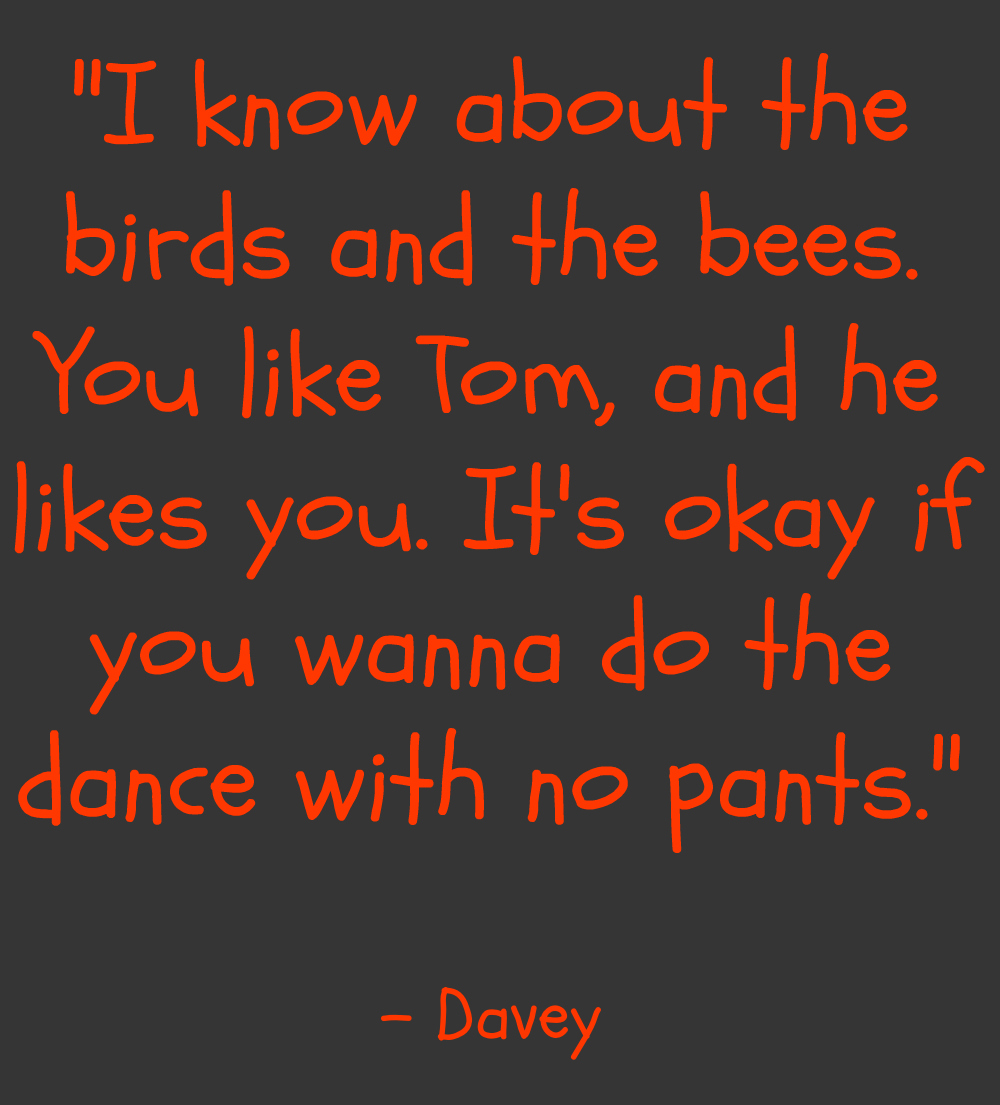 I mentioned the teary moments, but there are humorous ones as well. Davey made me laugh out loud a couple of times with some of his comments to his father.

Overall, this is another outstanding book by Andrew Grey. I smiled a lot. I got misty-eyed more than once. In the end, I fell in love with yet another group of outstanding characters.  As a mother of a former high school baseball star, I loved learning about beep baseball, something I had only been faintly familiar with before now. While it’s explained in detail in this story, at no time does it come across as a manual for the sport. It is described in a way that will have the reader eager to know more.  I can’t wait to read the next Senses story.

This sounds like such a great ‘Cindi’ book. The quotes are lovely and it looks like there is another character you would like to see more of next. Love the quotes they are just right for the review.

It just reminded me that my BIL was a referee for the Blind Cricketers Association here for years. So I love the beep baseball.

Thank you! It was definitely a ‘Cindi’ book. Such a wonderful story, with such amazing characters. I adored the friend, Skip. I hope he has his own story soon. I did not know that about your BIL. I have heard about beep baseball over the years but didn’t really know much about it. What a wonderful sport. I couldn’t imagine my oldest having to give up baseball when he was ten like Davey did in this story. That was his life for thirteen years. He was very interested while I was reading this, even pulling stuff up on Google about… Read more »

Thanks, Letti. It’s a great story. The entire series is amazing.

Like the review. I have to look at this when my rare sweet side comes out to play.

Bring that sweet side out to play, Jay.

Thank you so much. I love the review and the quotes are wonderful. A big hug to you. There will be another story, its already written and will be released later this year. Love Comes Around.

You’re very welcome, Andrew. I love this series and I can’t wait to read Love Comes Around.