Keeping Lance is Part Two of the Taking Lance Series.

Rick Preston has been hooking up with his former stepson on and off for three years. Rick is almost forty-three and Lance has just turned twenty-one. It’s just sex, right? Wrong. Somewhere along the way real feelings become involved and Rick has to either decide to move forward with the much younger man or take a step back and allow Lance to be happy with someone his own age. Throw in Rick’s girlfriend, Lance’s former boyfriend, and a couple of others who try their damndest to keep the two men apart, and Lance and Rick must fight like hell to finally find their happily-ever-after. MM, MF, MMF, Bi-Erotica, Older Man/Younger Man, Stepfather/Stepson.

Keeping Lance picks up three years after Taking Lance, and while Rick and Lance see each other for major events, they haven’t been an item in that time. Lance is off at college and Rick has been with another woman. Lance also has a partner, Marc. Lance is young and needs to get out into the world. Both guys are stuck on one another but neither will fess up –

Ah, Rick. My former stepfather. My former lover. The man I have been head over heels in love with for three years. He doesn’t know this, of course, and I’ll never tell him. He would probably laugh in my face. That would destroy me.

You know how both men feel about the other but neither can admit how they feel for different reasons – Rick feels Lance is too young to commit to him and it won’t work. But they still fuck when they get together. However, it is now Lance’s 21st birthday and things are not going so well for him. His biological mother, Jenna, somehow gets his phone number and is her usual self, his car breaks down in the bumfuck boonies and he needs to rely on Rick to come and pick him up. Mind you, Lance makes the most of his time spent at the gas station he stops at with the attendant.

I hear Brad mumble “holy shit” and looking at my former stepfather, I have to agree. His age be damned, he could easily be the cover model on any magazine.

When Rick turns up to pick up Lance, Brad, Lance’s gas station conquest, notices how sexy Rick is and Lance has to agree.

But things do not go smoothly. Rick’s new woman, Claire, makes it clear she doesn’t like Lance… when Rick is not around to hear. She feels that Lance is after Rick’s money but nothing could be further from the truth.  Lance senses Rick may be distancing himself but he is just as attracted to Rick. And Rick is more than glad to see Lance again, just the stubborn pride and fear of the age difference stops him from letting himself go at an emotional level. But he has a new car for Lance for his 21st birthday.  Rick’s birthday present to Lance is pretty good, oh, and the car is too. 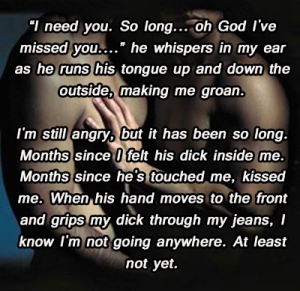 Rick wants Lance but he pushes him away when Lance finally comes out and lets him know how he feels, that age is just a number. Rick thinks age is an issue. He makes the argument that Marc is a good guy. He is closer to Lance’s age anyway. While Rick makes sure that Lance is set up financially, he did that in the first book, he is a bonehead and pushes too hard. This time Lance takes off for good, Rick realises what he had, and what he has done.

On top of this arc, there is Rick’s ex wife, Jenna, Claire and other people scheming and causing trouble in the background. The plot from Part 1, Taking Lance, is brought together with this story really well. I won’t say anymore as it is not long.

Keeping Lance has mostly gay sex scenes but there are het scenes and bi scenes. Rick does have a girlfriend in the beginning, and later on he meets a married couple who like to swing…and the wife is a gouger. Ouch! is all I can say. But in this scene, which is pretty nastee sex, there is a young guy named Travis who is caught up in it all – and Rick does him right – he definitely has a back story. I hope he gets his own story soon.

Although Keeping Lance is the second part of the Taking Lance series, it can be read as a standalone. The author makes sure the reader is caught up at the beginning.

I love your review. I love the quotes (and the pic). I want a Lance of my own. He’s more legal this go ’round, so can I keep him? 😉

Kazza, thank you so much for such a wonderful review! I love the quotes you pulled and I love the photo. I’m so thrilled that you’ve enjoyed my stories about two of my favorite guys. 😉 Travis will have his story soon, as will Marc, Lance’s ex. I hope you enjoy theirs as much as you did Rick and Lance’s.

You’re welcome. I have enjoyed the series so far.

I look forward to Travis and Marc, that is good news.