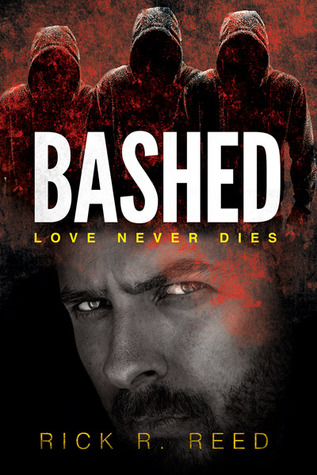 Rick R. Reed stopped by On Top Down Under on July 17th with a guest post and giveaway as part of the BASHED – THE LOVE NEVER DIES blog tour. You can see the post here.

It should have been a perfect night out. Instead, Mark and Donald collide with tragedy when they leave their favorite night spot. That dark October night, three gay-bashers emerge from the gloom, armed with slurs, fists, and an aluminum bat.

The hate crime leaves Donald lost and alone, clinging to the memory of the only man he ever loved. He is haunted, both literally and figuratively, by Mark and what might have been. Trapped in a limbo offering no closure, Donald can’t immediately accept the salvation his new neighbor, Walter, offers. Walter’s kindness and patience are qualities his sixteen-year-old nephew, Justin, understands well. Walter provides the only sense of family the boy’s ever known. But Justin holds a dark secret that threatens to tear Donald and Walter apart before their love even has a chance to blossom.

I’m going to sound like a broken record, as I’ve said this in almost every review I’ve ever typed of one of Rick R. Reed’s books (and I’ve read a lot of them), nobody, nobody writes about real issues like he does. Bashed is one of the most real, and most heartbreaking, of his to date. The prologue made me sad and it made me extremely angry. Sad, because I knew what was about to happen and that someone would be losing his life. Angry, because no one, regardless of their sexual orientation, should have to worry about the safety of walking to their car after a night out. Even angrier still because these men were attacked solely because they were gay and the ‘bashers’ didn’t approve of their lifestyle.

“… I love you, Donald.” He gave a small grin and looked down at the ground for just a second, almost as if he was embarrassed, and then said, “And I always will. This is a forever thing.”

Bashed is the story of a hate crime committed against Mark and Donald, after the couple spent a few hours at their favorite nightspot. Three men, one armed with a baseball bat, attack them as they walk to their car. Mark doesn’t survive the attack and Donald is left lost and alone. Mark may have been killed that night, but he’s still very much there, and I’m not referring to just in Donald’s memories. At first Donald thinks he’s hallucinating but it doesn’t take long before he realizes that Mark is really making these appearances. Is he there to help Donald as he mourns his loss or is he there to protect him? Does his murder need to be solved before Mark can move on to the other side? The answer to this lies far into the book and I’m not going to spoil it.

“I just wanted to make sure you were okay.” He paused for a moment, as though he was thinking. “And to tell you that, no matter what, we’ll always be together. Love never dies.”

Then there is Walter, Donald’s new upstairs neighbor. Walter is very close to his sixteen-year-old nephew, Justin. Justin’s mother would never be called mother of the year, and ‘Uncle Walter’ is really the teen’s only adult influence. But Justin has secrets that can not only destroy his own life but can change the relationship with his uncle forever if they become known.

Walter is immediately attracted to his new neighbor and does pretty much anything he can to get his attention. What he doesn’t know is that the neighbor, Donald, is mourning the senseless murder of the only man he ever loved. Eventually, Walter and Donald connect but the first time isn’t quite what Walter was expecting. Oh, he didn’t complain (by any means) but let’s just say that particular connection didn’t take place in the halls of the apartment building.

Then we come back to Justin. When Justin discovers who his uncle’s new neighbor is, to put it bluntly, he freaks out. Justin has never approved of the fact that his uncle is gay but he accepts it as long as Walter doesn’t shove it in his face. Unfortunately for Justin (and others) the one time he is forced to see it instead of just hear about it is when the secrets start to unravel and Justin opens a door that will never be able to be closed again.

This is a heartbreaking story. The reader is very aware of the love Mark and Donald feel for each other moments before the attack. You want to rush in and stop what’s about to happen but you know you can’t. Then later, little by little, Donald begins to remember things (with Mark’s help) about the attack, things he had forced himself to forget because they were too traumatic.

Then there is Walter. Walter and Donald kinda/sorta have a thing starting but what happens when Justin’s secrets come out? The bashers weren’t caught and are still out there, so is Donald in danger because he’s the only living witness?

There is so much more I could say about this book but I’m not because I feel that everyone needs to read it. Yes, it’s a difficult read, but it covers something that is (unfortunately) all too common in the world today. Why should anyone have to worry about being beaten – or worse, killed – because of who they love? Like I said above, this book will have you emotional but it will also make you very angry because you know that what happened to Donald and Mark happens all too often in the real world. As hard as it was to read, once again I applaud the author for writing about a subject that is all too prevalent in the gay community.

While not a traditional love story, the story between Mark and Donald is beautiful, yet tragic. You will later be eager to see Donald take a chance on new love with Walter. I loved the ending.

Another outstanding book by Rick R. Reed. I love the cover. It’s perfect for the story.

I think the cover is very menacing It definitely achieves what it is going for.

You know how I feel about the subject matter. Scares the heck out of me.

It was hard to read because you know going in what is going to happen. It’s an excellent story, sad or no, that does cover something all too common in the real world.

I do know how you feel about the subject matter. It’s scary as hell.