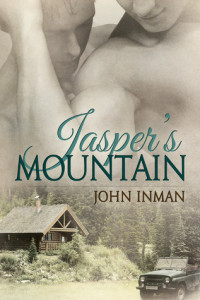 Jasper Stone is a simple man.  A not-so-successful author with six published books under his belt, he lives on a small ranch in a small cabin surrounded by his ninety-acres of land, right on the edge of the Juniper Mountains. He’s right dab in the middle of nowhere and he likes it that way.

Jasper’s ranch wasn’t really a working ranch because nothing much grew there aside from Jasper’s stories, except taxes and alligator lizards. Jasper had alligator lizards up the ying yang. Not literally, thank God.

Married once and knowing he will never go down that particular road again, he is as happy as he can be on his secluded ranch surrounded by his collection of dogs and cats. Jasper is not a fan of people in general and he is just fine living day after day not seeing another (human) soul.

Jasper wasn’t particularly fond of people. On the whole, Jasper thought people sucked. And not in a good way.

He has a large enough savings stashed away so he’s not starving. He can get up every morning to a beautiful sunrise and go to bed in the evenings after the sun sets and never be bored or feel the need for any companionship other than his variety of animals. Once the marriage to the bitch ended he finally admitted to himself that he was gay and if sometimes he needs more than the company of his hand? Well, there are bars a few miles down the mountain with a variety of men willing  to help him take care of that little problem.  He doesn’t need anything but his cabin, the mountains and his animals.  At times though, he does wish he had a man to share his life, and his mountain, with.

Jasper often suspected if his ex-wife knew how happy she had made him by leaving, she never would have left. That’s the kind of woman she was.

Jasper goes out to take care of his persistent hardness problem (he could tell by the recurring bulge in the crotch of his blue jeans that Jasper Junior was aching for a little action…. Anonymous. Emotionally unconnected. Sometimes Jasper didn’t know why he bothered. His dick would have to explain it. He certainly couldn’t) and comes home to find his cabin door wide open and all his lights on. Finding nothing out of place, he eventually assumes he had, in his rush, just left the door open and the lights on without thinking because he was in a rush to get laid.  He puts the matter out of his mind until the next day when he is building a pen for two little pigs that will soon be taking up residence.  Seeing a small footprint next to the pen,  he realizes that maybe what he saw the night before was not a result of his rushing off in a hurry. Jasper is a large man so he knows the print is not his.  The footprint looks as if it belonged to either a teen or a small adult.  Who could have been on his property? He’s literally far enough away from civilization that no one would accidentally stumble on his property. It is early the next morning before he discovers the truth.

Timmy Harwell is a small-time thief. When he steals a fancy Cadillac for a joyride, he’s not expecting to find thousands of dollars in cash hidden away inside. It doesn’t take long for him to discover that of all cars to “borrow”, the Caddy is one that might actually get him killed. It belongs to a major drug lord and if Timmy is found with the vehicle and the cash, his life is over.  He decides to get rid of the car and cash and to try to hide out for awhile. What he doesn’t expect is to get deathly ill while on the run.

Timmy has been hiding in the bushes for a couple of days, getting weaker and weaker by the minute. He knows something is wrong with him (not just the heat) but he has nowhere to go. He has had very little to eat for days other than a few apples and a couple of other things taken from Jasper’s kitchen a couple of nights before. He spends his days watching Jasper work around his property and one of Jasper’s dogs (Lola) keeps him company,  with each minute Timmy getting sicker and sicker. When a rainstorm hits is when Timmy’s health takes a turn for the worst.

He was sick as a dog, now.  Had thrown up twice.  His poor body was being battered by both chills and fever. They sort of came in spurts.  He was dying for another drink of water, but he knew he had to stay hidden until he figured out what to do.

He somehow stumbles to Jasper’s newly-erected pen and collapses inside, literally on the verge of death. When he is found by Jasper the next morning, he is soaking wet and unconscious. Jasper immediately brings the young stranger into his home and begins to care for him, never once thinking of turning him away.

Very slowly, Timmy’s fever starts to abate and he is amazed by the care given him by Jasper. Timmy is a total stranger but not once does Jasper treat him as if he is a burden. It takes a few days for Timmy to get better but when he does, there is a sexual attraction that neither man can deny. Acting on it, however, is something Jasper is hesitant to do because Timmy has secrets…. secrets he is not willing to share. Who is Timmy running from?  The police?  Is he a criminal?  How in the world did he end up at Jasper’s place so far away from civilization? Timmy is not forthcoming with any information and when he does answer questions, Jasper knows the answers are lies and he refuses to start any type of relationship without trust. He is growing to care for the (much younger) man and he wants complete honesty or nothing….. well, he does really, really want sex. Timmy, however, has other ideas and he has plans. These plans are acted on when it looks like Jasper is about to force him to go. Unfortunately, Timmy didn’t plan on falling in love with Jasper. What happens when his secrets come out? Eventually they begin a (hot) sexual relationship but without Timmy coming clean, Jasper will not let the relationship go beyond the bedroom.  And Timmy knows that once his real story comes out that he will be pushed aside. Who would want a thief?

Love does enter into the relationship but neither will voice it. Jasper, because of Timmy’s lies. Timmy, because he’s scared. He has never felt love before (given or received) as he had a hard life growing up. What he feels for Jasper scares him because it’s new. It also terrifies him because he knows that once his lies are exposed that Jasper will no longer want him to be part of his life.

“I’m not used to being so genuinely liked, you know.  I keep wondering how long it will last.  I keep wondering when you’ll get tired of having me around. Is it just sex, or are we actually becoming friends.  To tell you the truth, I’m a little confused by it all, Jasper.”

“… I don’t really care what brought you here, Timmy.  I’m just glad you’re here.  And if there’s anything I can do to help you, I will.  But you have to tell me the truth. I can’t remedy a lie.  No one can.”

There is a little bit of violence, a little sadness, some funny moments and of course, hot sex.  But in the end, there is a beautiful love story between two men. I am a huge fan of books where the two main characters have a substantial age difference and in this case, Jasper is thirty-two and Timmy is twenty. Granted, twenty is a little young but he is written where his age doesn’t shine through like most books I’ve read with a character of that age.   His difficult childhood forced him to grow up quickly and this is evident in his story.

All the animals are adorable, even Fiji the cat who has a huge fondness for alligator lizards. When Jasper got his piglets, I fell in love with them as well (I know, right, pigs!) The resolution is unexpected and written well.  It took a very dangerous situation for all of Timmy’s secrets to come out, but when they did I was very pleased with the outcome.  I do wish there would have been a quick epilogue added but I really have no complaints with the way everything ended. Jasper and Timmy get their happily-ever-after and I ended this book happy with the way everything was resolved.

Once again, John Inman has written a wonderful story. This is not your classic John Inman funny book. While there are the occasional funny lines that I have grown to expect from this author, in the end it is a serious story. I actually discovered John Inman when I read A Hard Winter Rain over a year ago so my initial respect for him and his writing started before the funny books that came later.  It was nice to see his serious side once again. He can easily switch between the two without missing a beat. As always, I will be reading the next book this author releases as soon as I can get my hands on it.

I do not want alligator lizards up the ying yang, sounds painful 😛
This book sounds like a very good read. Great review, Cindi!

I really like this review, Cindi. I like the way it is written, interspersing quotes from the book with the summary to give prospective readers a feel for the style of the book. I agree with you that John is a very balanced writer who can handle comedy, suspense, pathos, and romance all equally well. Thanks.

Thanks, Ann. I tend to get a bit wordy when I really love a book and I’ve yet to read one of John’s that I didn’t love completely. He became a favorite with his first book and I try to read his new ones as soon as I can. 🙂

Enjoyed your review, Cindi. Like you, my first John Inman story was A Hard Winter Rain. I have this one pre-ordered and I can’t wait to read it.

Congrats on the new site. It looks great. 🙂

Thanks, Lisa! We are proud of the new site. It’s still a work in progress but we are getting there. 🙂

I have no doubt you will enjoy Jasper’s Mountain. I look forward to hearing your thoughts when you read it.