How to Heal a Life (The Haven #2), Sloan Parker 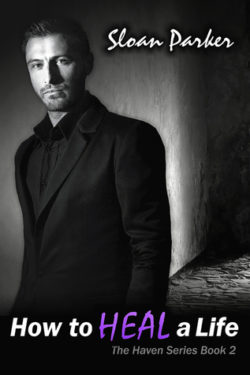 Blurb:
Seth Fisher has been to hell and back, but he has no intention of letting the torment of his past destroy his future. He thinks he’s doing good. He’s working again, talking, laughing, living. But everyone else still sees him as broken.

Except for one man. Raymond Vargas.

If only Seth could leave his apartment alone without a panic attack, then he could prove to everyone he’s going to be okay. And he could tell the one man who has never let him down that he wants him.

Raymond Vargas has spent the past two years trying to make up for what happened to six young men who were tortured at the hands of a member of his club. He’d do anything to keep them safe, to help them heal and move on, to help them forget they ever set foot inside the Haven.

If only he hadn’t fallen in love with one of them.

If only Seth wasn’t still in danger.

“He’s never going to forget me. Never. If he has the chance, he’ll come for me. Just like he said.”

Seth Fisher is recovering from the abduction, rape, torture and near fatal beating he received at the hands of Prescott and Henderson at the end of the previous book, How to Save a Life. There were six young men in total that Prescott abducted out from under the then security at The Haven two years ago, something that Richard Vargas, or Vargas as he’s affectionately known, has felt immense guilt about since. He’s placed a lot of money and resources into protecting the six young men ever since, several of whom have left town, but Seth, Dylan and Aaron remain. Seth and Dylan, who became close friends as a result of their ordeal, are flatmates. Seth was the most seriously injured, the one Prescott paid extra attention to during captivity, and he nearly died as a result of the beating Henderson dished out at the end of weeks spent in Prescott’s callous hands. The prologue lists the injures to Seth and could certainly be a little confronting for some people.

Vargas has watched over Seth since he was found bloody and broken on a table at the Haven. At first Seth wasn’t physically or emotionally functional, but over time he continued to improve. Vargas remained at his side throughout his stay in hospital and is still there afterwards. Seth is partially in a wheelchair and partially needs a cane to be mobile but they are hoping he can rely less on the wheelchair soon and then, hopefully, the cane. He works from home, his friends come to visit him, and his dog, Charlie, has the help of Toby, Dylan, Ryder – a neighbour – and Vargas to go out for walks. So there is no need for Seth to venture out on his own until he’s ready. Mind you, Seth would love nothing more than to be able to go out on his own. He hates that he has anxieties and a damaged body.

There are several story arcs in How to Heal a Life. The main one is the slow-burn relationship between 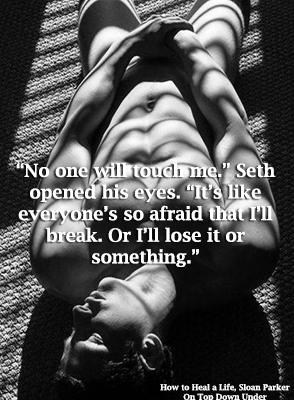 Vargas and Seth. The reader knows these two men love one another but neither of them allow themselves to think it. Don’t get me wrong, these guys have spent a fair bit of time together and they know how they feel but they can’t and won’t go there initially. Vargas is seized up by the immense guilt he’s still feeling. He never wants to push Seth either, who may never be emotionally ready to have a loving or sexual relationship again. Seth is trying to heal and it can be hard for him to walk let alone deal with the pain. He also has the word mine carved into his skin, as well as other scars. Having said this, yes, there are moments where he’s justifiably frustrated but he’s a sweet and positive person, and he listens to his therapist for the most part. That was believable too, because even the best patients don’t always tell you everything, don’t always listen to everything either. They don’t necessarily want to hear some possibilities or utter personal feelings to someone else. Giving voice to certain words or events out loud make them frightening.

I guess I went into this book thinking more about the healing of Seth, and while he is the one who’s physically healing, both Seth and Vargas have to heal emotionally. Vargas can worry enough for everyone, it’s  something he’s been dealing with daily. Trying to control situations so people can be protected, which is explored further as the book progresses. That he sees the Haven as something dark now when he has always loved his club is an issue he has to deal with as well. The Haven is the catalyst and setting for this series so I was cheering for that to be sorted out.

Because there was no denying his part in what happened to Seth and the others. It had been his club—a membership-only club at that—where they’d been targeted by that demented son of a bitch.

Henderson was killed at the end of the last book and Prescott is now imprisoned for his crimes, but Prescott is  suddenly appealing his sentence. He claims that the accusations against him were false. That the six young men went with him voluntarily and everything was consensual, including the cages he held them in. Someone is bankrolling a prominent attorney to support Prescott’s case, and Vargas is worried about the effect this will have on Seth and the others. In the original court case Prescott said he was coming for Seth and it’s a worry that he actually may be able to. Vargas also wants to know who is supporting Prescott and why – this fuels the suspense thread of the book.

Both Vargas and Seth get a POV, which moves the story along nicely. Prescott also gets a POV, and he is sufficiently creepy, and there’s one more which remains a mystery until the latter stages of the book. Although I didn’t love them as such, the extra two viewpoints added to the suspense element of the book.

Vargas and Seth. I loved them.

I dislike conflict that can be sorted through simple communication. So I was happy to see how Vargas and Seth talked like grown ups, even if there was fear or someone was unsure. I admired and respected how they worked through situations together as Seth healed from his ordeal. That Vargas diligently learned all he could to help.

The love story that unfolds is incredibly heartfelt. I was so happy reading about Vargas and Seth. They were perfect 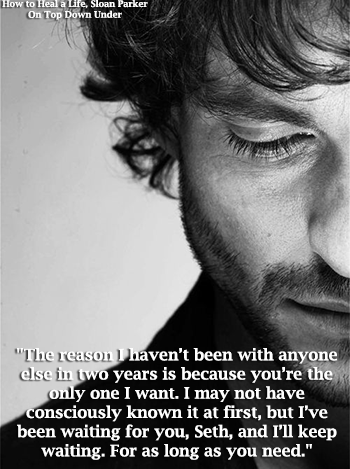 for one another. There was no room to believe they were merely thrown together, that maybe they mistook comfort or circumstances for love. While both men had their reservations, their love was never left in doubt. Depth and layers were so well written by Ms Parker that you could feel the emotional connection, it was so palpable to the reader.

There is believability to the time frame of intimacy, it was well paced and thoughtfully written. I appreciated how sex was not jumped into. While there was a build through kisses and sensuality, it takes a while to get to more sexually active moments. The first time they want to make love, Seth experiences back pain and has to take medication and lie down. They responsibly put it on hold. Penis was never used as a panacea.

The therapy is well written. Seth has his therapist, Dr Arteaga, throughout the entire book. He has PTSD related agoraphobia to overcome, as well as generalised anxiety, nightmares, pain, and some moments of worry and anger at the struggles he faces. Maybe he’ll never be the same again, which is understandably confronting when someone is the survivor or a crime, and so young. So needing a counsellor was paramount to his success and real. Vargas has his own realisations also.

The overall quality of the writing is strong, there were plenty of quotes I could have used.

Charlie, Seth’s dog, provided some extra gentleness to the book, and I do love a dog.

Vargas loved on the dog for a minute, Charlie eating up the attention, his tail thumping repeatedly against the floor. He was always so dang excited to see Vargas. Seth could relate.

How to Heal a Life is the next story along in the Haven series, which is like a spin off from More. The Haven is the club where Richard, Luke and Matthew met. Walter and Kevin, How to Save a Life, also owe their connection to the gay members-only club. Like Walter and Kevin, there is a substantial age gap between Vargas and Seth, Vargas is forty three to Seth’s twenty three. Unlike Walter, Vargas has no worries regarding the age difference. You don’t have to have read any of the other books I’ve mentioned, this can be read as a standalone, but I recommend them because More is one of my favourite books and the excellent How to Save a Life is book #1 and gives extra background.

How to Heal a Life took a little longer than I think the author would have liked to arrive but it was well worth the wait, quality writing always is. I’m so glad I got to spend time with Vargas and Seth. If you like emotion without drama, some suspense and a beautiful love story, one that encompasses patience, strength, support, kindness, and hope, a story with some suspense, a dog –  Charlie the Labrador – wonderfully engaging MCs, and a happy ending, then I highly recommend How to Heal a Life. 5 Stars!

You and I don’t often read the same books or even the same authors but Sloan Parker is one that we definitely agree on. More was my first full-length book in the genre and I’ve been a huge fan ever since. I can’t tell you how many times I’ve reread it over the years. I’ve been looking so forward to How to Heal a Life. How to Save a Life will always be one of my favorites. I just want to hug Seth and I know I’ll be an emotional mess before I’m done reading his and Vargas’ story. I… Read more »

It’s true, even though we don’t often read the same authors (pretty much never) we both read and enjoy Sloan Parker – which says a lot about how good a writer she is, with a broad appeal. You have to read How to Heal a Life because it’s so good and then we can discuss it 🙂 Definitely a big congrats to Sloan in following up a good book in the series – How to Save a Life – with another cracker in How to Heal a Life. I’m currently re-reading More as I’m in the mood for the whole… Read more »