.
.
.
.
.
Welcome to the Riptide Publishing/Aleksandr Voinov/L. A. Witt blog tour for our thriller, Hostile Ground! Every comment on this blog tour enters you in a drawing for a choice of two eBooks off our backlists (excluding Hostile Ground) and a $10 Riptide Publishing store credit.
Entries close at midnight, Eastern time, on May 17th, and winners will be announced on May 19th.  Contest is NOT restricted to U.S. entries. 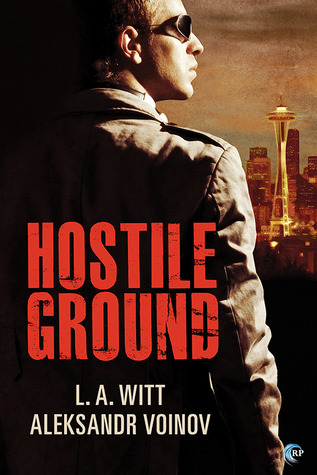 About Hostile Ground: Enemy territory is a dangerous place to fall in love.After the deaths of three undercover cops investigating a drug ring in a seedy strip club in Seattle, Detective Mahir Hussain has been sent to finish the job. He joins the club’s security team in the hopes of finding enough evidence to bust the operation before the men in charge find a reason to put him in a shallow grave.To protect the strippers, only gay men can work the club. Ridley, the cold and intimidating head of security, knows exactly how to test potential new hires—including Mahir. From the minute they meet, Mahir and Ridley engage in a dangerous dance of sex and mind games. Mahir needs to find his evidence before Ridley figures out he’s a cop—and before they both grow too close to betray one another.As the game goes on, Mahir burrows deeper into the operation, where he learns there’s much more happening than meets the eye . . . and why every cop who made it this far has been silenced with a bullet.
Hostile Ground is available May 12th from Riptide Publishing.
.

A dirty excerpt from Hostile Ground…

Ridley finally released most of the security staff but kept Mahir back. They checked the club for anybody left behind, hiding, or passed out, then closed up. Mahir was dead tired, though a nervous current ran through his gut when Ridley waved him to a car. He got in, gave Ridley the address of his crash pad, and directed him there.

Ridley parked down the street, then followed Mahir to his door, up the stairs, and through the next door. He looked around briefly.

Mahir shrugged his jacket off. “I’d offer you a drink, but I don’t have any.”

Mahir swallowed. He was exhausted, but one whiff of Ridley’s light cologne woke him right the hell up. “Yeah. I’m wide-awake.”

Ridley grinned. “I should hope so.” He pulled Mahir to him and kissed him. Not as aggressively as he had last night, but he certainly wasn’t passive, either. He assumed complete access to Mahir’s mouth, and Mahir let him because he’d been dying for this all damned day.

Mahir wrapped his arms around Ridley. There was no desk to hold them up this time, so he had to rely on their legs to keep them from crumpling to the floor. And if they did, then they’d just fuck right here. He didn’t care.

Ridley released Mahir’s shirt and slowly wrapped his arms around him, too. Mahir’s arm grazed Ridley’s shoulder holster, and the thrill that rushed through him made him unbearably hard. Yes, Ridley was fucking dangerous, but for tonight, he was Mahir’s. Or Mahir was his. One of the two. Mahir would take it either way.

Ridley broke the kiss. A few strands of dark hair slipped out of place and fell down over his eyes, giving him a slightly disheveled and incredibly primal look. He licked his lips. “Where’s your bed?”

Mahir couldn’t remember how to speak so he slipped a hand into Ridley’s and led him across the living room and into his bedroom.

“Clothes.” Ridley halted and freed his hand. “Off.”

Mahir faced him. Ridley unhooked his sunglasses from his collar and dropped them onto the secondhand dresser beside the door. Then he went for the first open button of his own shirt.

“Clothes off,” he ordered again and freed the button with a little excessive force.

Mahir didn’t have to be told a third time. He stripped, aware of Ridley’s constant scrutiny with every motion. And the more Ridley removed, the less Mahir could concentrate on simple tasks like unzipping his pants or pushing them over his hips.

The man was insanely sexy. Just as Mahir had suspected, the rest of his body matched those toned forearms. His abs were lean and ridged, and the harsh overhead light threw shadows that played on all the grooves and contours every time Ridley moved. He had a tattoo on his rib cage, right beneath where that shoulder holster had been. Mahir couldn’t make out the details from here, only the presence of sharp black lines and a few hints of color.

He’d already seen Ridley’s impressive dick, but it seemed even bigger against the backdrop of such a smooth, powerful body. Those legs were absolutely made for fucking. All muscle. Built to thrust hard enough to make a grown man cry.

And that was when Mahir realized he’d been staring. He cleared his throat and looked away. “I do. Yes.”

“So do I.” Ridley once again closed the distance between them. “I’m especially looking forward to seeing how you look from behind.”

Click here for Kazza’s spoiler free review
.
.
About the authors:

Aleksandr Voinov has been published for twenty years, both in print and ebook. He has ten years’ experience as a writing coach, book doctor, and writing teacher, and until recently worked as an editor in financial services.

After co-authoring the M/M military cult classic Special Forces, Aleksandr embarked on a quest to write gritty, edgy, sometimes literary M/M and gay fiction (much of which is romance/erotica)—the only way he can use his American Literature degree these days.

He’s been published with Heyne/Random House, Carina Press, Samhain Publishing, and others, and is an EPIC Awards winner and a Lambda Awards finalist.

L.A. Witt is an abnormal M/M romance writer currently living in the glamorous and ultra-futuristic metropolis of Omaha, Nebraska, with her husband, two cats, and a disembodied penguin brain that communicates with her telepathically. In addition to writing smut and disturbing the locals, L.A. is said to be working with the US government to perfect a genetic modification that will allow humans to survive indefinitely on Corn Pops and beef jerky. This is all a cover, though, as her primary leisure activity is hunting down her arch nemesis, erotica author Lauren Gallagher, who is also said to be lurking somewhere in Omaha.

L. A.’s backlist is available on her website, and updates (as well as random thoughts and the odd snarky comment) can be found on her blog or on Twitter (@GallagherWitt).

Yeah, that’s a good excerpt! 😉 On the list guys. Thanks.

I teally want to read this book a real lot. I loved the extract plus I read your review Kazza. 🙂

Thanks, Jana. It is nice to get a scene or two, isn’t it? Definitely read it. They write good books.

I have been eager to read this since I read Kazza’s review. I’ve enjoyed the work of both authors in the past and can’t wait to jump into Hostile Ground.

Love the excerpt. This book sounds awesome. Cheers for the Giveaway.

It is an awesome book

Don’t forget the Rafflecopter if you are interested in the giveaway on offer by Riptide.

Thanks for hosting us! 🙂