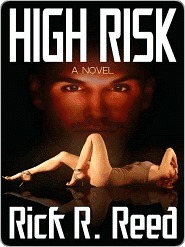 Beth Walsh seems like such a demure housewife. Taking care of her attorney husband and doing volunteer work, the young woman is someone you’d meet at a church social. But Beth has a secret life. While her husband works, Beth slides into what she calls her “slut clothes” and goes on the prowl. She becomes a completely different woman, wanton and uninhibited, with dozens of handsome strangers. Until she meets the one blindingly gorgeous stranger who will make her more than sorry for her secrets and lies. . .

Abbott Lowery is every woman’s dream: handsome, muscular, with intense blue eyes that contrast with his thick black hair. Women want him. Men want him. But Abbott is deeply damaged, and inside lurks a monster just waiting to be released. When Beth Walsh pursues him, it pushes a deeply-buried rage to the fore and he becomes determined to punish her.

Beth meeting Abbott lights the fuse on a bomb. Its explosion leads to a tale of terror and desperation so intense it will sear everyone who knows them. High Risk is a story of secrets, tainted histories, murder, kidnapping, and an ending so brutal and shocking readers will be left breathless.

Beth Walsh has it all. She has the perfect husband. She volunteers at a children’s hospital. She comes across as someone who (as the blurb states) looks like someone you’d meet at a church social. She wears conservative clothing and the world sees Beth as being a good girl, so to speak. Married to Mark for four years, she has the perfect marriage. Mark is a family attorney and works a lot, but he makes up for his time away by spending time doting on his loving wife. Their sex life is amazing and has not gotten stale. By all rights, the marriage is perfect and Beth and Mark have the perfect life together.

Only Beth has a secret life and there’s nothing conservative about it.

When Mark leaves for the office, Beth dresses in her “slut clothes” that she has hidden away from her husband. Short skirts, tight tops, high heels and a lot of make-up and jewelry. Once this Beth persona comes out, she goes out to play. She wants sex and she wants it down and dirty with strangers. No names. No personal details. Just hard, rough sex. Once she gets her kicks, she returns home and changes back into the perfect, demure wife for Mark. On one such morning after Mark leaves for the office, she makes her way to her hunting ground and spots a man so gorgeous she knows she will have him inside her before the day is over.  Tall, black hair, blue eyes – the man is perfection. Beth makes her move but the stranger isn’t interested. If anything, he’s angry that she dared come on to him. But Beth won’t be denied. She rubs against him and keeps pushing until finally he agrees to the hook-up with the condition it be done at her house. Beth has never brought one of her men to the home she shares with her husband. That’s hers and Mark’s place. How can she sully it by bringing in one of her random fucks? But she really wants this stranger and agrees. Once there, things don’t go remotely as planned for Beth. She thinks she’ll have this gorgeous man in her bed but he has other plans.

There was seldom any talk, other than an admonition, or encouragement. It was always a race to see who could get undressed first. And that’s the way Beth liked it. No time for thinking. No time for guilt. Just raw lust. If you talked to them, they became people.

This begins a horrific story for not only Beth but her husband as well. The stranger, who isn’t a stranger to the readers for long, hates women like Beth. To him, they are whores, sluts, and deserve any bad thing that happens to them in their miserable lives. What starts as a bit of stalking on his part quickly turns violent. Mark, who had never suspected his wife of infidelity, is suddenly doubting not just her but their entire marriage. The stranger makes him doubt. There are phone calls, him showing up at random places where Beth and Mark are, letters are sent. Then it turns into a whole lot more. Beth’s mistake of insisting on having this man begins a journey so horrific for her and for the ones she loves that some might not survive.

I have to state that Beth Walsh is not a likable person. I kept hoping I’d feel some sympathy for her at some point during the book but none came. There are times when she deserves sympathy, as she’s brought into something so horrible that the reader can’t help but cringe and be nervous about turning the page to see what happens next. But I have to say I felt none, regardless of what she was going through or had gone through in the past (her back story is brought out a little and it’s not pretty). She brought everything on herself and those she loved. Her secret life, for her merely to get her kicks, brought so much heartache and drama to those around her, that the entire time I was reading this I was thinking “All of this is your fault. Had you stayed faithful to your amazing husband, none of this would have happened.” And that’s true. Every bad thing that happened in this book was strictly as a result of a selfish woman who cared more about her own “needs” (I use that word lightly) than the people she loves. Did that take away from the story for me? Absolutely not.

Then there is the stranger, whose name (listed in the blurb) is Abbott Lowery. Abbott has his own story to tell and it’s a sad one. Oh, don’t get me wrong, the things he does to Beth (and others) are not excusable but I’m the type of reader who wants to know why a bad guy is the way he is. While I had no sympathy for him as an adult, I felt bad for what made him the man who would do such horrific things. Had something so horrible not happened to him as a child, would he have turned out to be the kidnapping murderer that he turned out to be? Probably not. His back story is told little by little throughout the book and then it comes out completely later. The angry and bitter man who hates women – and men – wasn’t born that way. He was made to be that way by the actions of others when he was a small boy. Who wouldn’t be damaged after that?

I adored Mark from the onset, though I kept hoping he would speak up a bit more. Sometimes, it seems, it’s better to ignore things than take a chance of your suspicions being true. This was Mark. I read other reviews that called him gullible and naive. I didn’t see him that way at all. I saw him as a man who loved his wife totally and unconditionally and was not willing to face the fact that she was not the person he believed her to be. If you ignore it, it can’t be true. That’s what I saw with Mark.

This book won’t be an easy read for some. The violence is very graphic and there are situations that might disturb some readers. Personally, I don’t believe it could have been written any other way. High Risk will bring out various emotions for the reader – anger, sadness, fear. You will question how someone who has such a perfect life can be so selfish. You might even feel sad for the bad guy, as I did more than once in this story. I’m not sure what that says about me but I kept thinking how Abbott Lowery would have been a totally different person had he not been subjected to something so horrible when he was a small child.

This, with the exception of Mark and Beth’s relationship, is not a love story, though there was a hint or two thrown out there by the author in regards to another character. One of the things I love most about Rick R. Reed’s books is the fact that you are sometimes left to wonder how certain things will play out. It doesn’t always have to be spelled out in black and white for the reader.

The resolution to this story was expected and I was left satisfied with the ending. It could have gone another way and I would have been pleased with that as well. Either scenario would work perfectly with the story.

The violence, as noted above, is on-page and at times graphic. Don’t go into this expecting it to be off-page. If you’ve ever read any of the author’s other horror/thriller books, you know what to expect. If not, keep the warning in mind before reading this book.

Overall, this is another great thriller by Rick R. Reed. It’s fairly common knowledge that my love of his work came to be as a result of his horror, long before I started reading his romance. High Risk did not disappoint. It’s fast-paced and will leave the reader thinking about the choices they make. Are you really only hurting yourself? Or are you putting others in a position of being hurt as well? Beth Walsh discovered the answers to those questions the hard way.

Whoa, Cindi. It sounds dark and right up your alley. Tall dark black hair ad blue eyes? Hmm, we might be in trouble 🙂

Rick R Reed needs to write some more of these horror books, I’m thinking, as all of the ones you have read/reviewed sound fantastic.

Every one that I’ve read has been fantastic. I love his romance, but you know that dark books are my first love. 😉

It was that black hair and blue eyes that got Beth and others in so much trouble. He was so hot she HAD to have him and that, unfortunately, opened the door to the other stuff.