Hi! We’re Lisa Henry and Heidi Belleau, authors of Bliss. We’re touring the web talking about our influences, our writing process, giving you a behind-the-scenes look at our book, and even a sneak peek or two! And what would a blog tour be without a contest? We’re giving away a copy of the first novel we wrote together: King of Dublin!

Here’s today’s look at the “utopian” world of Bliss, and the behaviour-modification chips they use to control their convicted criminals:

What if you could alter your mind? Not through therapy or psychiatry or prescription drugs, but using sophisticated new technology that works immediately and requires no effort on your part? Would you do it?

In the world of Bliss, this isn’t a theoretical question, it’s an actual choice.

Except when it isn’t.

In crime-ridden Tophet, full of flawed people, mind chips are used for legitimate and criminal ends: to help people get over bad habits or overcome fears or even fix mental illnesses . . . or to override morals or sense of self. In perfect utopia Beulah, its perfect citizens don’t need any such modifications. There, the chips are put to different use: to aid in the rehabilitation of criminals by suppressing violent impulses.

Or so they say. Because once somebody’s given the power to tinker with your mind, what’s stopping them from making a few unauthorized tweaks?

So knowing the benefits and the risks, would you opt for a mind-altering brain chip?

Thanks for following our tour! To celebrate our release, we’re giving away a copy of our first joint release — King of Dublin. All you have to do is leave a comment on this post with a way for us to contact you, be it your email, your twitter, or a link to your facebook or goodreads account. Please put your email in the body of the comment, not just in email section of the comment form, because we won’t be able to see it otherwise! On September 1, we’ll draw a winner from all eligible comments! Be sure to follow the whole tour, because the more comments you leave, the more chances you have to win the prize! 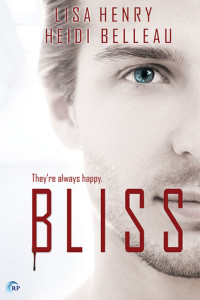 Rory James has worked hard all his life to become a citizen of the idyllic city-state of Beulah. Like every other kid born in the neighboring country of Tophet, he’s heard the stories: No crime or pollution. A house and food for everyone. It’s perfect, and Rory is finally getting a piece of it.

So is Tate Patterson. He’s from Tophet, too, but he’s not a legal immigrant; he snuck in as a thief. A city without crime seems like an easy score, until he crashes into Rory during a getaway and is arrested for assaulting a citizen. Instead of jail, Tate is enrolled in Beulah’s Rehabilitation through Restitution program. By living with and serving his victim for seven years, Tate will learn the human face of his crimes.

If it seems too good to be true, that’s because it is. Tate is fitted with a behavior-modifying chip that leaves him unable to disobey orders—any orders, no matter how dehumanizing. Worse, the chip prevents him from telling Rory, the one man in all of Beulah who might care about him, the truth: in a country without prisons, Tate is locked inside his own mind.

You can read an excerpt and purchase Bliss here.

Lisa Henry lives in tropical North Queensland, Australia. She doesn’t know why, because she hates the heat, but suspects she’s too lazy to move. She spends half her time slaving away as a government minion, and the other half plotting her escape.

She attended university at sixteen, not because she was a child prodigy or anything, but because of a mix-up between international school systems early in life. She studied History and English, neither of them very thoroughly.

She shares her house with too many cats, a dog, a green tree frog that swims in the toilet, and as many possums as can break in every night. This is not how she imagined life as a grown-up.

Heidi Belleau was born and raised in small town New Brunswick, Canada. She now lives in the rugged oil-patch frontier of Northern BC with her husband, an Irish ex-pat whose long work hours in the trades leave her plenty of quiet time to write.

Her writing reflects everything she loves: diverse casts of characters, a sense of history and place, equal parts witty and filthy dialogue, the occasional mythological twist, and most of all, love—in all its weird and wonderful forms.

When not writing, you might catch her trying to explain British television to her daughter or sipping a drink at her favourite coffee shop.

Chat with her on Twitter using the handle @HeidiBelleau.

Check out her books on Goodreads.

Great giveaway, guys. I’ve read both of these authors and am a big fan.

This sounds like a fascinating book, and I can’t wait to read it. Please count me in. =}

Awesome giveaway! This sounds like a book I would really enjoy.

P.S. It made me snicker just a bit that email is now considered the “old fashioned way!”

Sounds like a great book. Thanks for the giveaway!

Love your work. Getting myself emotionally prepared for this one. I know it’s going to be a killer.

this sounds really interesting! please count me in

thanks for the giveaway

I have enjoyed both author’s other books and I have wanted to read King of Dublin for a while now! aahickmanathotmaildotcom

Thanks to everyone who’s left a comment so far. You’re all in the draw, and good luck! 🙂