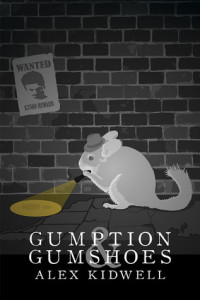 August (Auggie) Mendez is all about detective novels and movies. He has a boring desk job that’s getting him nowhere. He’s overweight, kind of plain and he has no real goals other than making it through another bad day at the office and spending time alone in his apartment watching his movies or reading his novels.

I often wondered if the reason I’d never gotten the Super Spy Kit for Christmas when I was eight was because Mr. Olson (his boss) had eaten Santa. If the jolly guy came with a side of ranch, I was probably sure he would.

Auggie’s self-esteem is low because of his weight but he does nothing to change his appearance.  Auggie also has a secret. He and his family are shifters, chinchilla shifters (which I have to say was a new one for me and I’ve read a lot of shifter books). Not only does his weight keep Auggie from feeling like he can get close to anyone, but his secret is one he knows he’ll never be able to trust anyone with.  When his grandfather passes away and leaves Auggie a small inheritance, he decides to make some changes. Out with the job he hates and on to following his dream of becoming a private detective, just like his favorites from his books and movies.

Sam Ewing is divorced and bitter as a result. His marriage to Kyle had lasted a long time but ended very badly. He’s not willing to take a chance on getting hurt again so he’s stayed away from any type of relationship in the years since his marriage ended. He owns a building where he rents to small businesses. He has a converted apartment there so he’s always close by. Sam would never be called a people person. He’s grumpy and doesn’t go out of his way to be friendly with anyone. Then he meets one of his new tenants, August Mendez, and everything changes. Grumpy Sam has finally gotten the hots for someone.

Sam was a sucker for brown eyes, and he’d been cute in a roly-poly kind of way. Aw, hell, in any way, although Sam was trying real hard not to think about it.

Auggie too has noticed Sam but he feels he’s not good enough for him.  Why would that gorgeous man (with “washboard abs”) want someone frumpy like Auggie?

Sam probably worked out and lifted things and he was older—not gross older, but like George-Clooney-hot-older—and I was intimidated. Because I had a spot on my shirt that was either from tacos last night or ramen noodles the night before. Because I was overweight and wore stupid hats in no way ironically.

For a moment I had an incredibly stupid urge to go down there. What would I even say? “Hi, I’m back to spaz all over you some more, hope you weren’t busy being gorgeous and normal.” Yeah, pass.

One of Auggie’s cases quickly gets dangerous and he must shift to get out of the situation. Sam is there as his rescuer and Auggie’s secret is out. (How did you explain your ability to turn into a small, chubby little rodent to the average person?)   This begins a cute story of two men, one stubborn as hell and the other having self-esteem issues, coming together in a relationship as well as finishing the case that Auggie is working on…. together.

Auggie has been hired to find out who is stealing from a dry cleaner across the street from his office building. What appears as simple case turns out to be anything but. With Sam’s help and some major sex thrown in along the way, Auggie and Sam work together to bring down the thief. There is a bit of danger and a tad of violence but in the end, the bad guy is caught and all of Auggie’s body image issues disappear as he has finally found the one man who thinks he’s gorgeous on the inside and out. Sam starts off as a cold, grumpy older man (he’s 46 to Auggie’s 30) but he slowly begins to thaw thanks to Auggie.

I really enjoyed this book. There is humor, a bit of violence and super hot sex. Sam and Auggie, as different as night and day, are perfect together. Sam believes that Auggie is the sexiest man in the world. He’s also his protector and will do anything to keep the man he loves safe. Auggie is klutzy and shy and tends to ramble when he’s around Sam but in the end? They both come together nicely and make the perfect couple.  Auggie in Chinca form is a blast.

I’ve read everything this author has written to date and I have to say that Alex Kidwell simply cannot write a bad book. I will eagerly be anticipating the next release.

This sounds like a fun book. Something well written and nice all in one. Terrific review, Cindi 🙂

Thanks! It really was a fun book. 😀

This sounds sooo cute – and I feel like I need cute at the moment – shall add it to my list – thank you!

I have no doubt you’ll enjoy it, Anne. It’s really cute. 😀