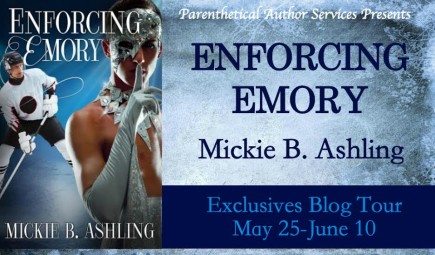 Hi Cindi and Kazza! Thank you for hosting my blog tour visit. Enforcing Emory is a contemporary m/m romance set in the world of Olympic figure skating and ice hockey. It’s a brand new universe so there’s no need to catch up on anything. I’ve brought you an excerpt and some goodies to share. Enjoy!

“You want to see my short program?” Emory asked, hoping Nik would say yes. It wasn’t a question of showing off as much as a need to please, like some overeager puppy who couldn’t wait to show his owner every trick he’d learned.

“Is a quad part of the routine?”

“Do you mind if I listen to the music on my phone?”

Emory pulled his iPhone out of his pocket and handed it to Nik. He pushed the sound up to its loudest setting, found the music he needed, and hit Play. The melody wouldn’t carry while he was on the other end of the rink, but every time he passed Nik standing on the sideline, he’d pick up the tune. It was better than nothing and helped his focus.

As the strain of violins seeped through the tiny speaker, Emory put all thoughts of Nik aside and slipped into the role of Romeo. The classical piece wasn’t his choice, but he’d been talked into something more conservative by his coach, who was sick of hearing the words “flamboyant” and “outrageous” attached to her protégée’s name. People overlooked Emory’s extraordinary talent the moment he appeared on the ice in one of his colorful costumes and dramatic makeup. Critics had urged him to tone it down and put his gayness on hold while competing, but Emory had ignored them in the past. This time, however, he’d given in to Jane’s request because he was going to the Olympics and he wanted to prove a point.

The routine was precisely two minutes and fifty seconds long. Not one second over or under or he’d be penalized. There were seven required elements that had to be inserted into the choreography: a double or triple axel, a triple or quadruple jump immediately preceded by connecting steps, a jump combination, a flying spin, a camel or sit spin, a spin combination, and finally a one-step sequence in either a straight, circular, or serpentine line.

Emory had practiced this program a zillion times, it seemed, before he’d performed at Nationals a few days ago. His body was on autopilot, trained to move seamlessly from one complicated move to the next, hardly aware that it was happening. The quad was the most difficult jump, but his intricate footwork was just as important. Few skaters could combine the technical with the artistic, but Emory was naturally graceful and had spent many hours in the ballet studio making sure this part of his training wasn’t neglected. It was another reason why his coach had chosen Prokofiev. He was going to Russia, and their standards were exacting when it came to ice skating, but they considered ballet to be their own creation—even if it wasn’t so—and anyone who had eyes could see that Emory’s moves were flawless.

He’d competed in front of a live audience since he was six years old and was immune to the facial expressions of the people in the stands. His parents and other family members always watched him with pride, the judges looked for mistakes and observed his every move with keen interest, and fellow skaters were either envious or derisive, but the look of yearning on Nik’s face was a first. When he slid to a stop and approached the hockey player, the cool blue eyes were filled with emotion. Emory was taken aback.

Olympic figure skater Emory Lowe falls in lust the moment he lays eyes on his new neighbor, hockey player Nikolai (Nik) Vetrov. On the surface, Nik is a typical badass enforcer, intimidating and dangerous, on and off the ice. The only son of Ukrainian immigrants, Nik has been groomed from childhood to fulfill his father’s dreams of seeing him in the Hockey Hall of Fame. Igor guides his son toward that goal with a controlling—and abusive—hand, steering him clear of anyone who might ruin his chances.

Although Emory is the US National Figure Skating champion, he’s in-your-face gay, and his audacious persona rubs Nik and his family the wrong way. Raised by supportive and loving parents, Emory is Nik’s polar opposite in every way but one—his desire to succeed. Underneath the fluff and glitter beats the heart of a fierce competitor, and this side of Emory’s personality begins to close the distance between the two athletes.

While the attraction was one-sided in the beginning, Nik finds himself responding to Emory’s flirting. Before the incongruous pair have a chance at any sort of relationship, they must survive the pressures of career, separation, and most importantly, Igor’s ruthless homophobia.

Mickie B. Ashling is the alter-ego of a multifaceted woman raised by a single mother who preferred reading over other forms of entertainment. She found a kindred spirit in her oldest child and encouraged her with a steady supply of dog-eared paperbacks. Romance was the preferred genre, and historical romances topped her favorites list.

By the time Mickie discovered her own talent for writing, real life had intruded, and the business of earning a living and raising four sons took priority. With the advent of e-publishing and the inevitable emptying nest, dreams were resurrected, and the storyteller was reborn.

Mickie loves to travel and has lived in the Philippines, Spain, and the Middle East but currently resides in a suburb outside Chicago.

Using Rafflecopter below, enter to win one of these prizes (contest open internationally): a $20 Dreamspinner gift certificate, one of five ecopies of Enforcing Emory, or an audio copy of Fire Horse. Must be 18 or older to enter.

May 25 – The Novel Approach

May 29 – On Top Down Under Book Reviews

June 9 – Sinfully…Addicted to All Male Romance

Every time I look at the cover I think how much I love the picture of the figure skater on there.

Nice excerpt after reading your review, Cindi – it always gets me going when I think how being gay is something to ‘tone down’ in artistic sports, or even dance, when you are more noticeably gay. Can I just say grrr!

I agree with you on how frustrating it is when people are told not to be themselves. Everyone should just accept people for who they are. Sadly, you know that’s not often the case.

A huge thank you to Mickie B. Ashling for stopping by On Top Down Under as part of the Enforcing Emory tour!

Thank you for giving me this opportunity to share a part of Nik and Emory with your readers.

I enjoyed the excerpt I loved the description of Emory’s skating it was so easy to picture it in my mindr mind just beautiful.

I am enjoying the excerpts on this tour and I love the book cover. Thanks also for the review (on a separate post).

I love the cover and the excerpts just keep getting better.

Loved the excerpt. Thank you so much for sharing. It’s been a while since Ive watched figure skating, but reading this, it started to come back to me.

Another great excerpt. I love watching figure skating. It is one of the highlights when I watch the Olympics. Love this tour.

Great excerpt. Thank you for sharing it. It’ll be fun to read these two butting heads and more.

Congratulations on the new release! Looking forward to reading it!

I loved this excerpt! “the look of yearning on Nik’s face was a first. When he slid to a stop and approached the hockey player, the cool blue eyes were filled with emotion. Emory was taken aback.” Powerful 🙂 Thanks for sharing, this book sounds amazing!

I love the Figure Skating vs Hockey plot! Adding it to my TBR… Thanks for the chance(s) to win a copy/a way to purchase a copy 😉