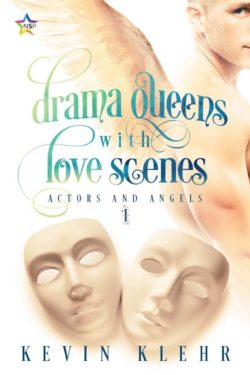 Close friends Allan and Warwick are dead. They’re not crazy about the idea so to help them deal with this dilemma are Samantha, a blond bombshell from the 1950s, and Guy, an insecure angel.

They are soon drawn into the world of theatre – Afterlife style, with all the bitchiness, back-stabbing and ego usually associated with the mortal world.

Allan also has a secret. He has a romantic crush on his friend, Warwick, but shortly after confiding in his new angel pal, his love interest falls for the cock-sure playwright, Pedro.

Not only does Allan have to win the heart of his companion, he also has to grapple with the faded memory of how he actually died.

Allan and Warwick are best friends, living together, even moving from Sydney to Port Macquarie for a sea change together. Now it seems they have moved onto the Afterlife together. But how? There’s a loss of memory between being on holiday at Allan’s 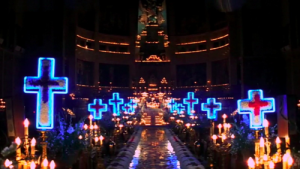 Uncle Bryant’s place in Melbourne, to being in a “post-normal life.”  Post-normal life consists of being in the Limelight Quarter – a kitsch theatre section of the Afterlife. A Jayne Mansfield look-a-like, Samantha, and a flightless angel, Guy, are their welcoming committee. The descriptions of the Limelight Quarter had me thinking of a cross between a Baz Luhrman production and Panem. It is all rather colourful and glitzy on the surface but you know something more is under the pizzazz. Apparently the two friends ended up where they are in the Afterlife because they’ve been aspiring thespians at one stage or other in their lives. Both end up in another play but this time it is a cheesy Afterlife production. A 1920’s (kind of) playwright, Pedro is the writer of this latest theatrical production being staged. 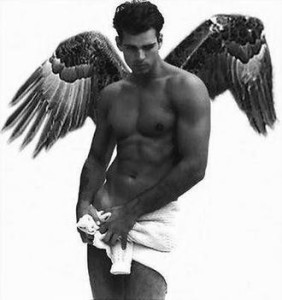 There is a cast of many – the MCs, the exasperating Pedro, who perplexingly wins Warwick’s affections, Samantha the head of the Limelight Sector, Maudi, the cheesy first play’s director, (loved Maudi) Wilma the theatre critic, Monique the fortune-teller, who literally holds the cards, and Guy, the gorgeous, joint-smoking, occasional er, cupid-esque, sweetheart of an angel, also Uncle Bryant and his culinary-compatible lover, Pamela.

Allan wants to know why he and Warwick are where they are, what happened to put them in the Afterlife to begin with, and who may be trying to get rid of him now he is there? Allan also has deeper feelings for Warwick but now that the (sometimes)jealous and OTT Pedro is in Warwick’s life, that looks like it has gone all pear-shaped for him as well. It is hard piecing things together before they ended up in the Limelight Quarter, bit by bit past memories seem to fade. And what’s with trying to bump someone off who is already post-normal?

The different plays the cast of characters are involved in, particularly Allen and Warwick, and the respective directors, are intertwined in the MC’s lives – whether that be post-normal or not. The book is off-beat and fun. The characters made me laugh or, well, shake my head.

The playwright shook his head, I looked at Warwick, wondering if they’d met. “Do you know…?”
“Yes, I’ve met Gloria’s son briefly through Samantha and Pedro.”
“So you don’t know his real name either?”
“Allen, don’t fish,” the nineteen-year-old said. “Just enjoy the mystery.”
I rolled my eyes.

Pedro, Warwick’s love interest, is the butt of many a joke by people in The Limelight 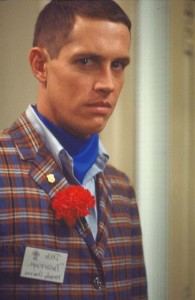 Quarter but he is such a sneaky Neidermeyer to me.

“Break a leg in the second act. Or at least break Pedro’s legs, then we can replace him with someone who can act.”

From the wings, Warwick blew me a kiss with the discretion of a nuclear bomb. Pedro was right behind him. I smirked at the no-talent-actor like a man in love, before finishing my speech.
Pedro attempted a look of death. Even in real life, he couldn’t motivate.

Maybe we were butchering Gloria’s son’s play, but at least stealing Warwick away from Mr. Teensy Dick was giving me a wicked sense of pleasure.

Ahhh, my son (he shall now be (re)named ‘Kazza’s son’) and I did revel in the Pedro-bitch-slapping 🙂

I can’t say a whole lot about the well named and equally well written Drama Queens With Love Scenes because it would be a spoiler and it is a book best enjoyed by the individual reader. There are also complexities in the story that lead into the next book that need to be left out.

There are a lot of cryptic clues and information in Drama Queens With Love Scenes. It IS all about the subtext, dahlings…and the bitchiness of cliques and the behind-the-scenes drama of a play but also, in reality, people’s lives. It’s also about second chances, humour, bittersweet moments, love, the MC’s lives now and…. not saying 🙂 I really had some fun reading this book, and while it is not regional, occasionally some of the turns of phrase are quite Australian and I laughed so hard – you tell him, love. While I took a little bit to settle into the characters, suddenly I found it clicked, it took off, and I was drawn right in. I had such a laugh at Maudi and her 19th century affair and its retelling in bits and pieces throughout. I know Maudis. Know them well. Guy the angel is gorgeous. Initially the characters do things that make you wonder why, I did. But as the plot unfolds you see exactly why. I shall be reading Drama Queens and Adult Themes over the next few weeks. I must see where this all goes.

“I know it’s unsettling, but a crisis here and there can help bring people together.” I rubbed my heavily grease painted chin. “It brings out the best in people and makes them appreciate what they’ve got.”

Review copy supplied by the author in return for an honest review.

I love Guy. That’s one of my all-time favorite angel pics. 😉

This looks so much like a “Cindi” book. I love stories with a bit of humor and I can tell I’d love this one.

Great review and I can just hear “Kazza’s son” as he revels in the Pedro slapping. 😀

I just saw this comment, Cindi. It is a gorgeous angel pic, isn’t it?

He was laughing with me at Pedro’s expense, and he will also lose his real name and be “Kazza’s son” from here on in 😀