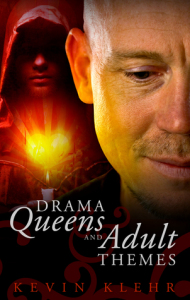 Adam’s about to discover how much drama a mid-life crisis can be. He’s obsessed with Mannix, the nude model in his art class. But Adam has been married to Wade for nearly two decades, and they don’t have an open relationship.

Little do they know that Fabien, a warlock from the Afterlife, has secretly cast a spell of lust on Adam and his potential toy-boy.

The blurb makes this book seem like it could be standard mm ménage material when nothing could be further from the truth. There is some sex in the book, it certainly looks at do we/don’t we take a third? but with meaning and purpose thrown in. When there is sex, it tends to be artistically written, but it really isn’t about that. It’s about finding yourself, soul mates, close friendships and learning about life and love. It’s also about judgement and what constitutes a loving relationship.

In this incarnation of life, Allen and Warwick are now Adam and Wade. They are in their forties and they’ve 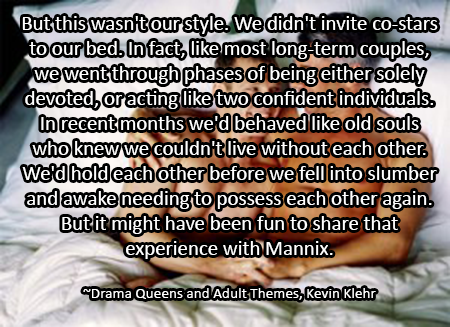 been a committed couple for eighteen years. They are happy, in love, and not looking for anyone else to add to spice up their life. However, Fabien, a warlock from the Afterlife, decides to have a bit of fun with the “boring” couple. He casts a spell of desire over Adam for a third party – a younger nude model in Adam’s art class, Mannix. Adam suddenly finds himself drawn to Mannix in ways he finds incomprehensible and uncomfortable at first, but he’s interested and finds himself talking about Mannix to Wade. A lot. Wade then finds himself intrigued by Adam’s talk and descriptions of/interest in Mannix, and that the infatuation seems mutual. Wade thinks Adam should bring Mannix over for dinner and they can both get to know him and see what happens. Why would such a committed partner think this way rather than be jealous? Well, there’s a bit more to it than the original spell. Farah, an Afterlife witch, adds desire to Wade to balance Fabien’s lustful spell on Adam. Then there is another Afterlifer – Ipan – who does not approve of Fabien’s spell to interfere in a monogamous couple’s life –

“Boring or not, there are ways you can add spice to his life without an affair.”
“Oh yes, like what?”
“He can feel young by doing something childlike. Flying a kite perhaps.”
“How very Mary Poppins of him.”

To top it off, Mannix, while desiring Adam at first, ends up desiring both men. His desire for the older men has its purpose. Reasons and meaning become apparent as the book progresses. 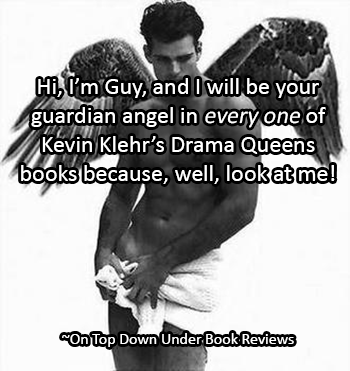 There are connections to some of the cast from book #1. Memories Adam has of ‘Mr. Guy.’ Adam remembers his ‘guardian fairy’ visiting him when he was around four. Guy would appear with Maudi and Frederick and make things right for Adam, particularly when his parents would fight. The time revisiting four year old Adam and Mr. Guy was, simply put, beautiful, and one of my favourite parts of this book. I already loved Guy from book #1 but he took stole my heart here. Young Adam calls Guy his guardian fairy but he’s really his guardian angel. Guy became close friends with Allen (now Adam ) in the first book when Allen was ‘post-normal’ and living in the Limelight Quarter of the Afterlife. Now Guy can’t stay away when he’s once again needed by Adam. Because, rules or not, that’s what friends do. That’s what he’s always done. How fantastic to know your guardian angel and to have him visit or take you back to the Afterlife when you need it. To revisit the always-interesting Pedestal bar. This time Guy has a partner, Joseph, and I didn’t approve. He’s not good enough for (my) Guy but he does add some colour to an already colourful cast.

The plot in this book is interwoven with book #1. There were several plays, including one written by Gloria’s son in the first one. Oh yes, we discover Gloria’s son’s name here, but you have to read the book. One of the plays is now here in this (current) life and also being played out at the Petersham Community Hall by a local theatre group. The play and life are imitating one another. This time Adam is a director of their production, last time he was an actor – both books are centred around the MCs relationship and plays/the theatre. Like Pedro in book #1, there’s a character who is the butt of observational humour in this book too. He of the lacking-talent-and-vacuous-behaviour with pills, Sooty on the side, and his sugar daddy, Sugar Daddy.

“So you’re either still drunk from last night, or you’ve had vodka in your Coco Pops.”
“When Sugar Daddy’s drunk, he’s loving. So I poured wine while he told me the reasons I should move out. We kissed and made up eventually.”
“I’m so relieved,” mumbled Maude.

“Maude, I know someone who can replace him,” I said quietly.
“Look, Shannon can act. We’ve seen it.”
“Yes, but Sugar Daddy and fairy pills are his interest now.”

There isn’t a lot I can say about the book without totally spoiling it, and the review is a already a semi-spoiler review, so I shall say no more about the plot. But what I will say is this, if you are looking for something a little different in the gay romance/LGBT genre, this book is that. It is speculative fiction of the fantastical variety with trips between life and the Afterlife, and it uses some magic realism to walk between the here and now and the past, with relevance to future occurrences. It is about recycling/recurring love with your soul mate(s).

Drama Queens With Adult Scenes is another well named and well written book by Kevin Klehr. Will it be for everyone who reads gay fiction/romance? Not really, but if you like intelligent writing, humour, a spec-fic/fantasy style story that is also contemporary, this is a terrific read. It is sweet, witty, clever, and not without bittersweet moments as well. I liked this book just that bit more than Drama Queens With Love Scenes, and I liked that a whole lot. I felt Kevin Klehr had really settled into his muses. The characters of Adam and Wade were true to the original Allen and Warwick, albeit older this time. Guy was even more wonderful, and I re-adored Maudi/Maude. I like how Kevin Klehr writes gay men. They are men I know and relate to from my own life. They are quite real and that is the style and intention of the book. DQaAT is a hard book to do justice to in a review. It’s the sort of book that makes it difficult to use quotes effectively, they lose something in translation from book to review because you just kind of have to ‘be there’ to get the true context. I hope there is more coming in this series as I want to revisit these characters… and I would love to see more Guy. 4.5 Stars!

I am totally in love with Guy. I think I’ve said that a few dozen times. 🙂 My favorite angel pic.

With that being said, this looks like a great continuation of the series. I can tell I’d be all over these books. Great review. Love the pics and quotes.

Outside of our angel avatar, this is my favourite angel pic as well. He is now known as Guy and we’ve officially adopted him 🙂

The books are good reading, Cindi.