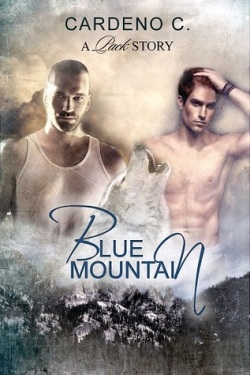 Mitch Grant is a twin and by default an Alpha of the Blue Mountain shifter pack. His brother, Frederick, 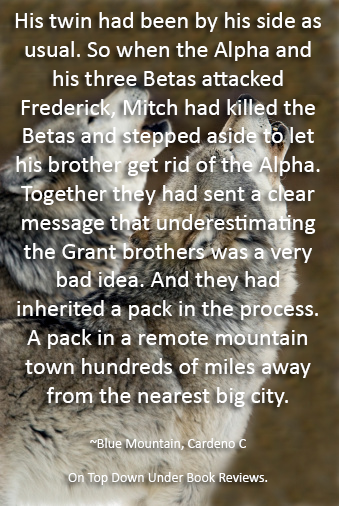 has the right skillset to be the actual Alpha-by-title of the pack after they killed the previous cruel Alpha, Kristof. Frederick has a mate, Donia. Mitch is glad for him but he’d like a mate of his own if Mother Nature would bless him with one.

Mitch is a man-mountain at 6’7″ and he’s also broad as a beam. Between Frederick and Mitch they have the whole thing down – Frederick more the charismatic politician, Mitch the primary muscle. Mitch lives on his own in a cabin on the pack periphery, always on guard. He also has his own business and living in remote Blue Mountain wasn’t exactly his first choice, but Frederick and Donia love it there and it was Donia’s pack, so he stays.

The book starts with some of the pack coming back with blood on them letting Frederick and Mitch know that a strange shifter is on pack territory without permission. That he is also a male Omega who they have left for the Alpha to take care of. Both Frederick and Mitch immediately know the smell is Mitch’s mate. Mitch finds the Omega, knows he is his, and takes the hungry and small shifter back to his cabin. The problem for Mitch is, this Omega is feisty and has not been used to pack. He also doesn’t believe in a good shifter pack or this whole mates/mine thing.

So Mitch takes the Omega to his cabin. He is a bit Neanderthal at first, tying the Omega up, but after a short period he soon strikes an agreement that he won’t do anything untoward or touch the Omega. He’ll let his words guide him to learn all that he can about his mate. Mitch just wants him to stay for a month so they can get to know one another and he can see for himself that they are fated to be. That their pack is a good place to be for a wolf shifter.  He also wants to protect him.

“So, what? You want to shield me from the big bad dangerous world in exchange for drawing my blood and…and…” Simon swallowed hard. “And fucking me?” He shook his head. “No thanks. I’ll take my chances out there. At least then I’ll have the possibility of staying safe.”

It takes a while for Simon to even divulge his name, he is incredibly mistrustful of anyone, in particular  shifters and Alphas. Simon came back to Blue Mountain to bury his mother after they both had a hard life on the road as lone wolves and his mum dies. Simon is a true Omega nurturer but he has been worried for so long he is worn down. Mitch is romantic and soft under his big, strong, tough exterior.

Blue Mountain is a slow burn for Mitch and Simon. Mitch knows Simon is his mate but Simon takes time to 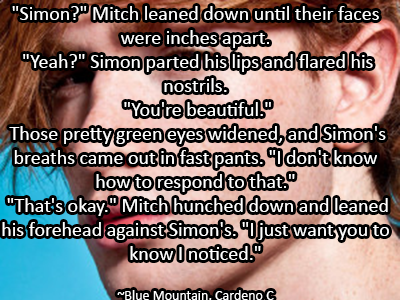 come to that conclusion. Mitch is all about pack, but a mate first. He is amazed that two Omegas, two shifters, have survived without pack for so long. Simon doesn’t realise that he can be gay within the pack, his father made sure it was looked down on before getting rid of both him and his mother. Others have treated him badly and reinforced it, telling him his smell is off, that they can effectively smell gay on him. That a male Omega is a curse –

The idea that he could have a mate when he didn’t even have a pack amazed him. For that mate to be male was impossible. So impossible that it couldn’t be true. It was a trick.

Once they do have a meeting of the minds the I love yous flow and the sex is romantic and more intimate. Mitch is patient and Simon is kind but understandably nervous.  I have to say that given the way some of the pack treated him on the first night, and their attitude, Simon had some just cause to be mistrustful. I would have been too.

I am more of an edgy, dark paranormal reader, but Cardeno C gave me something 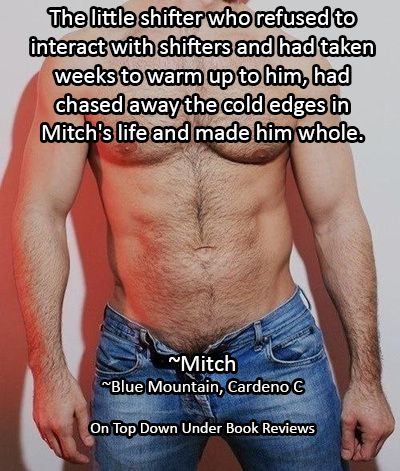 sweet to lick here with the promise of a nice new series. If you like your gay (paranormal) romance sweeter, with that almost… innocent-sexy vibe mixed in, this is a beaut novella. I thought Mitch and Simon were a great pair – Alpha and Omega, protector and nurturer, and that is exactly how they fit together. Cardeno C is very good at matching  leading guys, making them work just a little along the way for what they both need. Blue Mountain delivers nice romantic shifter reading. 4 Stars!

I saw Mitch’s height and thought “Oh yeah… my kind of character.” 😉 You know me and tall guys. *grin*

This looks like a nice paranormal. Great review. As always, I love the quotes and pics.

Oh, yes. I know about you and your tall men, lol.

I see 6’7″ and think of my brothers, because they are that tall. Now that sounds weird doesn’t it… hmmm. You know what I mean 🙂

I love Cardeno C, and yeah some of us like a little sweet to our edgy romance.
The pack sounds like a challenging place to be. I do like the sound of Mitch and his masculine authority, but what I love about Cardeno C’ is his ability to show the soft and nurturing side to a dominant/alpha man. He reminds us that strong beautiful men can exist, they want to be loved and they have a capacity to give so much.
Great review Kazza