Deep in the Count (Love Has No Boundaries), Madison Parker 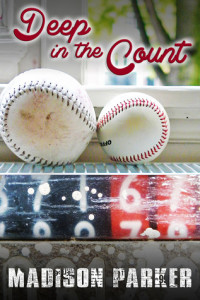 My luck with YA/NA books with jocks and nerds hasn’t always been that great. For some reason when I pick one up they are always the same story: The jock is in the closet and falls in love with the nerd. The nerd is either hesitant to date the jock or is too clingy. The jock ends up hurting the nerd because someone discovered the jock’s love for men and his reputation is on the verge of being in tatters.

Deep In the Count?  Not even close to the others I’ve read.

Brandon is a star baseball player at Virginia Tech University. He’s openly gay and has no problem with people knowing.  He is a popular pitcher and never lacks for friends. Brandon is out and he’s totally not ashamed of who he is or the fact that he is attracted to men. The girls want to date him anyway. The guys want to be him or at least spend time with him. His jock boy reputation is just fine, thank you very much, gay or no.

His best friend Jack is very straight but accepts him for who he is.  Jack is the stereotypical jock. His roommate, Corey, is the complete opposite of him and the dorm room proves this. Jack’s side is a disaster. Corey’s is perfectly organized with nothing out of place. During a visit to Jack’s room Brandon discovers that Jack’s roommate is gay. Corey isn’t there at the time but that gets Brandon thinking. Corey is a nerd and Brandon has always had a thing for the smarter guys.

“Really? You’re asking me if he’s cute? This conversation is getting way too gay.”

“Well, he ain’t Zac Efron.  He wears glasses.  And he’s always playing with one of those Rubik’s cubes.  He’s like, off-the-charts not cool.”

“I bet he’s really smart, though.”

“He’s a freaking brainiac, and I’m sure he thinks we’re a couple of dumbass jocks. Guys like him don’t hang out with guys like us.”

A few days later Brandon is having problems in a math class so he goes to the tutoring center. If he didn’t pass his math class, he’d be at risk of being placed on academic probation, which could cost him his scholarship.  Without baseball, what the hell was he going to do with himself? There he finally gets to meet the elusive Corey. It doesn’t take long before Brandon is letting Corey know that he’s interested in more than just tutoring but Corey is hesitant. Corey has his entire life planned out and he has no desire… or time… to get involved in any type of relationship much less with a jock who has yet to decide what he wants to do in the future. This kind of starts a back and forth that turned sexy quick. Corey’s way of ‘teaching’ Brandon the math he needs is cute and it’s sexy though Corey doesn’t so much as allow a kiss. But Brandon has a plan that will speak to Corey’s nerd side and I have to say it was one of the most unique ways of ‘wooing’ someone I’ve ever read.

I fell in love with these guys immediately. It is refreshing to see a jock written in a book that is not trying to hide who he is. Brandon knew what (and who) he wanted and he set out to win the man of his dreams. Corey is not your stereotypical nerd either.  Oh sure, he’s a smart guy and he focuses a lot on his studies but he knows (eventually) that he wants Brandon and when Brandon starts trying to win him with something dear to his heart he knows he’s sunk.

I’m a total baseball freak so this short was right up my alley. Not only is it about baseball but the author uses baseball terms to help Brandon with his tutoring. There’s even a glossary of baseball terms at the end of the book. And here I thought I knew all there was to know about baseball. I just learned new terms that I didn’t even know existed.  I won’t dare say which ones were new to me as I’d never hear the end of it from my baseball-lovin’ sons. Ah, but not all is great. Brandon is a Boston Red Sox fan (this reviewer is a huge New York Yankees fan, as in obsessed New York Yankees fan.  For those who follow MLB you know the two most definitely do not go together).  I was able to overlook that as it was only mentioned once. 😀

There is a great set of secondary characters from Jack to Corey’s bestie, Samantha (who lives 1,000 miles away and communicates with Corey via text or Skype).

The way that Brandon gets Corey to rethink his ‘anti-dating’ stance is via messages left for him in code.  Corey is studying cryptology so this is the perfect way to be won over. The last message is left for the reader to decipher. The author gives hints and even a website to go to for help or to just solve the code. I’m ADHD so I admit to cheating and using the site to decipher the final message though looking at it now I could have easily figured it out without any help. This is yet another unique part of this story.

I fell in love with this author’s writing style when I read another short of hers a few months back. I quickly became a fan and have since read her others. I would have a difficult time picking a favorite but Deep in the Count is up there. It’s funny.  It’s sexy. It’s really, really cute.  Highly recommended.

Overall, a great short. I loved all the characters and I found the story to be unique. I love how the author made each character ‘out’ so the story focused on getting the men together, not the trials of being in a relationship with one or both in the closet.  Another great read by Madison Parker.

This was written as a part of the Goodreads M/M Romance Group’s “Love Has No Boundaries” event.  The free download link can be found by clicking the link above.

This short story was reviewed for this blog at the request of the author.