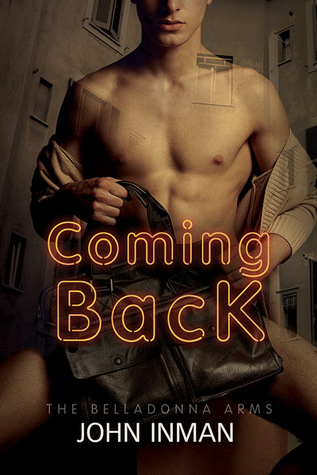 This review contains spoilers for those who haven’t read Work in Progress. Keep that in mind before reading.

Barney Teegarden knows what it’s like to be alone. He knows what it’s like to have a romantic heart, yet no love in his life to unleash the romance on. With the help of a friend, he acquires a lease in a seedy apartment building perched high on a hill in downtown San Diego. The Belladonna Arms is not only filled with the quirkiest cast of characters imaginable, it is also famous for sprinkling love dust on even the loneliest of the lovelorn.

At the Arms, Barney finds friendship, acceptance, and an adopted family that lightens his lonely life. Hell, he even finds a cat. But still true love eludes him.

When his drag queen landlord, Arthur, takes it into his head to rescue a homeless former tenant, he enlists Barney’s help. It is Barney who shows this lost soul how to trust again—and in return Barney discovers love for the first time in his life.

It’s funny how even the hardest battles can be fought and won with laughter, hugs, friends, plus a little faith in the goodness of others. All it takes to begin the healing is the simple act of coming back.

First off I have to say that as much as I love this series, I believe that Coming Back is my favorite. Don’t take that to mean that the other two (Serenading Stanley and Work in Progress) weren’t great books. They were. But man did the author bring out the feelings in this one.

We meet Barney on the first page of the book. He’s Pete’s coworker and considers himself to be a big nerd. He really is a big nerd, but a lovable one. I have this thing for guys who wear glasses, so I was all over Barney right off. 😉

Yep. Barney Teegarden. That’s me. Five seven. Hazel eyes. Mouse-brown hair. A little scar on my chin from a bicycling accident when I was twelve. Kind of skinny. And bookish. Very, very bookish. Today I was wearing baggy shorts, battered tennies, and a T-shirt that said Save Your Receipts. I had opted for contacts rather than glasses since my best pair of glasses were being held together by Gorilla Tape after another biking accident just a few days before, which also accounted for the Band-Aid on my bare knee.

Barney’s apartment building is about to go condo so he needs a place to live that doesn’t cost him an arm and a leg. Bookkeepers don’t make a lot of money so his buddy at work (Pete) suggests he check into the apartments at Belladonna Arms, where Pete lives with Sylvia (who we know and love from the first two books). Checking out Belladonna Arms means meeting Arthur, the resident drag queen owner. I think (if you’ve read my reviews of the others in the series) my love of Arthur is well known. He’s about 300 pounds and has this thing for bling and taffeta. He’s adorable in a big drag queen kinda way. This meeting between Barney and Arthur takes place on the grounds of Belladonna Arms while the residents are having a big yard sale. One glance at Arthur and his frilly ways kind of has Barney wanting to run for the hills, but he needs the apartment. A quickie introduction by Pete and Barney has a new place to stay. It doesn’t take long before he’s met and befriended everyone in the building. Of course, there’s one resident who hasn’t been seen or heard from in several months. That would be Ramon.

**Spoilers ahead if you haven’t read Work in Progress!** 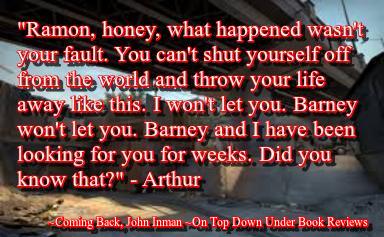 Ramon disappeared after the ‘incident’ between him and his partner, ChiChi. Remember ChiChi? The resident druggie and slut? Yeah, that one. I want to have sympathy for what happened to him, but I’m having a difficult time finding any at the moment. After that particular incident, Ramon took off. When Arthur gets word that Ramon had been seen in the area, he enlists Barney’s help to find the other man. Of course, Barney knows nothing about this homeless guy they’re looking for because Arthur refuses to tell him just yet. All that matters is finding Ramon and bringing him back to the Belladonna Arms where he belongs. 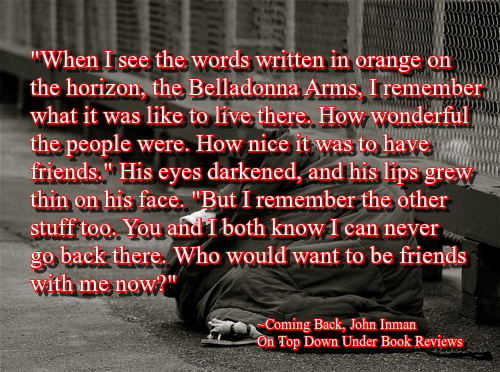 Did I say I cried like a baby while reading this? Let’s just say that when Ramon is found (after several days of searching by Arthur and Barney), my heart broke in a million pieces. Where was the sweet and funny guy from before? Who was this heartbreaking homeless man whose tears had me tearing up? Long story short, Arthur and Barney (who’d never met Ramon before that particular moment) force Ramon to come back home. He would be staying in the apartment next to Barney and that was that. No arguments allowed by Arthur. He found his boy and he was going to come out of his self-imposed hell if it killed him. Of course one glance at Ramon and Barney was feeling things he had no business feeling. Ramon was in no condition for any type of relationship, but Barney couldn’t help wanting him every time they so much as glanced each other. A quick friendship of sorts begins and before long they are very close. Not as close as Barney would prefer, but they become very close friends when Ramon isn’t quite ready to open up to his other friends in the building. Barney being an outsider plays a big part.

This is the Belladonna Arms where there’s magic in the walls. Maybe not real magic, but magic just the same. Those who move into the Arms always find love, even those as broken as Ramon who had found it and lost it with ChiChi. Could Belladonna Arms be working its magic again, only this time with Barney?

All the characters we’ve grown to know and love are all back in their glory. From the kleptomaniac couple to Arthur and Tom to Stanley and Roger and everyone else in between (including the crazy cat), the Belladonna Arms family is there to lend a helping hand (or haircut) because they’re family. Sure, it’s an odd family, but isn’t that the best kind? 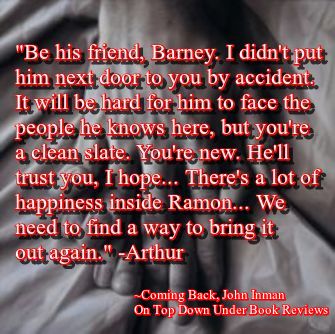 A lot of Coming Back is focused on Ramon and his healing. He feels massive amounts of guilt over what happened with ChiChi and he can’t seem to get beyond it, whether he’s sleeping under a bridge or in his or Barney’s bed. Thankfully Barney is there to lend an ear or shoulder and he slowly begins to heal. The pain is always there, but Barney’s friendship helps him to finally be able to move on. Not forget by any means, but to realize that nothing that happened with ChiChi was his fault in any way. Barney and Ramon’s relationship is a slow burn (they are friends first), but not so slow where the reader is tapping their foot and saying “hurry it up already”. It’s paced perfectly. Had it been rushed in even a tiny way, it never would have worked for me.

Then there is the humor. There is one section in the story (I won’t spoil it here) that had me laughing out loud. I swear I went from being teary to giggling in only a few pages. If you read this, I have no doubt you’ll do the same.

Overall, this is a fantastic book. Barney and Ramon are perfect together. I’ve adored Ramon from his first introduction way back when (though I wasn’t a fan of ChiChi) so it was a pleasure watching him finally find his own, real, happily-ever-after. He thought he had it with Cheech, but in reality he was just waiting on his nerdy bookkeeper to come along and show him what real love is. 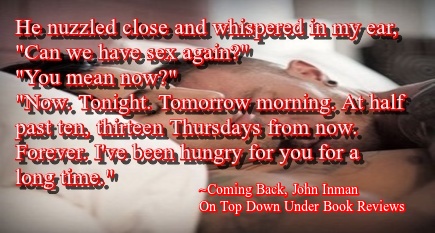 I absolutely loved Coming Back. I can’t recommend it enough. I know I sound like a broken record, but that cover? Just, wow. ALL the covers in the Belladonna Arms series are gorgeous.

Thanks, Cindi. I love this review. I’m glad you like Barney Teegarden as much as I did. Kisses.

You’re welcome, John. What’s not to love about a guy who wears glasses and is bookish? 😉

Cindi, you needed to raid our Pinterest Men in Glasses board – there’s some hotties on there, and they’re an homage to your…. passion 🙂

Really lovely review, you obviously loved this one, and I agree, wonderful covers.

That is my favorite Pinterest board. I definitely should’ve raided it for this review. 🙂

Thanks, Kazza. It’s a fantastic book and the covers on all 3 in the series are amazing.