*** Congrats to RAVYN who won the giveaway! Thank you to all who entered and thank you to Candi Kay for the great giveaway! ***

I’m very excited today as one of my favourite kinky ‘n crazy writers, Candi Kay, is joining in the Christmas spirit with On Top Down Under and giving away two of her Christmas themed e-books – Willy the Kinky Elf & His Bad-Ass Reindeer and Evan the Virgin Reindeer & His Sexy Buck.  I mean, come on, the names alone are so fantastic! I’ll also add that they reflect the novellas perfectly – fun, sexy, crazy and sassy, just what the naughty love doctor ordered for a Christmas pick-me-up. When readers put these books on their shelves as ‘weird shit’ and ‘author on crack’ also rating them highly, you just know you’re going to be in for a ride with both of these e-books. 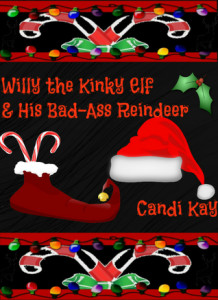 The North Pole isn’t exactly as it appears in fairy tales. It has the elves and Santa and his reindeer, but Santa and Mrs.Claus aren’t the jolly couple the world believes them to be. Far from it, actuallyreindeer, but Santa and Mrs. Claus aren’t the jolly couple the world believes them to be. The elves, while short, aren’t pointy-eared tiny men with squeaky voices. The reindeer are all shape-shifters who transform into gorgeous beings in human form. Feared by all, the reindeer keep to themselves and only associate with their own. Randy the Chief Reindeer is the most feared of all. The largest of the pack at six-five, Santa’s Village breathes a sigh of relief when he takes off on his Harley to parts unknown during the off-season.

Elf Willy is all about kink and will do almost anyone and everyone. The one he wants most is out of his league – Randy the Chief Reindeer. While drunk on Peppermint Whiskey, Willy is dared by the Master Elf to sneak onto Randy’s property to take a compromising photo. Getting caught is a given, as the Chief Reindeer values his privacy above all else. Does Randy kick Willy’s elfy self all the way to Tinsel Town? Or does he mete out a more appropriate punishment for the kinky elf? 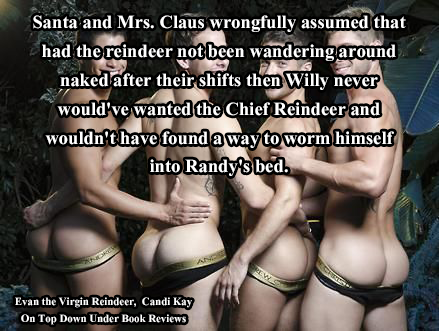 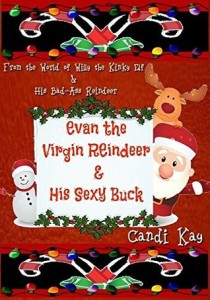 **THIS GVEAWAY IS NOW OVER. CONGRATULATIONS TO RAVYN**

Candi Kay spends her days being a good girl and her nights lost in her kinky imagination. After writing for years and doing nothing with it, she finally took the plunge and put her words out there.

You can find Candi on-

or email her at CandiKayAuthor@gmail.com. She loves hearing from readers!

Every time I see one of these titles come up on goodreads feeds they make me smile. I’d like to enter. 🙂

Yay! Thnx for the giveaway and cheeky guys!! Willy the Kinky Elf has been on my TBR since last year and now I wanna read about Evan the virgin. Ho ho ho for the giveaway. 😀

Thanks, Jessica. I hope you enjoy both stories. 🙂

Thanks, Ravyn! I hope you enjoy them as much as I enjoyed writing them. 🙂

Thanks to Candi Kay for the fun giveaway 🙂

The “weird shit” and “author on crack” are two of the best compliments I’ve ever received as an author. 😉 That’s seriously awesome.

Thank you for hosting the giveaway and good luck to all who enter!

These have put a smile on my face. I\’d love to be entered!

These sound great fun. Please put my name into the hat as well. Thanks

Thanks for stopping by and commenting, Dianna. Good luck! 😀