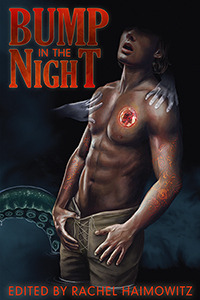 This anthology has a little bit of everything. There’s horror,  forced sexual situations, as well as pretty much every other thing you can imagine. I wouldn’t consider any of these really romance and of those that might be, I would say they all have HFN endings. There are monsters, spirits, tentacle sex, demons and even the devil himself. A nice anthology to be read during the month of October. However, if you are squeamish or offended by certain sexual situations, I say to pass on this one. If you have an open mind and don’t get a bit freaked out by things considered taboo, then I highly recommend it.

Josef’s lover Adel has died. Before his death, he and Josef planned ahead and formed a plan to bring him back to life once the deed was done. The story is quite short and there is no mention of what exactly killed Adel but the point is that he had known in advance that it was going to happen and he and Josef went to great pains to get the proper spells and magic in order for the resurrection to happen. The plan goes off without a hitch. But the Adel that returns is not the Adel of before. He’s rougher and doesn’t have the same mannerisms or warmth as the man Josef had fallen in love with.

A man is dumped by the woman he is engaged to marry and loses his job as a result (I won’t go into why). His best friend ‘encourages’ him to go hiking for a week not far from said friend’s research lab in order to clear his head. Throw in a monster in the woods, lots of forced tentacle sex and the best friend not quite being the friend he claimed to be. I want to say more but I can’t. Suffice it say that this is one fucked up little story.

When Noah takes off on a journey on his beloved sloop Ligia, he sails all over the Caribbean looking for this one island that others claim does not exist. Not only does he find it but he finds someone – or something – that turns his world upside down. Initially, it’s pure passion and happiness and Noah’s entire world is centered on this person who he considers a god. Only later is the spell broken and Noah realizes that paradise might not be paradise after all.

This is a nice story. It’s been awhile since I’ve read anything by Ally Blue and that’s a shame. This short reminded me quickly of what I’ve been missing.

Out From Under by Brien Michaels – 4 stars

Noel is tied to a demon and is unable to break free from his power. He is forced to do things that disgusts him and makes him feel shame, but he’s stuck with no way out. When the demon does something to his lover he knows that he will do whatever is necessary to get his lover back. If he destroys a specific man, Jason (his lover) will be back in Noel’s life exactly the way he was before – whole. Only things don’t quite go as planned.

I really enjoyed this. There is a bit of  build-up where the reader is unsure of how everything will eventually play out. This is more of a love story than the stories before it but the gore and violence are there as well. The ending was perfect.

Interesting story, yet hard to explain in a short review. There are priests, most of which come from different orders. Some are sent to kill those for their souls in order for the souls to be placed in an unborn child. When Yordan is ordered to take the life of one man for his soul, it is discovered later that not all is as it seems. Nice story, if confusing a few times.

Tobias is a man of God who has taken to caring for young boys. He considers himself a good Christian and believes he is righteous. When he is informed by his assistant that there is a man hanging outside the home, he goes out to confront him only to realize that the man is David, someone that Tobias knew well from his past. While Tobias had gone on a righteous path, David had not. Forced to sell himself to survive, he has now contracted a fatal disease and is in need of Tobias’ help. Tobias does not rush to help the man because he is too judgmental when it comes to David’s life path. After a meeting a day or so later, Tobias goes to a church to pray. Only there is another presence there, one who offers to save David – for a price.

I’m not sure how I feel about this story. On one hand, it was written very well. On another, I wasn’t too thrilled with where specific things took place.  Several things happen in this ‘church’ that are inline with the title of the story so I did know what to expect going in.

Nicely written, just maybe not for me.

This anthology was provided by Riptide Publishing via Net Galley in exchange for a fair and honest review.

Now that is quite the mixed bag of stories, tentacles and all! Really good review and I can see you liking it as I know you horror-loving ways 🙂

Thanks! It definitely had a little bit of everything. 🙂