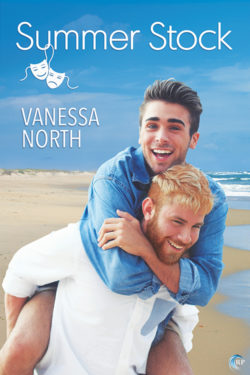 Tabloid scandals have driven TV star Ryan Hertzog to North Carolina’s Outer Banks, where he’s hiding out doing summer stock at his cousin’s seaside theater. When a hookup with local handyman Trey Donovan results in Ryan being photographed butt naked, he vows to keep his pants on and his hands off Trey.  How was he supposed to know Trey would turn out to be the summer stock set builder?

Trey isn’t looking for a relationship; he’s still recovering from the emotional fallout of an abusive marriage. But Ryan’s laughter draws him in again and again, and he’s not about to say no to fooling around.

As the summer heats up, the paparazzi catch Ryan in increasingly compromising situations. Ryan might be too much drama for a summer fling—and Trey might be just an intermission from Ryan’s Hollywood life. But if they take their cues from Shakespeare, all’s well that ends well.

Author of over a dozen novels, novellas, and short stories, Vanessa North delights in giving happy-ever-afters to characters who don’t think they deserve them. Relentless curiosity led her to take up knitting and run a few marathons “just to see if she could.” She started writing for the same reason. Her very patient husband pretends not to notice when her hobbies take over the house. Living and writing in Northwest Georgia, she finds her attempts to keep a quiet home are frequently thwarted by twin boy-children and a very, very large dog.

To celebrate the release of Summer Stock, one lucky winner will receive a Summer Stock swag bag! Leave a comment with your contact info to enter the contest. Entries close at midnight, Eastern time, on May 20, 2017. Contest is NOT restricted to U.S. entries. Thanks for following the tour, and don’t forget to leave your contact info!

Thank you for the tour. Love your site. Congratulations on the release. Chelcibrat16 at msn dot com

I am so looking forward to your next book, Vane! You did really good with this one. *beams*
mushyvince(at)gmail(dot)com

Thank you it’s been a fabulous tour.
humhumbum AT yahoo DOT com

Looking forward to reading this. As a child ages 7 to 12m I spent two weeks each summer with my parents and brothers in a rented house on the Outer Banks. Have only returned a couple of times since then. I’m immensely interested in reading this, so I’ve added it to my Goodreads To-Read list. jkenning at gmail period com

It’s been a great tour!

I hope you’re having an amazing release week!
serena91291@gmail(dot)com