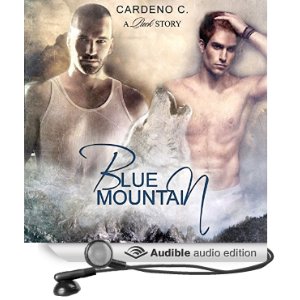 This novella is a bit more of a Cardeno C slow burn but with good reason. If you’re a huge Cardeno C fan then you will absolutely love this book. It’s a beautiful, yet sad tale of two shifters.

Male Omega Simon Moorehead returns to Blue Mountain with unfinished business. Not bothering to contact the local Alpha for permission, he plans to be in and out quickly but is caught by a patrol party.

The party informs the pack Alpha Freddy, while his twin brother Mitch is there, who is also an Alpha, but not the Alpha of any pack. Mitch is a loner and just there helping his brother Freddy, keeping others from trying to succeed them, but Mitch is a menacing 6’7” and has the pack terrified of him.

Both twins notice the scent of a male Omega’s blood wafting off the other men, and take inquisitive looks at each other, that sends Mitch Grant, the Alpha’s twin off like a bullet to find this lone wolf on pack lands.

Simon, who is now 25, is just about finished his business that bought him back to his homeland which he and his mother had to flee from when he was 13, due to being a male Omega. Just as he’s finishing up, all 6’7” of Mitch Grant shows up and even Simon manages to give him the slip, albeit briefly. Simon is expecting to die as Mitch carts him off.

Mitch takes him captive to Simon’s utter horror, because this is his worst case scenario and one that he and his mother have been running from for years. Not belonging to any pack for so long shifters have scented his male Omega and have given him and his mother no chance to stay put for very long at all. They have spent a horribly tragic life on the run for years.

To Simon’s shock, he is carted back to Mitch’s abode where he tries everything in his power to escape. Mitch will not let him go but also doesn’t hurt him which has Simon baffled. Simon is not your typical Omega male either and refuses to submit to his Alpha which is perplexing to both of them but as days turn to weeks, things begin to change.

The way Cardeno C writes this novella is no different to their other excellent storylines and building of the main characters – they grow and get to know each other. It’s a romantic but turbulent love story with sad memories dug up from the past, but as usual it all falls into place. It’s slower, but this is Book 1 in this series to keep you hanging out for more.

The narration is by Sean Crisden, and it’s one of the best Cardeno C Audiobooks I’ve heard to date. He has taken the characters voices on board and to me has given them the proper voices to match the characters conveyed in the novella. It’s an excellent audiobook.

Thanks for another great review, Paul. This looks like a very good story.

Thanks for the terrific review, Paul. Glad the narration was good, it makes it so much better.

Thanks so much, it’s always hard to write too much with a novella without giving too much away