I discovered an author earlier this year who is an Aussie and a relative newcomer in the primary genre I read in – MM, gay romance, or LGBTQ genre fiction, whichever name you feel comfortable with. His name is David Goldon, he lives in Melbourne, and today I’m interviewing him for our 6th Blog anniversary.

K: Welcome, David. It’s nice to have you join us for our 6th year of book reviewing.

DG: Congratulations on your 6th year, that’s an amazing effort. Thank you for inviting me, I’m a bit shocked and very flattered.

K: I was looking on your website the other day, and a couple of points stood out and made me take notice. Things like –

“David aims to infiltrate the GLBT literary world with stories of love, life and lessons learned with an Australian flavour.”

K: Being an Aussie I have an appreciation of ‘Aussie flavour’, but can you tell readers what flavour it is that you expressly want to bring to writing in this genre? Why that is?

DG: A simple sentence along the lines of ‘The January summer sun beat down on the footpath making it too hot for 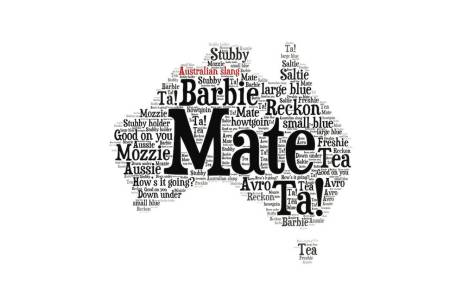 bare feet, so I had to wear thongs’ is uniquely Australian and familiar to Aussies. The word ‘mate’ is also bandied about frequently, so some of my characters speak like that. I will never resort to the awful stereotypical ‘shrimp on the barbie’ or kangaroos on every street corner type of thing. Australian LGBT fiction is scarce especially compared to other countries, I feel we’re underrepresented. I want to change that in my own little way.

I hope to pique the curiosity of overseas readers and offer them something different from the usual college-jock stories that come from America. We wear “jocks” in Australia. Hahaha!

K: Yes. Spare us from that horrible throw a shrimp on the barbie, we don’t even call them shrimp. We do wear jocks in Australia, 🙂  and thongs are on our feet. 😀

K: Then I also read the following –

“Being an avid reader of mostly M/M romance, I began to tire of predictable storylines and overdone erotica. I yearn to offer something different, something more, I want the stories I write to have a meaning, a purpose, twists and turns.”

I know that Engle Byen has a surreal yet paradoxically everyday feel. If you were to add something about your overall concept of not being ‘predictable’, what would that look like or be?

DG: Every book in the M/M genre that I’ve read follows a set format. Boy meets boy, have sex, they have an issue, have sex, they overcome that issue, have sex and they live happily ever after and have sex. The same authors and publishers follow that same format every time. I guess there is a market for it, but it bores me. That’s a very Mills & Boon way of publishing and very safe and uninspired. If I know how the book is going to end and I’m not fully engaged with the characters and story, I can stop reading it at any stage.

For Engle Byen a lot of people have told me it brought them to tears at the end. Depending on the reader’s interpretation of that scene they could be happy tears. Through my writing, I managed to elicit a strong emotional response. To me, that’s better than a standard HEA ‘oh what a lovely story’, close the book and move on. From the feedback I’ve received on Engle Byen, quite a few people have reread it and picked up clues they missed the first time. As in life often answers to questions are in front of you but you can’t see them. The biggest clue to what’s going on in that book is hidden in clear view on the front cover. I like those elements.

K: I’ve been searching for books I feel call to me with a more Aussie vibe of late. I have to be honest and say that, while I read a lot of American and a number of British writers, I do wish for more Aussies in the genre interested in our unique country’s backdrop and our culture. I appreciate a connection I can forge with familiar places and language. What do you feel you can offer LGBTQ writing in Australia? Something that can be true to Down Under but also, perhaps, universally appealing?

DG: I feel I’ve hit upon that in the second book, The Road to Engle Byen. It’s about life in cosmopolitan Melbourne. 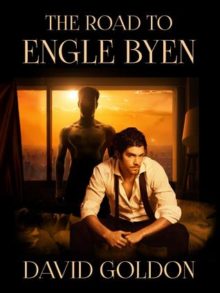 There’s an Australia Day party, drag queens and loyal Aussie mateship. I think I use my own voice when I narrate which also adds Aussie authenticity to the story. I’m also determined to represent every letter of the GLBTQ community, so there is something for everyone in the community. Characters in stories should be as diverse as the community, be it campy, bitchy, acid-tongued and so on. I find characters in M/M romance sadly missing that true-to-life uniqueness.

Also, when I gave the first draft of book two to my editor, we realised, along with the related Engle Byen short stories I was writing, that we not only had a series of books but that Engle Byen was perfect for a series of Aussie GLBTQ movies or even an ongoing TV series. There is still so little available in those formats with the magic of a true Aussie voice and characters.

K: I understand you took up writing unexpectedly. I think we’d all be interested in some more background on that. Also, how have you found it so far? What are you enjoying? Maybe some of the harder aspects of being a writer, or maybe being an Aussie writer in this genre?

DG: I went along to a newly formed local writing group to support my partner and his friend who started the group. I was content to dunk some bickies into my tea and leave it at that, but I got roped into completing a few writing prompts. The building we were in was steeped in local history and quite cold. I love spooky, scary things and picked up some type of vibe in there. When I read out the few paragraphs I’d written to the other participants, there was stunned silence and a few tears. That turned into the prologue of Engle Byen: A Place to Call Home. I haven’t stopped writing since.

I work full time and have no education above high school, but I won’t let that stop me. Just recently I realised I’ve written three and a half books in the past twelve months. In addition to that, also a few short stories that all have ties to Engle Byen. I love the feeling of new ideas that pour out as I begin to write. I was intrigued that the majority of writers and readers of M/M fiction are women. With what I’ve learned in the past year or so the odds are a bit stacked against me being a minority of a minority of a minority in what I’m doing. But that’s okay, I’ll keep doing what I’m doing anyway.

It’s also a challenge to find the right balance of language to use because American and UK audiences are used to different spelling and grammar, for example. We try to make it comfortable to all but to never lose that wonderful Aussie uniqueness which is clearly my “voice”.

K: As a cover lover, I have to mention that the cover of Engle Byen is beautiful. Did you create that cover or did 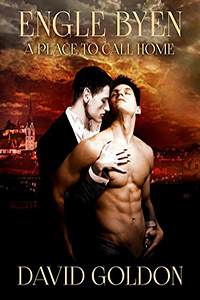 DG: Thank you, but I’ll leave cover creation to the professionals. That cover was a pre-made from Selfpub book covers. It summed up the story beautifully. The second book, The Road to Engle Byen, was by the same artist and again a perfect summation. Those book covers have a bit of darkness to them which suits the stories.

For the next book cover, I wanted to add a subtle reference to Australia, so I commissioned a custom made cover by the same artist with Aussie references.

K: Can you tell readers if there are any books coming out soon by David Goldon, or what we might expect from you in the near future? Any known titles yet?

DG: Before I finished Engle Byen: A Place to Call Home, I was strongly persuaded by my partner and Editor to write another one. I had no idea what to write then I realised I could write a backstory for the main character which would explore his life before he arrived in Engle Byen. The Road to Engle Byen became the prequel. It’s based in the gay capital of Melbourne, South Yarra. It involves falling in love, jealousy, mystery, and a drag queen.

The third book in the Engle Byen series is Opportunities. Again, this is a bit different. I didn’t realise it at the time, but it runs parallel to the first book. This is about three mature aged women working in an Op Shop in a country town. They all have something to hide including a lesbian relationship (I got the L in LGBT J). There’s gay men, of course, a little bit of mystery and a touch of paranormal. This should be out in March 2019.

I’m currently working on what should be the last book in the Engle Byen series (but I did say there would only be one when I started so you never know). This has a major twist that turns ENGLE BYEN on its head.

Thank you to David Goldon for joining us today for an interview during our 6th blog anniversary. It’s been a pleasure having him on. 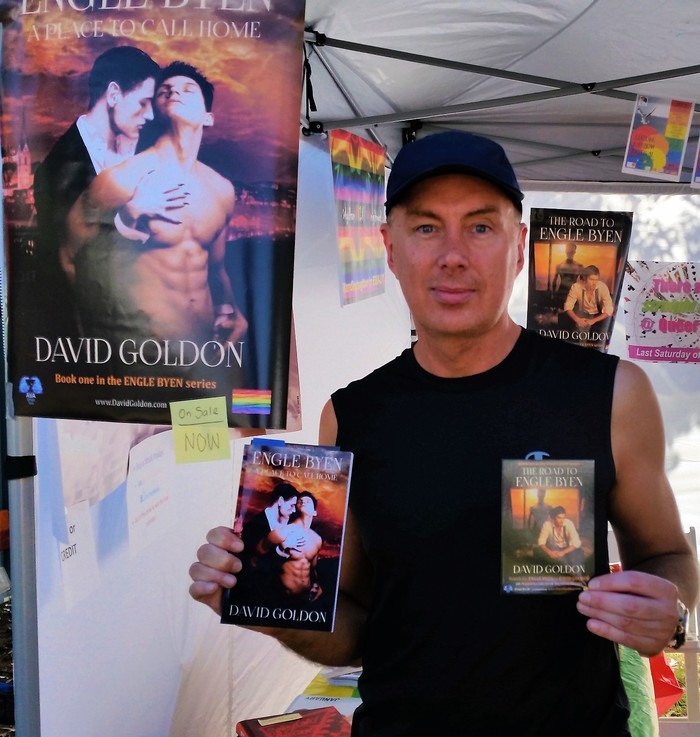 David attended a newly formed writing group to support his friends. He had no intention, patience or time to write any stories himself, or so he thought.

Inadvertently he was drawn into participating in some writing exercises. His long cobwebbed creativity began to emerge transitioning into a new found passion of story writing.

Residing in Melbourne, Australia David aims to infiltrate the GLBT literary world with stories of love, life and lessons learned with an Australian flavour.

I needed to have a sqiz at the interview when I saw it on twitter. Champion stuff. We need more Aussies having a crack so it’s good to know you’re about David. I reckon I just added a bunch of Aussie flavour! 😀

Ha ha, fair dinkum, Cobber. Too much? We’re all about the Aussie flavour and that’s a good thing 🙂

What a great interview. My very first book in the M/M genre was by an Aussie author, Zathyn Priest. He’s still a huge favorite now. When I read a book set in Australia I want the Australian spelling, the slang. I want to know more about the actual setting. It’s a pet peeve of mine when the spelling has been changed to the American spelling. I don’t always know what the slang words mean, but it helps having an Australian blog partner to ask. 🙂 It’s a breath of fresh air to see something different in the genre. The reason… Read more »

Yes indeed, a pet peeve of mine too, not using the right language and spelling for the country a book is set in. Like you said, it’s not hard to look things up if it’s slang. I saw someone the other day ask what ‘arvo’ meant. It will be on the internet but it’s afternoon – we tend to add “o” to everything and/or shorten names 😀

It’s inspiring to read about rising authors and their journey to have a book published. It gives me hope that I’ll go past planning and original manuscript phases.