First, I want to thank Kazza & Cindi for having us as a guest on their blog. Irene and I are excited to be part of your 5th anniversary celebration!

These last couple weeks have been intense, as we’ve been editing Nocturne and working our way through the (endless!) to-do list to get ready for our release. And as with previous releases, we’ve pretty much divided the chores between us without sitting down to decide who does what.

Tbh, I count that as one of the biggest perks to writing with Irene. She rocks the stuff I’m clueless about, but I enjoy doing the chores she finds tiresome.

Last year, when we were promoting Vespers – Book One in the Hours of the Night, we wrote a few blog posts about what it was like to work with a partner. (Actually, I wrote the blog posts, because that’s my job. LOL) This time around, I thought it would be fun to see how our feelings might have changed.

I asked Irene how she felt about writing with a partner, and here’s what she said…

It’s like a marriage. It’s not the big things that trip us up. Anything major, we hash out in epic Facebook chat streams. But the little things… once we almost scratched each other’s eyes out over whether to use “a” or “the” in a sentence.

Scratched each other’s eyes out? Yup. I will confirm the accuracy of that statement. Nocturne was our third book together, and I think we took things to a new level. We were less guarded with expressing our opinions, and therefore a lot more honest. To push the marriage analogy a bit further, I’d say with Nocturne, the honeymoon is over.

And I think the book’s a lot better for it.

With both Vespers and Bonfire, we had (or I had) a loose template for their plots. Vespers is a riff on Beauty and the Beast, and Bonfire is a mash-up of Stranger Danger and There’s Something Spooky in the Swamp. (Doesn’t that sound like a holiday story to you?) For Nocturne, we knew we had to advance a couple of the story arcs we’d started in Vespers, and we had to take the relationship between Thaddeus and Sarasija to a new place.

Irene approached it with her usual thoughtful, seat-of-her pants, grounded-in-the-character style. While I responded by blowing stuff up.

That may sound bad, but really it’s another way our partnership works. Irene’s generally the process, and I’m often the plot twist. (Although she did throw me for a loop with the end of the first scene in Nocturne. Wait till you see what she did!! I about had a heart attack!)

I loved it when I sent her a scene and she responded with “OMG I can’t believe you when there.” The difference between Nocturne and the other books was that she was more likely to push for the logical connections between events. At the same time, I pushed back on her, arguing for my interpretation and even (gasp!) suggesting changes in dialogue.

Irene and I have both been married to our current spouses for over twenty years, so we have a solid frame of reference when we compare our partnership to a marriage. And, you know, some days are better than others, right? At times, things might have been stressful, but I can’t tell you how valuable it is to me to have a partnership where we can have a vigorous debate and still be friends at the end. Irene says she’ll keep writing books in the Hours of the Night series as long as we’re having fun and she has questions about the characters. I second that, so stay tuned!

To celebrate our release, we’re running a sale! From now until the release day 10/12/17, Nocturne is marked down to $2.99 (regularly $4.99) and both Vespers and Bonfire are $0.99!! The buy links are below, along with an excerpt and a link to our rafflecopter giveaway. We’ve got a $25 gift card for somebody!!

“You said you were hungry.” Thad’s tone hinted at reproach. “There are no restaurants on this block and we have no need of” —a hint of red touched his cheeks as he scanned the items in front of them—“anything here.”

Sara smothered a grin. He had crashed hard after the funeral, woken up well after Thaddeus, and convinced the vampire to go out to eat. Thad had made it clear their current focus was Berta, not the Daemonum. Feeding Sara, an entirely Thad-approved activity, provided the excuse for a little detour.

They were in the touristy voodoo shop in the French Quarter, not a place Thad would normally bless with his patronage but the only lead Sara could think of for tracking down Missy. Intent on killing time until the pale Goth chick at the counter finished with the other customers, he hadn’t paid any attention to the items in the display they were ostensibly browsing. He picked up one of the bottles Thad was scowling at.

“Are you kidding? This ointment promises to attract the object of your desire for hours of unbridled passion. Who wouldn’t want that?” He blinked at the vampire, trying to look innocent. “Where do you suppose we apply it?”

He had meant to tease his boyfriend, who had an adorable prudish streak sometimes. Instead, he got the vampire. Thad’s eyes turned stormy, then black. Sara felt himself falling into the abyss as the vampire’s emotions rushed through their bond. Lust. Fury. And threaded through all of it, à moi p—

The connection closed so abruptly Sara almost fell over from the psychic jolt.

“And who do you intend to attract with this vile potion?” Thaddeus looked calm, but his voice came out low and deep and still carried an echo of vampiric reverb.

The vampire stared back, unappeased. “Then is it the hours or unbridled aspect you find lacking?”

Unbridled. Sara swallowed hard. Saturday morning had been pretty unbridled. And hot. And he did not need to think about that in public.

He swallowed again and tried to suppress the memory of Thad’s hands spreading him open, his tongue…

Thad gave him a predatory smile that did nothing to cool down the heat between them until Sara caught the tiniest flash of fang. Thaddeus?

Okay. Important note to self. No taunting the vampire in public. Thad looked one step away from pouncing on him and dragging him off to…not helping.

Sara tried to think about something, anything else.

Book Deals on the Hours of the Night series : 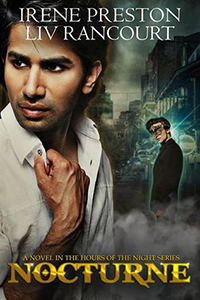 And don’t miss Vespers (Hours of the Night #1)

at the special price of $0.99 for the same period!

Thank you so much for stopping by during our 5th anniversary and for the great giveaway! I always love hearing about the writing process when authors co-write. Nocturne sounds amazing. Love the excerpt.

It’s great to have the authors on and I love this series, and it’s good to have the excerpt. I actually have a review that refuses to be written in draft for it. Pretty typical for me 🙂

I saw the co-write like you and me on the blog – you like one type of book, I like another, we do different things, we make a cohesive team.

I don’t know how it works for you two, but Irene and I sorta naturally fell into our tasks. We might debate word choice or motivation, but she’s not interested in blogging, and figuring out an advertising strategy makes my eyes cross. 🙂

Thanks so much, Cindi!!

Thanks for hosting and congrats on the blog-versary! And yeah, in IMO, the best things take teams who balance each other. 🙂

I’ve also wondered how authors are able to write books together. I don’t think I could do it! I’m too controlling lol. But I’m glad you two have decided to work together and work through all the arguments since the books come out great in the end!

I’m also glad they decided to write together because, like you, I enjoy the Hours of the Night series too. Sometimes it’s nice to have someone to share the load with but I’ve always struggled on team projects for the same reason you mention – I prefer control 🙂

Thanks, Kristen. 5 years has flown.

If you love New Orleans and vampires, then you definitely need to read theses books, Dee. Start at Vespers, you won’t be disappointed. Enjoy! 🙂

This was such a fun post! I have Vespers and Bonfire, but I haven’t read them yet. So, I can’t say how well the partnership works on that front (though the premises and snippets I’ve read give me positive vibes), but I loved hearing about it. The great “a vs the” battle is going to make me smile every time it pops to mind.

Wishing both Cindi and Kazza & Liv and Irene many more happy years making beautiful words together!

It was a fun post. Cindi and I understand teamwork with two of us running the blog, so we appreciate that. Oh boy, you need to start reading the books – such a good series. One of the best paranormal/UF series going around 🙂

I too have always been curious about authors who write together. This is a great post.

On uni break me and Nocturne are hooking up. Yeah, honey:D