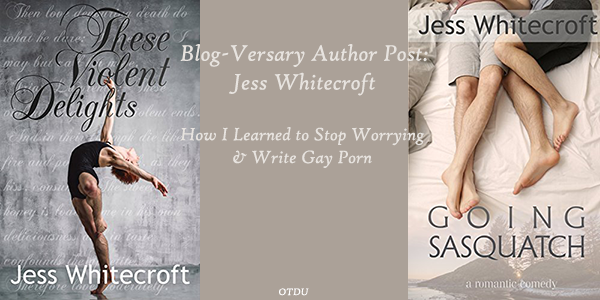 This year I had the pleasure, quite by accident, of picking up These Violent Delights by an author I had never heard of. I was compiling our Weekly Book Deals at the time, which is only a title because life gets in the way and it happens less frequently than weekly. The book was a freebie and I love ballet so I thought, ‘give it a go, Kazza, it’s free’. I can’t tell you how glad I was to have picked that book up because it was clever, hilarious, and sexy, whilst also containing current social commentary in amongst the romance of Milos and Tom. Then I grabbed Going Sasquatch and it cemented Jess Whitecroft at the top of my auto-read authors list – which is not long. Ms Whitecroft’s writing style is charming and funny, very funny, so when  she floated this title past me I thought it was perfectly tongue-in-cheek and suited the author’s humorous and authentic narrative. So while I can’t say that either of these books come close to being gay porn, they’re both sexy gay romance, it suits the author, it suits our blog, and it suits how you deal with lemons in life – you make lemonade… or write – as you’ll see while reading the author’s post.

It’s terrific having one of the best authors I’ve had the pleasure of reading in contemporary gay romance/MM in quite some time help us celebrate our 5th blog anniversary. So…

2017 was always going to be a bumpy year, coming on the heels of 2016. I’d seen it in as cautiously as I dared, having done the same twelve months earlier only for that mess to open with the death of David Bowie and get progressively worse from there. Didn’t want to jinx things.

In terms of writing I was not in a great place. I’d spent the last year trying to get noticed by small horror presses and had received nothing more encouraging than a lot of those ‘we like it, but…’ knockbacks that are always so much fun. I had some royalties floating in from a handful of romance novels I’d written a couple of years previously, and a quick (one eye shut, wincing all the while) look at my bank balance said that I would do well to crank out some more if I wanted to continue to eat. I had a small publisher who said they would definitely take another book from me, so it was time to get to work.

I still haven’t finished that novel.

Everything built up at once. For about eighteen months I’d had this ongoing situation with my bathroom floor. The shower area was leaking and my landlord kept coming by and applying various ineffective quick fixes to the problem. He would come over, squirt some kind of silicon goop into the gaps between the tiles and disappear again. Within a week the silicon goop would have peeled off on its own and every night my bathroom would get so damp that the shower floor ended up heaving with a Lovecraftian mass of the fat, slimy orange slugs that had slithered up the drainpipe.

I’d had just about enough of this and once more begged him to deal with the floor, which was starting to feel worryingly unstable. Every time you stepped on it the large tiles shifted ominously beneath your feet, like tectonic plates. He finally turned up, lifted a tile and revealed a hole in the floor that was the size of a large human head. And no, I hadn’t been bashing my head against the floor, although there had been times when I’d felt like it.

The book was going badly. It wasn’t clicking for reasons I didn’t have the mental resources to figure out at the time. My landlord was pouting about the extent of the water damage that he’d ignored for almost two years, I had no floor in my bathroom, a houseful of visiting relatives and a bank balance inching closer and closer into the blazing scarlet.

I kept my nervous breakdown brief; I didn’t have time for a longer one. I looked at houses to rent and developed palpitations. And the book stayed stalled, frustrating me further.

Then I got an email from the publisher.

Yeah, guess what? They were shutting up shop and wouldn’t be taking any more books, including mine.

I was done by this point. It was only March and already this year had out 2016’d 2016. I was broke, publisherless and sure to end up living under a bridge somewhere.

So I started writing another book. Because why not?

That book – These Violent Delights – kept me sane. In every spare moment I escaped the mess of packing tape and cardboard boxes and plunged into this crazy love story about a young ballet dancer and an English teacher who was probably old enough to know better but lonely enough not to care. I treasured those moments when I could stop thinking about moving house for twenty minutes, jump on the treadmill and wallow in the music of Tchaikovsky and Prokofiev while I did my daily cardio. I couldn’t remember the last time I’d so thoroughly enjoyed writing something; lately it had felt like being a writer was more of an affliction than a job, but that book seemed to fall out of my brain, because it was the one thing in the world that I felt I had any control over.

I think what I’m trying to say is that no matter how bad it looks, no matter how doomed you feel, there is something to be said for the pure escape of writing fiction. It’s one of the greatest escapes of all, and the greatest thing about it it that when it’s done, you get to share it. Even better, sometimes people even like it and ask you to write guest posts on their blogs about it. (Thank you!)

Anyway, I found a new place to live. It was great; had a bathroom floor and everything. My heart stopped feeling like it was about to squirm out of my chest. I even dragged out that unfinished novel and identified what was wrong with it, although by that point it was too late to do anything about it, because by then I was writing a romantic comedy about Bigfoot. Like you do. 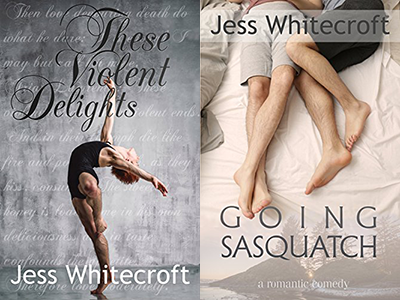 I know of so many authors who say that their writing has kept them sane, even during really difficult times in their lives. I remember talking to Kazza behind the scenes about Those Violent Delights. I always love it when I accidentally discover great books by new-to-me authors.

Thank you for stopping by to help us celebrate our 5th anniversary!

I don’t write but reading helps keep me sane so I can understand the need to be transported, whether that be the writer or the reader.

Sorry to hear about the rough patch you had but it’s lovely to hear that it was something that passed and you got “These Violet Delights” from it.

I purchased These Violent Delights after reading your review, Kazza, and I’m so glad that I did. Guess I need to get Going Sasquatch next. 🙂 The only problem is finiding the time to read. It’s been one of those years. I have so many great books, but things keep getting in the way of my reading time. 🙁

I’m glad I could steer you to These Violent Delights, Lisa. I love that book. You definitely have to read Going Sasquatch because it is funny and clever and the characters are so likeable.

I hear you, I have a lot of books to be read and nowhere near the time. It’s always something and that something makes reading hard. I hope things are well for you because I know what it’s like to have “one of those years” 🙁