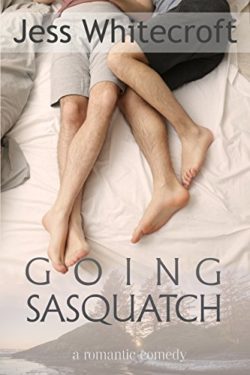 Lovestruck lapdogs, lazy Instagrammers and calcium deposits in the pool – Hollywood personal trainer Sean ‘Finn’ Finnegan is having one hell of a week, not helped when the much-feared agent Angie Lorde calls to demand if he knows why her hottest property – winsome superhero star Chase Morrow – has suddenly ‘gone sasquatch’ and apparently disappeared off the face of the earth.

Out of concern (and maybe a little unrequited love, let’s be honest) Finn goes searching for Chase, but this leads to a day so bad that when he does catch up with his crush, they both agree that the best solution to their very Hollywood problems would be to take off, head up into the Bigfoot country of Northern California and – like America’s favorite cryptid – pretend not to exist for a while.

When Finn and Chase discover that their long-attraction is entirely mutual, they also discover that going off the grid is not that easy in the 21st century. Especially if you’re an A-lister.

Who the hell is this author? They’re good. As good as any of the better current contemporary gay romance/MM writers, and this is only their second book. I hope they get widely read. Ms Whitecroft’s writing is intelligent, funny, sexy, has good depth and emotion, and their characters are delightfully quirky with human imperfections. I love them – whether that be Milos and Tom, from These Violent Delights, or Finn and Chase in Going Sasquatch.

Finn – aka Michael Finnegan, his parents didn’t think that name through too well – is a personal trainer to the A through to (the myriad) D list in LA. From Instagrammers and YouTubers who drink, pull stunts, snap pics, and party their way to fame, to movie stars with aggressive agents, Finn moulds that perfect body. His favourite client is  thirty one year old movie star 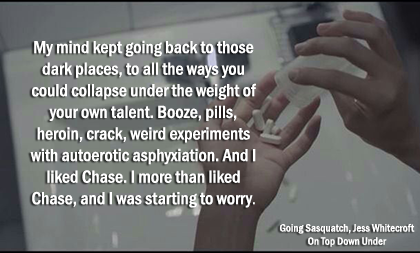 Chase Morrow. Chase is polite, works hard, takes all Finn’s dietary advice, and has a face and arse that star in Finn’s nightly dreams. When the most powerful and aggressive of Hollywood agents, Angie Lorde –The Lorde – calls Finn wanting to know where Chase is, Finn’s studio was the last place he was seen, she basically harasses Finn into looking into it. Stat! Finn has a few scenario’s of his own running around his head about what might have happened to nice guy Chase – he’s an actor, he’s in Hollywood, it could be plenty of things, none of them good, so he has a poke around. After a day of ditzy D-list puke, humping Bulldogs, a run in with a paranormal screenwriter’s security paranoia, via an electric fence, and the Ursula the Sea Witch of agents, Finn heads home only to find an anxiety-ridden Chase hiding out in his pool cabana.

Chase is burnt out and feeling even more stressed after a meeting with some studio execs and marketing people. He has to embody the straight macho action star that sells movies. He has to continue to be the right fit for the demographic that buys tickets, and not just in America, there’s Russia and China too. He’s had enough. He feels like the real him doesn’t exist anymore and he needs a break. Chase wants out of the craziness and falseness of LA… as of now. Given going overseas is out of the question at the moment, Finn suggests the rural delights near his home town in sasquatch country in Northern California. They both agree no agents, no mobile phones, laptops, no TMZ or E, no magazines, no contact with anyone else. A complete media and social lockdown. Just Chase and Finn.

“And then they started talking, more at me than to me, talking about target markets and demographics and audience share and genres, and that’s when it hit me, that I was no longer an actor.” He sighed again. “I was a ‘commercial property’, a commodity. A brand. I had to play for target audiences, to maintain a certain image that would work with product placement opportunities.”

What can go wrong when one half of the two of you is famous and you’re hiding out from The Lorde, and paparazzi, pretending to be newly wed squatch fanatics? Not to mention the other half is trying to keep his hands off the hot movie star he used to think was straight. But Chase definitely seems to be getting into the married role quite easily. Is it method acting? Because if it is, he’s pretty good at it. It seems and feels like so much more. Finn always thought their bodies were in sync on the yoga mat but in real life it feels like they’re even more simpatico. And isn’t that all kinds of hot?

This is a great kind of friends to lovers concept. I say kind of because while Finn has always lusted after Chase,

thought him a pretty grounded guy, how well do you really know anyone in Hollywood? Especially those who act for a living – on film, at red carpet events, awards ceremonies, and movie junkets. Finn and Chase get closer and closer, the chemistry builds, and after a while they’re having mind blowing sex, but can what’s happening last? Is it real? They’ll have to go back to Hollywood at some stage. Can Finn keep a secret he has from Chase? Can Chase come out of the closet when he’s an action movie star? Will sasquatch get in the way?

Finn is a major sasquatch sceptic, borne out of growing up around sasquatch fervour and an unfortunate twelfth birthday incident. Chase, however, is interested, and Finn’s family and Chase’s openness about the things Finn’s dad is passionate about, Sasquatch creations, are funny. It adds a real personal element and can easily feed some of our own offbeat and cringe-worthy or more, umm, memorable family moments of childhood. Then there’s the Mrs Kravitz neighbour who can spot anyone at ten paces, not good for Chase, and cannot mind her own business for trying – and isn’t fond of Harry Potter or Halloween.

“Oh my God, this is bad. I don’t suppose she has a reputation for…crazy, does she?”
“Crazy? You’re talking about a woman who took a baseball bat to a series of pumpkins because she thought Harry Potter was teaching devil worship to children.”

There are pokes at the last US election and the current Trump regime, These Violent Delights was similar. If you love Trump, or even third candidate nominees, maybe you won’t be so amused. Personally, I found the book 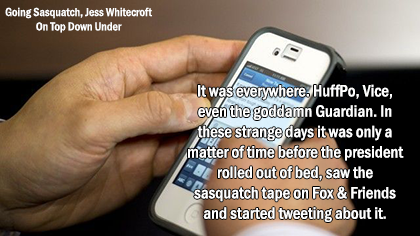 hilarious but I’m an Aussie and we’re all about sticking it to politicians. It can be somewhat snarky, which fits within the framework of the book and setting and characters. It’s intelligent, the satire really well written and balanced. Jess Whitecroft is superb at writing pop culture – current or retro – with references to movies, music, celebrity, events in time, and other interesting bits and pieces that are totally appreciated by this reader. The snippet of an invisible Marilyn Monroe in New York City was wonderful. How it segued into why people didn’t seem to recognise Chase Morrow when they were out was apt. It felt like it was part of the impetus for this book.

Along with the humour and the romance are some nice thoughts and endearing outlooks by the MCs. The book is told from Finn’s POV, but Chase has a POV for the epilogue, which was a good idea. There is no particular drama driving this book, but Finn has a bit of a brain-fart when he panics about what’s happening back in LA, and while I understood why he did what he did and Chase’s reaction, let’s just say I’m glad it wasn’t dwelt upon.

This was one entertaining read, one which I found myself laughing with into the early hours of the morning – sorry, dear hubby. If you can make sasquatch that little bit crazier, give me a peek into Hollywood, including the bitchy and the interesting, give me a reminder of some memorable info about Marilyn Monroe, include Peg Entwistle and the

Hollywood sign, Edith Piaf, plus snark out the last US election and slap Trump and his tweets around, all while two guys have passionate sex and fall in love, I’m in total awe.

I highly recommend this book to people who like a well written sexy, contemporary gay romance. You can take as little or as much away from the book as you like. I like some devil in the details and this book provides that around Hollywood, American pop culture and politics, and general human nature. But at the end of the day it is primarily a MM or gay romance novel, and the romance was terrific, complete with emotion. It was utterly fulfilling. The characters three dimensional and as part of a crazy family myself, I found Finn’s family value-added so much when they were in it. This book is another keeper and a re-reader for me by this author. I’m now a fan. Every way I look at it, Going Sasquatch is 5 Stars!

‘After a day of ditzy D-list puke, humping Bulldogs, a run in with a paranormal screenwriter’s security paranoia, via an electric fence, and the Ursula the Sea Witch of agents….’ That sounds like a pretty crazy day. 🙂

I love a good humorous book and it looks like this one was really entertaining. I avoid books that even mention politics like the plague but I’d probably crack up reading this one.

I can’t say enough about your visuals

It was one hell of a day to start off the book, lol. Politics can be polarising in books, humour is hard enough without politicians in the mix, but I think Jess Whitecroft is brilliant at it. She has great satirical chops plus her romance writing is good, the sex hot. 2 books so far by this author and I’m really hooked.