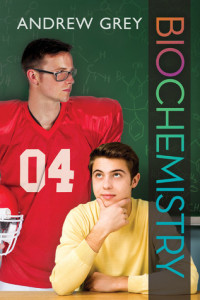 Freddie Samuelson is accustomed to getting everything he wants. His family is wealthy. He is the star quarterback at Dickinson College in Carlisle, Pennsylvania. He’s good looking. He’s popular. He has everything going for him. He has never been forced to work for his grades and has skated by all through school because of who his father is.  He has always either intimidated someone in class to do the work for him, used his father’s influence to get instructors to pass him or has paid off other students to make sure his assignments are done with him doing very little. When he takes a biochemistry class he discovers that his lab partner won’t bow down regardless of who Freddie’s family is and nor will the instructor. For the first time Freddie will have to do the work himself or be kicked off the football team.

Kurt Maxwell is new at Dickinson. It is his third year of college and he has finally gotten the hard-earned scholarship to attend the college of his choice. No dumb jock is going to take that away from him, regardless of how much he is bullied or pressured. When Freddie refuses to take notes and do his assignment during the first biochemistry class and assumes that Kurt will just hand his over, he is quickly put in his place. Kurt worked too hard to get where he is and he’ll be damned before he does something to cost him his scholarship. He eventually offers to tutor Freddie and during this time the very out Kurt realizes that he is falling for him. Freddie, who is definitely not out, is falling for Kurt as well. He knows he can’t admit he is gay to anyone or his father will cut him off and he will lose everything. When one kiss becomes something more Freddie predictably freaks out and hurts Kurt in the process. Kurt refuses to be anyone’s dirty little secret. After a bit of drama with Freddie’s father and a few others, they work things out and work toward their happily-ever-after.

This is the sequel to Organic Chemistry, but only in the sense that it takes place at the same college and Brendon and Josh are in it a few times, with Josh playing a larger part than Brendon. Josh is one of the coaches on Freddie’s football team and Freddie goes to him for guidance. I loved Organic Chemistry (my review can be found here) so it was nice seeing those two revisited. Biochemistry is an entertaining read but at times I felt like I was reading one of the many nerd/jock Young Adult books that I’ve read in the past. I’m not necessarily saying that’s a bad thing but it did ring a bit too similar to other books I’ve read that were labeled as YA. Had a couple of the sexual situations been removed from this book, I could have easily reviewed this on our Young Adult sister site Greedy Bug Book Reviews.

The first time that Kurt meets Freddie is when my opinion of Freddie was formed. Kurt is minding his own business and walking to his first class when Freddie and his jock friend come up in the walk path.  Instead of waiting for Kurt to move out of their way, Freddie intentionally bumps him and in turn causes Kurt to sprain his ankle. A get of out the way short stuff (or something along those lines) is thrown back at Kurt as he is picking himself up off the ground.  What I saw was a big bully and this behavior doesn’t change until a little ways into the book.

I was a sports mother for almost twenty years, having experienced every kind of sport parent and player you can imagine as all three of my sons played every sport they could from the time they were five until they graduated high school. I’ve seen kids like Freddie more times than I can count and I’ve seen parents just like his as well. In my own personal experience, kids like Freddie don’t just suddenly decide one day to buckle down. Not when they’ve had the same behavior their entire lives. Their parents will always find a way to make sure their child continues playing the sport of their choice and they will usually get away with it, especially if the parent donates a lot of money to the school. While it was nice to see Freddie try to change his ways I did not find that to be very realistic. This observation is from my own personal experience only.

One thing I did like was that Kurt refused to bow down to Freddie or anyone else. He stood up for himself and put Freddie in his place many times. Unfortunately, he also allowed himself to fall for the jock. The jock who ended up hurting him later because he could not be labeled as a gay man because of his father.  There were a couple of times that Kurt did not stand up when he should have but he made up for those times later.

I adored Kurt and later learned to like Freddie a little bit. I found that they worked well together once the issues of Freddie’s family disappeared. However, I don’t buy Freddie’s father’s behavior later as it is not consistent with his actions throughout the book. One thing I don’t get is this, why didn’t Freddie get contacts instead of glasses? A big deal is made about Freddie getting his glasses before a big game and the entire time I’m thinking “Hello! Contact lenses!” No matter, it worked for the story. It was also a strange coincidence as my oldest (who is as blind as a bat) also helped another player in the exact same way in his baseball playing days.

Something that has absolutely nothing to do with my opinion of the story but I can’t not mention it. If no one else gets why, my blog partner most definitely will.

“It’s not likely you’ll make it to the NFL. This isn’t Penn State, Ohio State, Auburn, Michigan, or USC. This is Dickinson…. “

Auburn? With two huge football schools in the state of Alabama, I did have to laugh at the fact that one of the worst teams in 2012 was listed as a great football school instead of the number one team in the country (for the 3rd straight year, I might add).  I’m a huge college football (and Alabama Crimson Tide) fan so I couldn’t end this review without mentioning it. 😉

Sounds like a cute book, but it possibly would have been a really good New Adult book. Good review, Cindi.

You know I couldn’t see the Auburn thing and not mention it. 🙂

It is a cute book but it could really almost be considered NA.