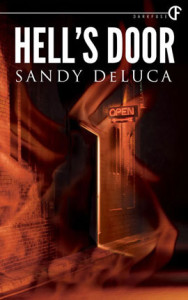 It’s rare for me to be blown away by the outcome of a book. I can honestly say that I am blown away by the ending of Hell’s Door. I thought I saw what was coming and I was correct in a sense but the author threw something out there that took me so much by surprise that I had to go back and reread the last ten or so pages to make sure I read it correctly. If you are going to read this, avoid all reviews with spoilers. You’ll be glad you did.

A sadistic killer is killing women in a sick and twisted way. Body parts are removed while the victims are still alive and horrific things are done to the women up until the killer finally gives them what they are at that point begging for – death. Detectives John Demmings and his partner Lacey Powers go undercover to try to find the killer as victims are piling up at an alarming rate. The bodies are all found without heads and with very little evidence left behind. The killer takes detailed notes of all of his/her killings, taunting the investigators by leaving the notebooks behind.

The prime suspect in the case is a female pimp named Ramsay Wolfe. Ramsay owns a dark nightclub called Hell’s Door where sexual deviants are the norm. Both John and Lacey are convinced that Ramsay is the killer but no matter how hard they try, they can not find the evidence. Going undercover as a couple, John and Lacey frequent Hell’s Door in hopes of snagging Ramsay and finally bringing the serial killer to justice. Lacey immediately catches Ramsay’s eye and the detectives know that it’s only a matter of time before they have the evidence they need to take her down.

There is not much I can say about this book without giving too much away. Suffice it to say that the story is twisted. The reader goes into the mind of the killer and what is there is terrifying and sick. The reasoning behind the killings is explained, though it is warped beyond measure.  The killings are brutally graphic and the author pulls no punches with laying it all out for the reader to see.

Overall, an outstanding book. It’s relatively short (at around 85 pages) but so much is said in so few pages. I highly recommend this to anyone looking for a good thriller that will keep you guessing until the very last page. I will definitely be seeking out more by this author.

This book was provided by Dark Fuse via Net Galley in exchange for a fair and honest review.

Ooh, it sounds nasty 🙂 but very interesting. I know you are a horror lover extraordinaire. Great and suitably cryptic review, Cindi!

Thanks! I absolutely loved it. I love anything that hits me in the face with something I didn’t see coming. I thought I had it all figured out but I was wrong. Excellent book. And yes, I do love horror. 😀