Because of Jade (Vasquez and James #5),Lou Sylvre 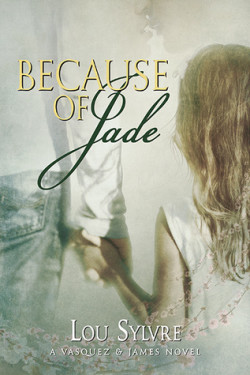 A Vasquez and James Novel

Luki Vasquez receives the news he’s still cancer free after five years, and he wants to celebrate with his whole family. He and his husband, Sonny James, take a road trip south, intending to gather at the home of his nephew Josh, Josh’s wife Ruthie, and Jade—a little girl who was still in the womb when she and her mother helped Luki beat lung cancer.

Halfway to their destination, Luki learns Josh and Ruthie have met a tragic death. The horrible news lays Luki low, but he pulls himself together in time to be the family’s rock and see to the dreaded business of tying up loose ends. The most important business is Jade, and when Luki and Sonny head home, they take Jade with them.

Luki and Sonny must combat self-doubt and fear and help each other learn to parent an unexpected child—and they must also nourish the love that has kept them whole for the past ten years. A relative’s spurious claim to Jade threatens the new family, and even if they prevail in court, they could lose their little girl unless they can rescue Jade from evil hands and true peril.

We meet Luki Vasquez and Sonny Bly James after their marriage of 10 years. It has been 10 hard years because Luki has to fight cancer, need an operation and still the fear that he was not healed and could die.

Luki and Sonny got scared because the doctor found enhancing abnormality on MRI scan and then found out that it was scar tissues after the operation, the old pictures for two years ago show that.

They visit the doctor in Seattle and then they visit a gay dinner club, the Metro, because Luki fears it would mean bad luck and his death if they did not visit the dinner club, and it’s a tradition for them now over years of doctor meetings.

Now Luki’s cancer free for 5 years and they want to celebrate wih family Josh, older brother to Jackie are married to Ruthie and they are uncles to Jade 5 years old. It was Ruthie that gets Luki to fight when she was pregnant with Jade.

Josh finally got a job in a refinery permanent, and with the offshore crew as maintenance on THUMS Islands, Ruthie’s pregnant, but have difficulty later in her pregnancy than normal.

Jade lost both her parents to car accident and hemorrhage that Ruthie lost her child.

Kohola Luki’s uncle  always to love and support his nephew, they talk a lot on the telephone and it’s him that gives Luki and Sonny the bad news.

Luki, Sonny, Jackie, Brian and Kohola support, love and help each other and Jade too mourning the lost of Josh and Ruthie. Luki and Sonny are the ones to make sure they are buried, house sold and that Jade is not alone.

Sonny fears he is not good enough to educate and take care of Jade. He misses Delsyn that lost his life and never got the chance to be a teenager and adult. He fears he will do the same mistake and Luki has to tell his husband it was not his fault and they did not know that someone illegal used Sonny’s ground as drug ring.

The workplace Ruthie works at was a legal firm, where Mr. Markowitz was attorney for Sonny. Crane, Crane and Markowitz are both women and homosexual. But one of their workers, Mavis is a homophobe/bigot/narrow-minded/fanatic religious holy/ cruel/evil. Blackmailing her cousin of past incest etc. She thinks she is doing the right thing for herself and Jade, because homosexuals can’t take care and educate a child *grrr* She contacts Ruthie’s long lost sister Sarah Jacobs.

The auntie and her husband Stephan threaten Luki and Sonny the first time they meet, if Jade is not going with them. They have a ultraconservative views of what Jesus wanted of them. They felt strongly that lack of “discipline” was hurting Jade in the long run. They went so far as to quote the “spare the rod, spoil the child” proverb. They want to “train up” Jade and “get the child into the habit of obedience and discipline” they are the same as Mavis. I hate that kind of people that misuse the Bible and say they are doing Jesus order *grrr*

Their friends Joanne the social worker and Mr. Worthy think that the Jacobs would never be awarded Jade. They can’t understand why the judge, Shipley, can’t see that and all the evidence that Joanne has evaluated is in favor of the Vasquez-James adoption and realize that’s where Jade would be best served. The adoption could then be finalized forthright.

Only with the help from Luki’s friends and past colleagues they found out about Mavis’s dark past and how she blackmail Shipley to accept Aunt Sarah and her husband Stephan to be the parents to Jade. Mavis does not care that aunt Sarah and Stephan abuse Jade mentally and later physically. She would have destroyed Jade’s childhood and still think she’s done the right thing, I hate that kind of fanatic religious holy people, that think if they only pray that every one of their sins are clear *grrr* Those three, Sarah, Stephan and Mavis, are the worst cruel/evil kind of people, demons in human skin.

I love this book. To meet Luki and Sonny again, their family. They are fighting for the right things and not some kind of fanatic religious holy lies that would destroy the family and  Luki, Sonny and Jade’s life. 5 Stars

Thanks for reviewing Because of Jade, Helle 🙂 I’ve never read Lou Sylvre before. I’ll have to change that now.

Thank you for the honor reviewing this book Kazza 🙂 I Love Luki, Sonny, Jade, Jackie, Brian, Kohola and Joanne <3 I am so happy for this family and team, their love and support. I hope Lou would write about Jackie and Brian, to know about their relationship and hopefully future marriage *fingers crossed* to p.o.v. From Jackie and Brian . It can't stop here, please?

I know how much you love this series as I often see you updating as you read. I’m glad you got to review one on here 🙂

Thanks for the review, Helle. I hope the author writes more in the series that you are so into!

Thanks a lot Kazza 🙂 I hope that too…

This looks like a really nice series, Helle. I love books about family and with children in them. I can tell this one would get to me for a variety of reasons. Thanks for the review!

me too Cindi. (Hand to heart)

It was honor to write this review Cindi and I also Love books about family and children <3 It is a really great and amazing series and I hope Lou will write some more books of the characters I need to know more about Jackie and Brian *fingers crossed* how it is going with Luki, Sonny and Jade when she gets older etc. 😉