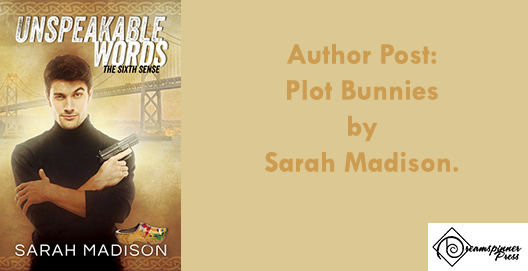 People often ask me where I get my ideas for my stories. We as writers frequently joke about plot bunnies, as though they were entities separate from ourselves that needed special care and handling in order to thrive. To a certain extent, I think that’s true. So here are my tips for the care and feeding of plot bunnies:

When I wrote Unspeakable Words, Book One in the Sixth Sense series, the question I asked myself was this: what if someone who had it all—looks, talent, and charm—accidentally acquired some kind of superpower, and instead of making his life even better, it turned his world upside down? From that premise, I sat down and figured out what I wanted the extrasensory gift to be, how it came about, and what effect it would have on his life. As soon as I answered a question to my satisfaction, two or three more arose—and the Sixth Sense series was born.

The revised and expanded version of Unspeakable Words is available for pre-order now, and will be re-released on March 10th, 2017.

I’m currently working on the fourth and final installment in the series, tentatively titled Deal with the Devil. Current release date sometime in 2018. I hope you’ll join me in celebrating the relaunch of the series, or coming to the party for the first time. I think you’ll enjoy it.

The Sixth Sense: Book One 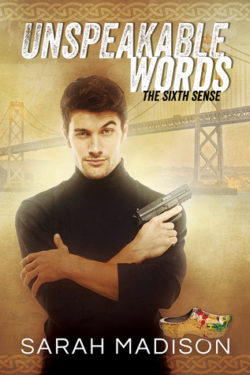 Special Agent John Flynn is everything Jerry Parker is not: dangerously handsome, coolly charismatic, and respected by his peers. Special Agent Parker is dedicated and meticulous, but his abrasive personality has given him a reputation for being difficult. When new information on a cold case appears, Parker is assigned to work with Flynn, and the sparks fly as their investigative styles clash. Contact with a strange artifact changes everything when it bestows unusual and unpredictable powers on Flynn… and the two men must learn to trust each other before a killer strikes again.

Jerry abandoned his conversation with Flynn to look for the owner of the voice from his past. His heart squeezed painfully to a halt at the sight of Derek standing on the sidewalk behind him, only to restart at double-time.

Jesus. Talk about running into your ex.

Derek wore a brown blazer over a tan turtleneck, with a brightly colored scarf carelessly thrown around his neck. Jerry had a momentary spurt of irritation for the affectation and then felt his heart sink. There was no way he could avoid speaking to Derek without looking churlish, and he didn’t want to give him that satisfaction.

“What are you doing down here?” Derek’s voice was inappropriately coy as he raised an eyebrow in Flynn’s direction and gave him the once-over. “Aren’t you going to introduce me to your friend?”

His sun-bleached hair was overly long and curling at the collar, and Jerry was secretly amused that it appeared to be getting thin on top. Derek had creases at the corners of his eyes as well. Too much time in the tanning booth, no doubt.

He must be having a cow over that.

It must be harder now for Derek to catch the attention of some sweet young ass, unless the young thing was desperate for a sugar daddy.

This is the guy that I thought I loved once. Boy, was I an idiot.

“Partner?” Derek glanced swiftly at Jerry’s left hand and then gave a little laugh. “Oh, partner,” he repeated without explanation, shooting a sly smirk at Flynn.

Jerry felt Flynn go rigid with tension, like a dog with his hackles up.

Flynn shot him a wounded look, and Jerry felt ashamed when he realized Flynn wasn’t embarrassed by Derek’s innuendos, he was pissed off on Jerry’s behalf. That was just…. Wow. Warmth suddenly flooded him, and he was both embarrassed and comforted at the same time.

Inexplicably, Flynn’s face relaxed, and a lazy smile appeared. “Yes, partner.” He practically purred as he placed a hand on Jerry’s arm. “Come on, Jer. We don’t want to be late for that interview.”

He guided Jerry away with a decidedly possessive hand on the small of his back.

“What was that about?” Jerry hissed as they left Derek openmouthed behind them.

“That asshole,” Flynn growled. “I can’t believe he cheated on you with a twinkie.”

Jerry stumbled and then laughed. When he quickly glanced over his shoulder, he saw Derek staring at the two of them speculatively. He laughed even harder and clapped Flynn on the back.

“It’s ‘twink’ if you really want to be cool,” Jerry corrected him.

“Asshole.” Flynn repeated the epithet for good measure, sounding pissed off again. “I wanted to punch him, but then I realized what would jerk his chain.” He appeared insufferably pleased with himself.

“You’re an idiot,” Jerry said with amusement. “A nice one, but an idiot all the same.” It’ll be all over town by this evening that I have a hot boyfriend. He fixed a sharp look on Flynn to check his reaction, but Flynn merely whistled innocently. “Come on,” Jerry sighed, not knowing what to make of the gesture. “We’ve got work to do.”

Sarah Madison is a writer with a little dog, a big dog, an even bigger horse, too many cats, and a very patient boyfriend. An amateur photographer and a former competitor in the horse sport known as eventing, when she’s not out hiking with the dogs or down at the stables, she’s at the laptop working on her next story. When she’s in the middle of a chapter, she relies on the smoke detector to tell her dinner is ready. She writes because it’s cheaper than therapy.

If you want to make her day, e-mail her and tell you how much you like her stories.

I often hear authors talk about plot bunnies so it was really cool to read this. Great post. I love the excerpt. Thank you to Sarah Madison for stopping by!

Never in my life have I had a plot bunny but it all sounds right to me. It has to be hard to work and then allow the plot bunnies freedom when you can find the time to write. By the way, I really enjoyed that book where the gargoyle came to life of an evening – Raincheck by Sarah Madison 🙂