People in Pennsylvania smile at the way I talk. Sometimes I talk funny, it seems, though I never knew that. “Say that again,” my dentist blurts out, as if he’d never heard anyone say “You betcha” or “For Cripes sake” or “I asked her if she’d wanna come with when I go by the library.”

Every region of the USA has its own speech patterns. They’re cozy and familiar to those who live there, and perhaps comical to those who don’t. If you’re from Wisconsin, it’s natural to contract some place names, like Mwaukee (Milwaukee) or Trivers (Two Rivers), and expand others, like Chi-caaago. My Philly husband loves to make fun of the latter. I make fun when Philly natives say “wooder.” That’s “water” to the rest of us.

Two bangs on the door preceded it being flung open and an excited Racko, bundled like a dogsledder against the cold, stepped in.

“Hey, Matty! We got ourselves a situation.” She stopped in her tracks, eyes growing large and her smile even larger when she spied John, who had snatched up the blanket and was trying to hide the fact he wasn’t wearing trousers. “Never mind.”

“Look at this walleye! Trophy size!” Matt crowed, holding up the fish.

“Holy cripes! Is that a walleye or a muskie? And it looks like you caught more than a fish.”

“Racko, John Lutz. John, Racko… a.k.a. Kristy Tipp. Think you can you get me the big cooler out there?”

“You betcha!” Racko closed the door behind her but was back in a minute with the cooler. She’d probably had to dig it out of some snow.

Writing characters from Wisconsin was fun. I did a lot of talking out loud to myself, which confused my poor old poodle but, I hope, resulted in fun dialog for readers to enjoy. 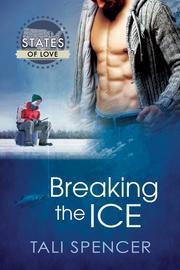 For Matt Wasko, February in Wisconsin is the best time of the year, and ice fishing on Lake Winnebago is his idea of heaven. With shanty villages cropping up, barbeques on the ice, monster sturgeon to spear, and plenty of booze to keep everybody warm, things couldn’t be better—until a surprise storm hits and an uninvited guest shows up at his frozen doorstep.

In the close quarters of Matt’s fabulous ice shanty, between stripping off wet clothes, misadventures with bait, and a fighting trophy-sized walleye, the two men discover creative ways to keep the cold at bay. And when John confesses his long-running attraction, Matt must decide if he can believe in John’s change of heart—and crack the ice for a chance at finding love.

Thanks so much for hosting me! <3

Thank you to Tali Spencer for stopping by and for the great post. Breaking the Ice looks really good.

I’m from the deep South so we’re often told we talk funny. 🙂 I was actually in Wisconsin a few weeks ago and got ribbed a lot for my so-called accent. I don’t have the accent, you guys do. lol

I love listening to my friends from the South. Downright musical. If you have to have an accent, that’s a good one!

I saw this post and it made me think about the last time I went fishing and I remembered it was with my dad. Thanks for the fun post about Wis-Kaaasin and about Breaking Ice! 🙂