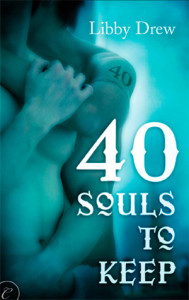 A refreshingly unique story about two men, one a CPS worker….. the other a complete mystery… who desperately fight to save a little girl.

Seven years ago, Jase woke up on a park bench.  He had no knowledge of where he was or why he was there.  Most importantly, he did not remember anything about his life, including his own name.  He had no identification nor did he even remember what he looked like.  An older woman and her grandson, Christian, take pity on him and take him to their home.  While there, Jase discovers that he has certain abilities that he can not explain.  He also discovers a tattoo on his left arm of the number 40. He has no knowledge of how and when it got there.  The name Jase is given to him by the older woman in memory of her son, Christian’s father, who died years earlier.

Lucas Jacobson works for Child Protective Services.  He is called to the scene of a double murder to pick up a child, Macy, who managed to allude those who murdered her parents.  This is not a typical case for Lucas  as almost as soon as he has custody of the little girl, he and Macy are in danger.  He takes her to the hospital to get checked out only to be thrust into the middle of an attempted kidnapping.   Whoever killed Macy’s parents are determined to get her, regardless of who is hurt or killed in the process.

For seven long years, Jase has been led by a compulsion to save specific people.  He is guided by visions that he does not understand but he knows he must follow up on.  It is critical that he do so or these people will die.  For whatever reason, these people are meant to be saved and Jase must be the one to save them.   He has traveled all over and has saved thirty-nine people to date in those seven years.  After gaining a little bit of information from a man he meets along the way, he learns that once he saves number forty that he will regain his memory and be able to go back to the life he left behind… the life he does not remember.

Jase’s visions pull him to the hospital where Lucas has taken Macy after the murder of her parents.  After an awkward meeting with Lucas, who refuses to allow the stranger near the little girl, he takes a step back in order to figure out how to get through Lucas in order to do what needs to be done.  Walking away is not an option. He must save Macy.   Shortly after, Jase is shoved into the middle of an attempt to kidnap the little girl from the hospital.  After helping Lucas save Macy, the story really starts to unfold.  Both men are determined to protect the child but for entirely different reasons.  They form a reluctant alliance and are forced to go on the run.. together. When Macy is kidnapped from under their nose, they are in a race against time. They are unable to decipher who the good guys are or who are out to kill them.

This is a very good book.  It is not your typical M/M story.  While there is a bit of romance (though I’m not sure that romance is the correct word to use in this case), this does not take center.  Macy and Jase do.  You will wonder why someone is so determined to get to Macy and why someone brutally murdered her parents.  You will wonder why Jase has the abilities that he has and you will wonder if he will ever find out who he really is.  Was he married?  Did he have children?  Who was he seven years ago?  What kind of life was he torn away from?  Why was he chosen?  Most of these questions are answered though I still found myself with a few at the end.  These questions did not (in any way) take away from my total enjoyment of this book.  Some things are meant to remain a mystery.

The characters are written perfectly, from Jase, Lucas and Macy to every secondary character that they meet along the way. While the story is definitely serious, the author throws in a bit of humor between Jase and Lucas that kept it from being too dark.  The intimacy is not overly done and there is not a lot of sexual contact.  I did not miss it. Had the story been overrun with it, it would not have unfolded properly. Kudos to the author for placing the focus where it belonged:  Macy and Jase.

The bad guy was relatively simple to figure out early on but the reasons behind it were not.  I admit to being extremely surprised when that came out.  Actually, I found myself surprised often.  Just when I thought the story was going one way it went another.  The resolution (in regards to Macy, the number forty and Jase) is perfect.  I can honestly say I did not see that coming.

Overall, an excellent book.  There is more than enough mystery and suspense to keep you guessing.  The relationship between Jase and Lucas is perfect.  Macy is written as a very intelligent little girl but she is also written as her age:  7.

I highly recommend this.  If you are looking for a book that is full of sex or typical romance, find another book.  This is so much more than that and for that, I am grateful.