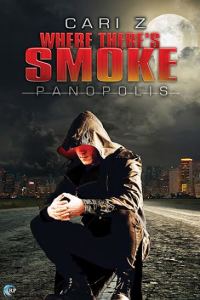 Panopolis is a rough place to be an average Joe. I came here looking for adventure and excitement, but nobody cares about one more normal guy in a city filled with super-powered heroes. The closest I’ve come to glory is working in a bank that villains often rob.

But then I maybe accidentally-on-purpose helped a villain escape the hero who was trying to save the day. Imagine my shock when, a week later, that villain asked me out for coffee. One date turned into more, and now I’m head over heels in love with Raul.

Falling in love with the guy dubbed the Mad Bombardier isn’t without its downsides, though. I’ve had to deal with near-death encounters with other villains, awkwardly flirtatious heroes who won’t take no for an answer, and a lover I’m not sure I can trust. It’s getting to the point where I know I’ll have to make a choice: side with the heroes, or stand fast by my villain.

Either way, I think my days as a normal guy are over.

I’ll start by saying that I don’t like graphic novels. I don’t like (Marvel or DC) comics. I don’t like superheroes and villains. So why did I choose to read this? Because I read the terrific Rules to Live By and Cari Z had House Rules in that anthology, which I enjoyed, so I wanted to read more by her. Thank goodness  I decided to give this a go because it was very, very good.

Panopolis is a hotbed of activity – Heroes who are genetically modified or built, Villains who can be the same. Except The Mad Bombardier – named after his personal preference for pyrotechnics and bombs – who came to Panopolis from Spain. He was part of a Basque Separatist family and learned the ‘trade’ from age five accompanying his father. His family are dead and he came to Panopolis to do what he knows best in a city known for it’s Villains as well as its Heroes.

The Mad Bombardier meets Edward when he holds up the First National Bank where Edward works as a clerk. Wearing his black trench coat and

red numbers on his forehead on a mask is pretty intimidating. Edward is shaky but for some reason TMB is kind to Edward, assuring him he won’t hurt him. When ex cop, now Hero, Freight Train shows up, Edward somehow feels a draw to the Villain who was kind to him in a crisis, even one of his making, and not the Hero. In a city where he’s a nobody… that kindness is a rarity. So when things get tight, Edward helps the Villain without detection.

The Mad Bombardier doesn’t forget Edward’s help during the last part of the robbery and sends him flowers at his work place with a note asking him to meet up if he’s interested. Edward’s definitely wary but intrigued, so he goes.

They connect and Edward Dinges and Raul Tremblay, aka The Mad 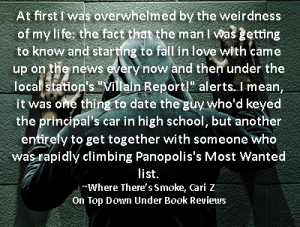 Bombardier, start a relationship.  It isn’t long before Edward gets promoted to manager – the banking business takes a toll on people in a town full of Villains – and an unlikely pairing of Villain and Ordinary Joe fall for one another. But life is not always that simple and we all have choices that we have to make – or have made for us.

The narrative has that retro comic vibe to it while also seeming current. Every chapter is headed up by SuperTruther a blogger who makes observations on the machinations and politics of Panopolis. SuperTruther gives the reader an idea about what’s going to happen each chapter. It’s really informative and well done. 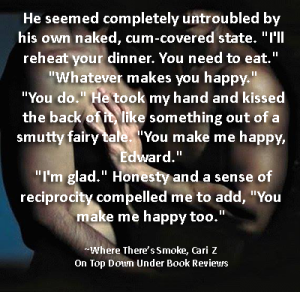 also making sure the reader connected with the MCs. Edward and Raul were not neglected whatsoever and had real chemistry and passion in amongst action and world-building. Sex scenes while minimal, which was perfect for the type of story, were really steamy. Great backdrop, terrific characters and connection, excellent writing and my kind of stick-it-to-the-man anarchists means I cannot wait for the next instalment. That cover is also superb. 4.5 Stars!

“Fascinating little game, Sims. Especially when you reprogram it to reflect a more villainous society. You get the good and the bad, and then every so often you get someone like you, Mr. Dinges. Someone who skirts the line between the two. A grayish blob in a crisp polka-dot world.” He beamed at me, “I’d love to get inside your mind.”

This looks really good. Like you, I’m not a big fan of graphic novels usually (though I have made exceptions for one particular author in the genre). But sometimes different is good and I can tell that Where There’s Smoke was a nice surprise. Great review of what I can tell is a nice start to a series.

Thanks Cindi. I guess when we sometimes step outside for a little different reading it’s worth it. It is a good start for sure 🙂