What’s in a Name? Pat Henshaw 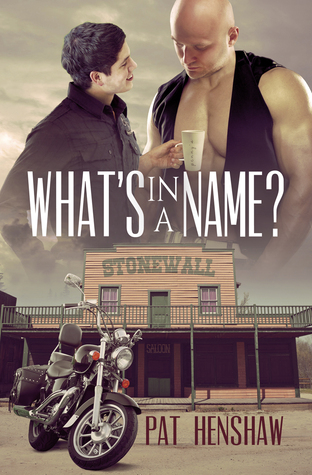 My apologies for the length of this review. Also, the photos and quotes I used – the quotes are from the book, but don’t go into it thinking this is a sexual story. It’s not. There is no on-page sex.

Barista Jimmy Patterson thinks it’s a good idea to get rip-roaring drunk on his birthday after he’s dumped by his boyfriend. When the burly owner of Stonewall’s Saloon rescues Jimmy, the night starts to look up.

Now Jimmy just wants to know the bartender’s first name since he’s worn a different name tag every time Jimmy’s seen him. “Guy” Stone gives Jimmy seven guesses, one for each night he takes Jimmy out on a date.

While Jimmy’s trying to come up with his name, he’s distracted by the destruction of his coffee shop and what looks more and more like a hate crime.

Jimmy Patterson owns a coffee shop with his best friend. He’s also been living with Alex for about a year. Jimmy and Alex frequent a local bar and go there for Jimmy’s birthday. Apparently (though the reader isn’t really privy to the details) Alex has been kind of a flirt all the previous times they’ve gone to the bar. No, he wasn’t just a flirt. He was the ultimate jerk, always on the prowl trying to pick up other guys. It didn’t matter that Jimmy was left sitting alone at the bar while he did his thing with the other men. Jimmy, more than a little naive (in this reader’s opinion) apparently just assumed that Alex the boyfriend was just being sociable and friendly. He didn’t really mean anything by it. I said naive, right?  Yeah, well, Jimmy was so naive that he didn’t see that he was being disrespected every single time they went to the place – but the bartender did. He’d been watching it happen for months. On Jimmy’s birthday, like I said, they go there again. On this particular occasion Alex decides to take off with another guy, leaving Jimmy sitting at the bar talking to the bartender. With it happening so often (the flirting by Alex with others), Jimmy and the bartender have spent a lot of time getting to know each other while Alex was being a jerk. They develop a friendship of sorts. When Alex takes off with the other man, Jimmy decides to drink himself into a stupor. The bartender (“Guy”) takes pity on the poor man and takes care of him when he gets sick. Almost puking on Guy aside, Jimmy ends up going home with him and wakes up with a hangover from hell. The next day – after the break-up with Alex – everything starts happening quickly. In my opinion, much too quickly. 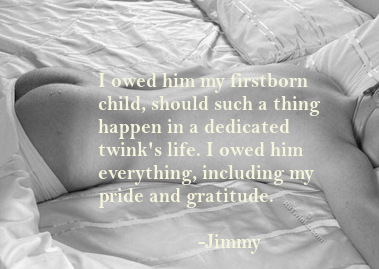 Guy takes Jimmy in but it’s more than that. There’s going to Jimmy and Alex’s condo to get some of Jimmy’s stuff, to facing the ex to, well, a relationship. Everything literally happens in a span of a few days. Jimmy and Guy had become friends at the bar over the previous months, but it went from nothing to bam! in the relationship department pretty damn quick. All that was fine with the exception of the Alex thing. If Jimmy and Alex had cared enough about each other to share a condo, where was the pain of the break-up? Sure, there was a tiny bit of emotion on Jimmy’s part when he had to face the ex the next day, but that was it. No mourning the loss of the relationship. No wondering what’s going to happen to the condo and his other stuff. No … anything. It went from a quick break-up with a man he’d been in a relationship with (and lived with) to practically living with Guy in a span of 24 or so hours.

Now to take a bit of a step back – every single time Jimmy has talked to Guy in the bar, the bartender has worn a name tag with a different name. So Jimmy, on his birthday, asks what his real name is. Later (after they have sex… off-page), it becomes kind of a game with Jimmy guessing what it is. Hmm.. they are sleeping together, but Jimmy doesn’t know the guy’s name? Jimmy is promised something huge if he’s able to figure out what Guy’s real name is. He’s allowed seven guesses over a period of a week and if Jimmy can guess it? He’ll get a special gift from Guy when it’s over. I have to say I figured the name out almost immediately. I even told my blog partner before I finished the book what I thought his name was and who the bad guy was (see below). I got both correct. 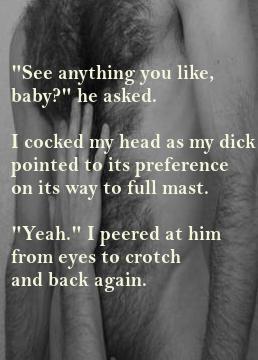 If you’re wondering where “Guy” came from? It was his own idea for Jimmy to call him Big Guy until he either figures out his real one or is told. Jimmy shortened it to Guy. In the beginning when Jimmy doesn’t know what to call him, he calls him (in his head) A2 – Alex2.

Jimmy and his business partner (and best friend) are doing so well with their coffee shop that they want to expand and open a second location downtown. The one they have in the mall is the ultimate place for mothers with kids and for teenagers to hang out at. The one downtown would be more of an all-adult type place. A bid on a new location is placed and accepted and all is good until the town bully, Tommy Thompson, decides to be a homophobic ass and cause trouble. Well, that’s kind of a problem considering that Guy is a big dude and has become extremely protective of his new “boyfriend” (<– that word or boyfriends is used in regards to these guys 23 times. A bit high school, in my opinion). Tommy apparently doesn’t like gay folks, so he (a business owner himself) has decided to be a bad-ass and try to welcome Jimmy to the (downtown) neighborhood his own way, if you get what I mean. Guy is having none of it and makes that known at about the same time the coffee shop that Jimmy owns is being trashed.

There’s a bit more drama, but the bad guy I mentioned figuring out early? The coffee shop trashing is what I was referring to. There were other characters introduced who added to the story. From Jimmy’s business partner to a chef at restaurant Guy and Jimmy go to, to a PTA mom who vows revenge on those who dared destroy the coffee shop she and her friends (and kids) spend a lot of time at. Oh, and we can’t forget Melissa, Tommy’s wife. Now she was the bad-ass. She didn’t exactly agree with her husband in regards to certain things.

The story is cute, but quite predictable. I knew who the bad guy was almost immediately. I knew Guy’s real name almost immediately (it wasn’t hard, the clues are all over the place). This has just about every stereotype one could imagine. There is the homophobic bully who didn’t want “that kind” moving into the downtown business district (though Guy’s bar has been there for generations). There is the designer who takes flamboyant to a new level. Jimmy is described as a twink who needs a big, bad alpha (like Guy) to protect him. There are punk young men with baseball bats (who, as we say in the South, didn’t have a lick of sense). But the one thing that really bugged me for some reason was one quote early in the book –

Penny’s Too on Main street will be the gay guys go-to place after Stonewall closed and the safe place for weekend breakfast and all-day coffee in a town with a lot of know-nothing rednecks.

This takes place in California, so I’m not sure where the know-nothing redneck thing would come in. I’m guessing they (know-nothing rednecks) are everywhere. But then again, I live in the deep South, so what do I know? Sarcasm, obviously. That really bugged me, like I said. That was totally unnecessary.

The story needed to have been fleshed out a bit and unnecessary drama and secondary characters should’ve been removed. I wanted more of Alex and why he was the way he was. I had a difficult time reconciling everything happening so quickly with Jimmy and Guy so soon after Alex supposedly hurt him so bad. I felt that all the stereotypes were unnecessary. It was so full of clichés that I found myself chuckling a few times when I knew I wasn’t supposed to. I’m not saying I didn’t enjoy the story. I did. I just feel that what I read was a bit too similar to dozens of other books I read when I first started reading gay romance. I also feel that leaving the sex off-page didn’t help with the story. Don’t get me wrong, I am not one of those who has to have graphic sex in the books I read. My favorite book in the genre has zero on-page sex. However, in What’s in a Name? it was needed because it was being built up to and then… nothing. It went from them getting a little hot and bothered to snuggling in bed or whatever after the fact. I think even with the short length of this book, it would’ve possibly been improved by at least throwing in a little bit of on-page intimacy.

While you can’t really call this insta-love because Jimmy and Guy had become friends over a period of months before they actually got together, I do think they – as a couple – happened entirely too quickly. They came together as a result of Jimmy’s boyfriend picking up a trick and were saying the “L” word only a few days later. I get that it’s a short story, but I feel that had all the unnecessary stuff (mentioned above) been removed and more time devoted to the main characters (and Alex), it would have been a much better story.

I’m also going to point out what other reviewers have in regards to the cover – the bald man would most definitely not be called a hairy bear, as Guy is described in the book. Guy is bald, but he had hair on his chest and was described as a “bear” more than once. I like the motorcycle and the bar, but the guys just don’t depict the characters in the book.

Hmm, there are a number of issues that would have made me an unhappy reader as well. I’m like you, I read my fair share of books in the genre with no on-page sex, but this needed some. Fade off page bothers me in books such as this. Don’t even get me started on the ‘redneck’ sentence.

If this is a first time author, then they can learn and you have given some wonderfully comprehensive feedback. Feedback that beta readers and a content editor should have given – or been listened to if they did.

I normally (as you know) am not a stickler for on-page sex, but I felt that this story really needed it. I believe the book just had so much going on that it didn’t focus enough on things that I personally felt were important.

You know how much I hate typing bad reviews and this one was no different.

And yes, the redneck thing bugged me big time.