Tour and Giveaway : Sons of Devils by Alex Beecroft

About Sons of Devils 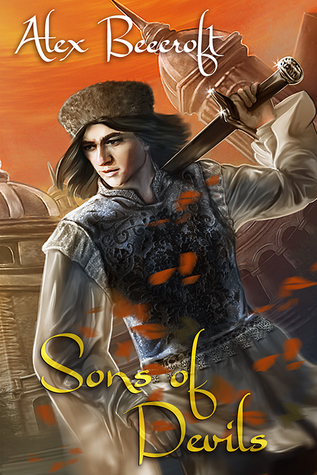 British scholar Frank Carew is in Wallachia to study the magic generator on nobleman Radu Vacarescu’s land. There, his party is attacked by bandits and his friends are killed. Pursued by a vampiric figure, he flees to Radu’s castle for help.

Unfortunately, this is precisely where the vampires came from. If allowed, they would feed unchecked and spread their undeath across the whole Earth, but Radu maintains a shaky control over them and keeps them penned in his tiny corner of the country.

As Frank recovers from his assault, Radu finds himself falling for the young man. But loving Frank and not wanting to lose him leaves Radu vulnerable to his demons’ demands. Can he bear to let them feed on the man he loves? Or must he give in to their blackmail and set them free to feast on his entire country?

To celebrate the release of Sons of Devils, one lucky winner will receive a $10 Riptide credit and one ebook from Alex Beecroft’s backlist! Leave a comment with your contact info to enter the contest. Entries close at midnight, Eastern time, on March 18, 2017. Contest is NOT restricted to U.S. entries. Thanks for following the tour, and don’t forget to leave your contact info!

NB: We currently use captcha code on our blog for spam protection, if for some reason you have a problem just email us at ontopdownunderbookreviews@gmail.com

I picked up this one on preorder because I love a new Alex Beecroft story in the world.

Oh you hero! Thank you 🙂

Thank YOU for all the words your wonderful brain has given us!

Not sure that I am missing any of her backlist, but I’m sure I’ll think of something to buy with the Riptide voucher, like her latest

Good thinking! And by the sound of it I need to buckle down to writing more. Thank you!

This sounds wonderful. I am adding to my list.

Oh thank you! I hope you enjoy it.

Congrats and thanks for the post. The book and cover look great. I love your stories, especially ones like this with historical aspects, like False Colors and Capt’s Surrender. – Purple Reader,
TheWrote [at] aol [dot] com

Congrats and thanks for the post. The book and cover look great. I love your stories, especially ones like this with historical aspects, like False Colors and Capt’s Surrender. –
TheWrote [at] aol [dot] com