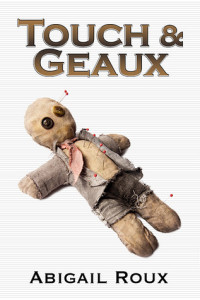 ** This review may be considered to some a little spoiler-ish.  While I tried to keep all spoilers out of the review something may be stated that readers may not wish to know until they have read the book themselves. **

Before I go into my opinion of Touch & Geaux, I need to make a comment and give any future readers some advice. Avoid updates on other sites and I highly suggest that you do not read any reviews until after you have read the book.  I tried to stay away from status updates on Goodreads but a few snuck in.  This forced me to go into a book that I have been anxiously waiting on with mixed feelings.  It was also pointed out to me (when I marked the book finished on Goodreads) that there is a review or update with a spoiler in regards to one of the characters that is about as far from accurate as you can get.  I have not read that particular review/status update and I have no intention of doing so. Everyone interprets things differently and I understand that but what was told to me would have prevented me from reading this had I heard that before I started.  Of course the person who pointed this out to me may have read it differently from how it was originally stated and my point may be moot.

In Stars & Stripes, Ty and Zane had finally gotten it together.  They had outed themselves to their families and they moved in together.  Their relationship was still a secret from their coworkers but that was okay.  That would happen later when one or both retired.  To do it earlier would have them separated and their work partnership would be over. Considering how well they work together, a separation on the job would not be an option.  I will state right here that Stars & Stripes was by far my favorite of the Cut & Run series.  I loved the five books before it but I loved Stars & Stripes.  I’ve read comments here and there from readers who thought Stars & Stripes had lost the edge of the previous books by being too sweet.  After the drama of the others I was eager to see sweet between Ty and Zane. I was not disappointed and I ended that book very pleased with where the series was going.

Touch & Geaux is not sweet.  It is a very intense book and Ty and Zane have problems that neither could have anticipated.  Don’t get me wrong, there are a few sweet, sappy moments but do not go into this book expecting it to be all happy and roses.  It’s not.  It’s emotional and at times very angry.

Ty and Zane are living their lives as a couple.  Everything is finally moving in the right direction and both men are happier than they have ever been in their lives.  Until Ty receives an urgent phone call from his old friend Nick begging Ty to come to New Orleans for reasons I will not go into here.  New Orleans is the last place that Ty needs to go (if you’ve read his history of New Orleans in the previous books you know why) but he and Zane jump on the first plane out to help Ty’s friend.  When they arrive everything goes to hell…. in Ty’s life, Zane’s,  his friend’s and most importantly Ty and Zane’s relationship.  Secrets come out that are capable of destroying everything the two men have built together over the past two years.  Secrets that are unforgivable.  Once the secrets are out, everything falls apart between Zane and Ty.  Throw in people from Ty’s past who are trying to kill him and all he holds dear (read:  Zane) and connected enemies of Zane’s and get ready for one hell of an emotional and angry ride.

“Zane,” Ty said, his voice hoarse. He cleared his throat. He seemed to be fighting to meet Zane’s eyes. “There’s something… something I’ve been keeping from you.”

“I guess we finally found the one thing more important to you than I am.”

“You think you did no wrong. And I can’t trust you.” He shrugged. “What else is there?

Ty and Zane are connected in ways that neither man had thought possible.  The secrets of New Orleans do not only belong to one man, they belong to both.  The way they are connected is strange to say the least but is written well.  There are a couple of coincidences that at first I thought “yeah right” but later they made complete sense… in more ways than one.

I will not go into the story with anymore details.  I refuse to spoil it for those who wish to read it.  Suffice it to say that this book is an emotional roller coaster.  There are times I wanted to bang Ty and Zane’s heads together and say “Fix it already!”  I got angry with both, one in particular. I found myself cussing the author a couple of times but boy did she redeem herself with these guys.  With all the intensity of this book, there are still classic Ty and Zane moments…. some funny (come on, it’s Ty), some so sweet that they will bring tears to your eyes, and some where (like in the other books) you will wonder how in the world the two men will finally have their happily-ever-after.

Nick (who I still cannot force myself to like) and the others who Ty served with are here in a big way.  There is a person from Ty’s past who may or may not be one of the good guys.  An old girlfriend and her family play a huge part of the story as a whole.  But in the end  it is all about Ty and Zane and their relationship.  We know they will someday get through all their issues and have their much-deserved happily-ever-after but they still have a lot to go through before they are able to get there.  This reader will eagerly be along for the ride every step of the way.

If you are interested in series that focus on one couple throughout I cannot recommend the Cut & Run series enough.  Personally, I run from these types of series (as most know).  However, I have fallen into the Ty and Zane world and I have every intention of staying there until Abigail Roux finally writes the final THE END at the end of the last book.

Overall, another outstanding continuation of Ty and Zane’s story.  I laughed a few times.  I got extremely angry.  I even shed a few tears.  But in the end I was pleased beyond my original expectations.  I will anxiously be waiting for number 8.

Some of my favorite quotes from the book:

“Zane.” Ty’s voice was harsh in his ear. “Don’t speak geek to me when you’re naked. It shatters the illusion.”

“Zane.” His voice was hushed and pensive. “Sometimes I’m not capable of expressing how grateful I am for you.”

“I’m an artist. I’m a geek.” He felt Ty smile. “I am one badass motherfucker on a motorcycle.”

Zane dipped his head until they were staring into each other’s eyes. “And I’m yours.”

A huge thanks to Riptide Publishing for releasing the book several days before the official release date.  You made this Ty and Zane fan a very happy girl. I can’t wait to see where these guys go next.