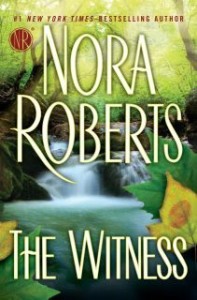 An excellent book reintroducing me to an old favorite.  Murder, romance, secrets, lies and an amazing cast of characters make for an outstanding story.

It has been awhile since I stepped inside the world of Nora Roberts. Up until a year or so ago, I devoured her books as quickly as they were released.  Had anyone asked me during that time who my favorite author was, my answer would have always been Nora Roberts. She is the queen of series and trilogies and is the only author whose series I jumped into without hesitation.  Times changed and I discovered new authors and new genres.  I walked away completely from all of my old favorites.  This book was recently chosen for me in a pick it for me challenge in a group that I co-moderate on Goodreads.  What a pleasure to be able to jump back into the world of Nora.  I have to say that a better book could not have been chosen.  This was an outstanding story in true Nora Roberts style.  There is romance, mystery, a strong female, a strong male and various other secondary characters that make the story complete.

Elizabeth is a sixteen-year-old genius.  She has to be.  Her mother is controlling and has laid out Elizabeth’s life for every second of every day. Elizabeth is the product of a well-selected sperm donor who had all the attributes that her mother required in order to have that genius child. At sixteen she has already completed pre-med at Harvard and is on the fast track to becoming the youngest surgeon in history at her mother’s hospital where she, the mother, is the Chief of Surgery.  Elizabeth has never rebelled or questioned.  She has simply done whatever her mother required her to do.  If that meant giving up her own hopes, dreams and any chance of having a normal teenage life, she still did what was required.

One day Elizabeth has had enough.  Her plans have been changed yet again by her mother and Elizabeth is tired of being her mother’s puppet so she rebels.  The one and only time in her short life that she does so, she witnesses a double murder.  She runs and contacts the authorities.  Her mother does not support her in her decision to do the right thing and eventually writes her off as if she never existed.  Abigail is immediately placed in protective custody only to have that protection taken away from her in a brutal fashion.  Not knowing who to trust, she runs.

Twelve years later, Elizabeth is now Abigail Lowery.  She lives in a small town, keeping to herself as much as possible.  Those she ran from are still out there and would not hesitate to see her dead.  She lives in a house that is well secured by devices she created and installed herself.  She has a job she does from her home involving high-tech security.  She has a large dog that will attack anyone if his master is threatened. There are loaded guns within reach at all times.  She avoids conversations with the locals.  She does not have friends nor does she want them. While leading a somewhat normal life considering her circumstances, she lives in a state of paranoia 24/7.

Brooks Gleason is the local police chief, having moved back to his hometown a few months earlier after a health scare by his father.  He is content.  Sex is available for him any time if he’s willing to deal with a crazy ex to get it. He has a wonderful family and a job he enjoys. Fascinated by the reclusive Abigail Lowery, he approaches her in a store and introduces himself.  Abigail makes it clear that she is not interested in idle conversation and makes a quick exit.  Later Brooks shows up at Abigail’s home unannounced and questions her in regards to a gun that she was obviously carrying in the store earlier.  Angry at what she considers an interrogation, she provides the proof that he requests in regards to the permit to carry the gun and then makes it clear that she has no desire to be questioned or bothered by the police chief.  That one unannounced visit becomes many as Brooks is convinced that Abigail is not only hiding something but living in fear.  He makes it his mission to uncover her secrets and to protect her if necessary.

Brooks, a seasoned police officer, can not simply walk away when he knows in his gut that there is something seriously wrong.  This protectiveness becomes more over time and a reluctant relationship is born between Abigail and Brooks.  Until she can fully trust Brooks, their relationship cannot move forward.  Gradually, Brooks breaks down those walls and is able to put steps in motion (along with Abigail and her computer skills) to finally bring those to justice who forced a teenage girl to run and hide.  The resolution was brilliant.

This is written in true Nora Roberts form.  Of all the books I’ve read by this author, I have to rank this as one of the top stand-alones.  The characters, both main and secondary, are written perfectly.  Abigail is a strong female who does not have to have a man in her life in order to survive.  She has managed on her own for years and is perfectly capable of taking care of herself.  Watching her allow Brooks inside was a true pleasure to watch.  The two of them together are perfect.

Overall, an excellent read.  This was the perfect book to reintroduce me to my old fave.  I look forward to more by this author and catching up with the ones I’ve missed in the time I’ve been away.