The Taming of the Hawk, Anne Brooke 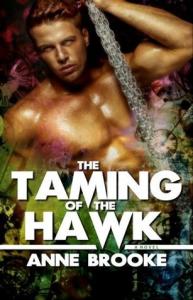 When escaped prisoner Redallek Castonar goes on the run in the war-torn city of Tetranal, he finds himself in the pleasure-house of Councillor Jarrod Tetran. Unaware that Redallek has made a blood-promise with the rebel factions to kill him, Jarrod is instantly attracted to the man. Although Redallek is determined to complete his mission as soon as possible in order to gain his freedom, he quickly finds his new master to be full of surprises and not the man he expected.

Meanwhile, Jarrod is secretly planning to take the ruling Council captive, and to begin a negotiated peace with the rebel army. Even though such an act goes against all his family stands for, he is willing to risk everything to save the country he loves from destruction.

Both Redallek and Jarrod are determined to fight for freedom and peace, but in two very different ways. Will their differences drive them apart, or can they find a way to work together for the good of all? And, even if they do, will the passion springing up between them lead to victory or defeat?

Redallek Castonar has been a prisoner for three years in a Tetranal jail. He’s just escaped and finds himself landing up in Councillor Jarrod Tetran’s pleasure house. Jarrod is a member of the Tetranal elite. He also likes hosting parties at his property. It’s at one of these parties that a good looking escapee comes through one of his windows with the orange-eyed night-police in hot pursuit. They want him back in jail but Redallek is attractive, in spite of his current state, and Councillor Tetran decides he’ll keep him at his house as part of his staff.

Red was beautiful. Even under the dirt and blood, and through the stench of flesh long unwashed, Jarrod had seen it clearly. A slight, auburn-haired man, a good twenty years younger than himself, with exhaustion on his skin, but fire in his eyes.
Then the bastard night-police had arrived. How Jarrod hated their brute-force tactics. The decision to keep the escaped prisoner, come what may, had been made at that moment.

Jarrod decides he’ll call Redallek Red and that once he is cleaned up, he’ll send him to the kitchen under the eye of his faithful servant, Bessani. Bessani takes an immediate shine to Redallek but there is more to it. He’s sworn a blood oath to assist in a plan necessary for the local rebel group. That’s how he managed to get to Jarrod Tetran’s house. Tetranal has been at war for some time over technology that can clean the polluted and poisoned atmosphere, the streets. There are rebel factions warring with the elites. 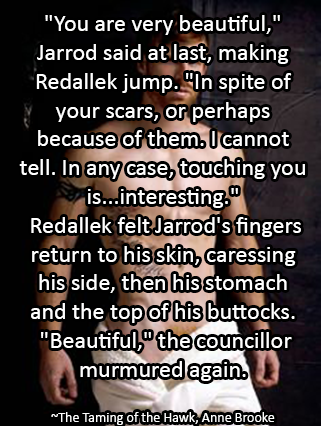 Bessani is more than the cook and keeper of Councillor Tetran’s house, she’s Redallek’s contact within the household for the rebel group. She supports them, but not if they are going to hurt Jarrod as she knows him to be a good man, unlike a lot of the ruling council. She helps Redallek with note passing and with diversions, but she isn’t privy to the full extent of plans that the rebels have hatched.

Meanwhile, Jarrod and Red get to know one another intimately and both like what they have – some rough play and sex. Jarrod misses his partner who died several years earlier from the poisoning of the city. While he has had other partners, he has never found what he had with Alban. The encounter he has with Jarrod Tetran confuses Redallek who has much more intensive orders from the rebels than Bessani knows about. He has to assassinate Jarrod. Thing is, Jarrod has been raising numbers amongst the guard and another ally on the council. He wants to peacefully negotiate with the rebels to help stop the war that has/is decimating his country and its people. Having someone trying to bump off the one person open to negotiations is not a great idea. Sometimes, though, the rebels trying to bring about change are no better than the people in power.

The Taming of the Hawk is a fantasy/Dystopian. It isn’t long at 42,000 words so while there is some 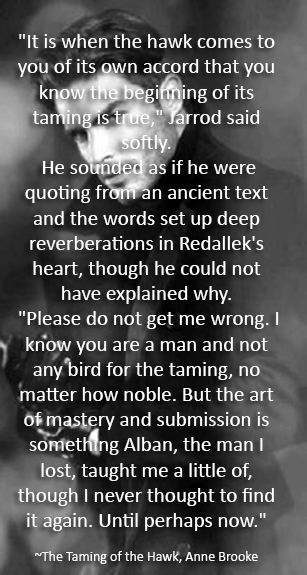 interesting world-building, and there certainly is, a longer novel would have delivered even more. Anne Brooke always has a lovely turn of phrase and it was used well here to give an old-world yet futuristic feel all at once to the setting. I must say there was action aplenty – it started with a bang and it ended with one or two. However, I wanted to know more about the machines that held hope for cleaning the streets, the pollution, and the poisoned land. That were at the centre of control and power between the elites and the rebels. The MCs, Redallek and Jarrod, are fleshed out well but I feel length would have added even more to their connection. I liked both of the protagonists – Jarrod, a decent man. Redallek, brave and loyal.  Both men are from different classes but both want to see change in their war-torn land. Both caught up in events and circumstances others have created. There is also a BDSM theme to the book, there is one sex scene between Jarrod and Redallek where Jarrod and Red’s… predilections meet up and it worked well, especially within the setting of the book. I would definitely like to revisit both characters to see where they are. How they are doing, as well as Tetranal. 4 Stars!

This looks like such an interesting read. I am all about books that start out with a bang and keep going. Great review. Love the pics and quotes.

It is an interesting book – I find myself being drawn more to the fantasy/dystopian world.

Yep, starting with a bang and ending with one is good. Thanks, Cindi 🙂

Thank you for the review – much appreciated! So glad you enjoyed the read. I’m hoping to do a follow-up next year at some point but haven’t quite worked out all the details yet – watch this space! :))

You’re welcome, Anne. and I have since edited it because I put the review up at ridiculous o’clock and it showed, it makes sense now *snort*

I will definitely “watch this space.”