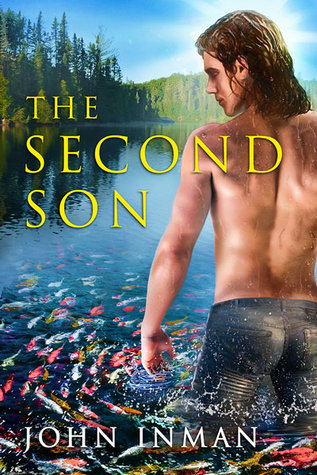 It’s an old, old story: a tale of the consequences of good and evil.  Plus the limitless power of faith and love, and how they can forever change an empty life.

When Charlie Strickland, a reclusive artist living in the backwoods of Indiana, opens his door to find a handsome young stranger standing naked on his front porch, an astounding odyssey begins.

It doesn’t take Charlie long to fall head over heels in love with his oddly innocent visitor. The young man calls himself Joe. Just Joe. But when amazing things begin to happen, Charlie soon comes to realize who Joe really is.

What follows will turn Charlie’s world, and everyone else’s, upside down.

The second son of whom is probably the most apt question to start this review with. John Inman’s latest novel is a fantastical and brilliant book that’s derived from a very old story, one we all know of. Whether or not you follow it in your everyday lives doesn’t matter, everybody has heard of it.

This novel is extremely hard to review without revealing spoilers, it’s also something that I do not want to do. I want everyone who reads it to go in as blind as I did to experience one beautiful, yet heartbreaking tale of love and hate, good and evil, those caught in the middle of it all and sadly those who are preordained pawns whose fate is to have their strings pulled like marionettes in an utterly heart shattering way.

The Second Son is a spiritual awakening on a global scale, focused more on what is morally right and wrong in my opinion. Compared to having to be a righteous, church going Christian. I’ll admit I’m not a fan of books based on religion or religious beliefs but the way this is written pretty much leaves religion out of it for the most part and focuses more on how individuals have conducted their lives.

This extraordinary tale is brilliantly written and although you begin to know where it’s heading, it still doesn’t stop you from reading on even though you know it’s going to implode and wrench your heart out in the process. As it gains momentum the events that begin to happen on earth shape its direction forever, harbouring a new era for its inhabitants but more so for one than anybody else. Everybody has their lives turned upside-down but one reclusive man has it harder than anybody else.

Relatively well known artist Charlie Strickland left California years ago to settle as a recluse in a very isolated property in the Mid West State of Indiana. Now living a life of solitude after a failed marriage, and then a nasty break up with the man who was the cause of his marriage to break up. Charlie is now quite content living peacefully and painting at his own leisure, giving up on his confusing sexuality and putting his true passion first, painting.

Early one night an eerie glow lights up the surrounding area, which is then rocked by a large earthquake. Scaring the bejesus out of him and his best friend Mac (Machismo), his dog, they’re then plunged into the pitch black as the power goes off. Charlie gets this feeling that there is something very strange about this earthquake as it felt different, and what was the deal with the creepy-ass glow that felt like something from a fifties horror movie?

He stumbles around to find candles to clean up the mess of glass that two paintings made as they were ripped from the wall. He gives up after fifteen minutes and heads directly to where he knows his other friend is. He has no trouble locating the scotch-whiskey though, and gulps down a huge swig. As soon as the lights come back on Mac is still acting crazy and then the house is shaken again as another quake hits and Mac lets out a wail that freaks Charlie out to the point where his skin crawls.

After a quick clean up, Charlie happily settles back down on the couch with Mac and another scotch after the excitement for the evening is over, and then comes a knock on his door. They both ignore it, it comes again and they both ignore it until Mac begin to make another noise as the door handle begins to jiggle. Charlie decides to see who this persistent caller is and is not prepared for what he finds as he opens the door.

Standing before him is one of the most beautiful young men Charlie has ever laid eyes on, he is greeted with a blinding smile from this stranger and then Charlie notices that this handsome young man is unabashedly stark naked. The stranger then bends down to pat one very excited Mac, who is not good with strangers and asks if he may come in. As Charlie ushers him in he can sense that this young man is more than he seems, as his eyes reflect an all too knowing innocence yet hold an ancient knowledge. He finds him a robe and invites him to sit down. He then proceeds to tell Charlie he does not have to fear him and asks Charlie to paint him. Charlie’s mind is in overdrive and as he sits next to the young man his eyes begin to droop and before he can even get another question out of his mouth they’re stretched out and snuggled together on the couch asleep.

The next morning Charlie awakes alone on the couch and as he remembers the previous nights events. His head goes into overdrive. He doesn’t even know the guys name. He has so many questions and when he finds him in his studio studying Charlie’s work he finally get’s to meet the very evasive Joe, or just Joe. The relentless questions Charlie keeps throwing at Joe are deflected as fast as they come, driving Charlie crazy. After a few days Joe begins to let his guard down and show Charlie who he really is, Charlie is in awe but deep down he already knew Joe was something very precious and has already fallen in love with him, a love that he also understands can never happen.

As events around the world begin to heat up, Joe falls violently ill for days, as he’s part of the reason that it’s happening. As he recovers he tells Charlie that he needs to paint him now. Time is running out and no matter how sick Joe still is, he never lets Charlie see it. As they almost finish, Charlie’s ex-wife shows up and cannot believe that Charlie has taken up with this young man, she calls him a con artist, and tries everything within her power to scare him off. Judith, now think of a male name that’s similar, is also a huge pawn in this cosmic tragedy, resorts to pulling a gun on Joe as a last resort to scare him off and ends up shooting Charlie instead, killing him instantly.

That is as much as I’m going to reveal, there is so much more that happens before and after that but I decided to focus on a small snippet of Charlie and Joe. The intricacies revolving around the main storyline before and after this event are both magical and dark. Either way it’s a beautiful yet very brutal story – that’s where you have to put some faith into hoping that everything really does happen for a reason.

I will say one last thing though, for anyone thinking is it the return of Christ? The answer is no. The answer is in the title and although Joe is one very special person, daddy is pissed and makes Joe just another pawn in his grand scheme.

I really have to read this book. The title already told me what I need to know and I love books with religious overtones or undertones.

Thanks for the review, Paul. Much appreciated. It sounds like such a hard book to review too.

Paul, I admit to mostly skimming over your review for the time-being, but only because I’m halfway through it and I don’t want to spoil it for myself.

Thanks for the review. I’ll pop back on and say more when I’m finished with the book. I’m a huge John Inman fan so I’m curious to see how everything plays out.

Thanks Paul for that great review. Thanks Cindi and Kazza for the kind words. Yay! 5 stars!

Me too Cindi, I hope you like it as much as I did. It was just one huge emotional roller coaster.

Thank you Kazza, I did let a few spoiler loose but it literally became impossible not too, otherwise it would have been nearly impossible to write. What I have let slip is a blip on the radar as to what the entire book is all about

No problem John, it was a fantastic read and thanks for the kind words

Thank you for this enlightening review of a book I’m now certain I’ll be reading quite soon. I can picture The Second Son following a contemporary fiction perspective of the second son of Yahweh. I must admit to being intrigued by the title and reviews.

I haven’t read it, John, but I think you may well be onto something with your train of thought… but I’m only guessing. No matter what, or how it goes, I love your thought processes on the book and I hope you enjoy it 🙂