The Cool Part of His Pillow, Rodney Ross 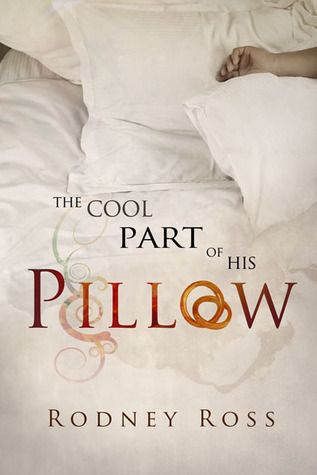 A realistic, poignant story about lost love, hope and family.

I went into Dreamspinner, saw the title, and the trailer (which I never usually look at), and I bought this book. I thought it sounded interesting, intense. I wasn’t wrong on both counts. I don’t know how to categorise it, it’s not my usual read. I also don’t quite know its demographic, other than people who love a good piece of writing, and, by the same token, aren’t afraid of (this is code for offended by) LGBT books. Yes, I suppose it does come under LGBT literature, but first and foremost, it’s a story about a person (like you, like me) dealing with life, particularly the aftermath of the death of a partner; it just happens to have a gay male at the centre of the storytelling. Don’t shy away from this book because of that, give it a go, as this book is written by a talented writer – it is clever, gut wrenchingly sad, laugh out loud funny, real and deserves as big a market as it can get.

How does one review this book?  Not very well I suspect, so I’ll just ramble.

Basically, this is Barry Grooms’ story. The POV is Barry’s. He is a businessman who owns and runs an upmarket, yet accessible marketplace style business called Great Rooms! He and his partner, Andy, a bank executive are 23 years happily in love. They’re faithful, successful, have good friends and family that either love them, Barry’s side, or tolerate them, Andy’s side. Barry has just turned 45, it is literally his birthday when disaster strikes – losing his partner, Andy, and their beloved dogs, Gertie and Noel, in one fell swoop. From here the book focuses on Barry’s journey through grief and the idea of beyond from this birthday to his next.

The Cool Part of His Pillow had me locked and loaded on two emotions sad/happy, seriously I had close to constant tears in my eyes, even when laughing. So, the book evoked two powerful emotions from me at the same time. Not easy to do, I’m not sappy, but I was this time. This book has a constant ‘blue’ undertone but it does not wallow in misery, because Barry does not wallow, he is definitely able to look ahead, after initial, understandable withdrawal. You can’t move ahead though without sometimes looking back, and he has his WWAD (what would Andy do) moments. It’s so hard at 45 to lose someone you’ve loved for a long time. Andy is actually very much a part of this book, particularly when Barry goes to Key West. Here he looks at how Andy embraced the local culture, wildlife, characters and it was nice to hear about him. Barry goes there to get a breather from all the questions that come someone’s way when a loved one dies and people either don’t know they’ve died or just want to see how you’re doing. Barry doesn’t want to get bogged down describing Andy’s death over and over and over, it’s like constantly re-opening a wound. At Key West Barry discovers that their friends also ask, they don’t know what has happened, and expect Barry and Andy to be together; as they usually are when there. So, Barry decides he needs a fresh start and it’s to be New York. There, he knows no-one.

This review could easily span 10 pages if I put everything down I felt was important, so I’ll skim. Barry is an interesting character, at times I see him as superficial and on other occasions he is just so caring –

“I would pile high every one of my material comforts for just one hour with Andy! I would surrender every cent I will ever have to bury my face into the neck of one of my dogs! I also know my wishes can’t come true.”

I fell in love with Andy at the caterpillar story (read the book). Their friends are quirky, funny, delightful, interesting and make this book so much better. The best parts are in the dialogue between Barry and his mother – “Your charm came from your mom, not your dad. Where your sister got her outlook, who knows? The collected works of Edgar Allan Poe, maybe”- his aunt, sister and (interestingly named) good friends – LezbyAnn, Potsy, Dee, Gregsquared (two Greg’s in a relationship). I want to give a shout out to au naturel, laid back, Captain Reg and his Wessie – think penis, named after the Loch Ness Monster/Key West combo.

This is not your standard M/M book. It is romantic in a wistful, and, at times, almost Shakesperean way. There are some short glimpses of Barry and Andy at the very beginning, then through the eyes of a lover dealing with grief looking back at lost love. There is no actual sex in this book, it is implied, that is it. There is a loose relationship during the 12 month period after Andy’s death. There is no HEA or HFN in the traditional sense. If you are primarily looking for those things be warned.

I would also like to note that this book is very American – geopolitically – ‘Rod Blagojevich had nothing on the literal skulduggery of Key West politics’- notoriety, celebrity and product wise.’ Obviously you don’t need to be an American to enjoy it, but if you live in America, particularly New York or Key West, it should resonate easier. It also helps if you have a love of books, theatre, movies, musicals and television, with an emphasis on retro.  And, of course, some pop-culture is universally understood – Youtube and other people’s tragedies, internet dating disasters.

There is no doubt this book is a labour of love, Rodney Ross infuses his characters with plenty of chutzpah, depth and emotions. Each chapter had headings and they always reflected the words held within, even the books’ title was addressed, nothing was ambiguous. I have very little to say that would be negative, probably the movie references and analogies could have been toned down and more dialogue with others could have ramped up, maybe it was too American, the lack of decent therapy, but, who cares, the writing was beautiful.

So, bottom line? I loved it and look forward to more of Rodney Ross’s writing and recommend it to people who want an intelligent, witty and real feel to a book.