The Beginning of Knowledge, Anne Brooke 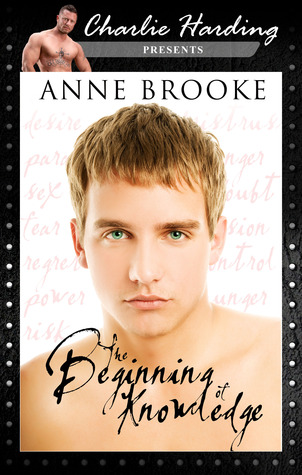 This is short, 12,000 words approximately. But Anne Brooke is the queen of these sorts of stories. She writes longer books brilliantly as well it’s just not many can say so much in so few words and make you go “wow” like Anne Brooke does. And I did so eloquently let out “shit” at one or two points in reading.

Alan Castleton is a university administrator. He is out for drinks at a local pub one night when co-worker Jo introduces the new, blonde man who appears at their table. Luke Milton is starting as a temp at the university during the busy period. He’s young, he’s attractive, although apparently not Alan’s type, and when they shake hands there may be no zing, but there is something –

…. in that moment I never wanted to let him go and I was also more afraid than I’d ever been. I dropped his hand at once.

Still, beneath the cover of the table, I closed my fingers across the hand he’d touched, making a fist as if to trap his essence inside.

Luke leaves Alan feeling off-kilter, so Alan decides to leave the pub and head home. But Luke follows him outside, grabs him by the elbow and almost gets socked in the jaw for his effort, then Luke kisses Alan –

I wiped my hand over my face. “What was that about?”

He shrugged and shook his head. “I thought you might kiss me.”

“And I did. I don’t want to kiss you anymore though.” That was a lie, even then, but I didn’t believe he knew me well enough to see it.

Silence. Then he swaggered up to me, bringing his mouth as close to mine as it was possible to get without touching. “Oh, but you do,” he whispered. “But you don’t want to admit it because we’ve only just met.”

It’s interesting. The younger Luke seems cocky, he tells Alan they are going to go on a date the Monday he starts temping at the uni. Alan thinks it’s preposterous…but –

“So where are you taking me tonight, Alan?” he said.

“Nowhere. Don’t be stupid. There is no date and there never has been.”

“Isn’t there?” Then why are you still here listening to me? I think what you what to do is lock that door behind you and come over here and feel the goods.”

This was too much….

The moment my fingers touched his shoulders, the warmth of his skin through the shirt switched on something inside me. Instead of a warning, I pushed him up against the photocopier and he gasped. I liked the sound of that. I gave him another little shove….

I didn’t want to kiss him again. Oh no. Nothing that simple. There and then, in the middle of the open-plan office, I wanted to rip his shirt, tear down his stupid trousers, bend him over the bloody photocopier, and fuck him so hard he wouldn’t sit down for a week.

So Alan is diving into an interesting kind of relationship –

A kiss outside work was one thing, but grabbing someone by the neck and shoving them quite another.

Alan looks out for students in his job. Empathises about them fitting in. He likes that his team have a caring attitude so you can imagine the conflict when he finds himself shoving someone into a photocopier, grabbing them around the neck. And as the book progresses Alan is obsessed with what he’s doing with Luke this…thing they have  – fucking him in hotel toilet cubicles,  uni restrooms, on the ground with no condom. Forcing rough blow jobs on Luke who takes it all and wants more. The consuming need to hurt Luke – sexually, physically, hitting, biting, humiliating him – is confusing yet powerful, exhilarating, liberating, out of control. 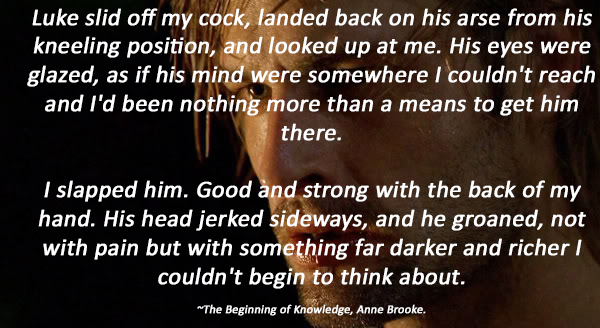 Probably best to avoid The Beginning of Knowledge if –

– you are looking for ‘sweet’, a romance, a HFN, a HEA, or some kind of round-peg-in-round-hole ending, because you will get none of these. Instead you will be made to think, you will get perverse, you will find an ending that fits with the entire theme. To be blunt, if it had ended differently I would have felt pissed off.

This is one of my favourite Anne Brooke reads. I loved the dark eroticism and the excellent development of the characters. In such a short word count I felt like I knew both men well, even though it’s Alan’s thoughts we are privy too. From Luke, the reader sees the reasons for the cockiness – the goading of someone he feels is a kindred spirit, the utter kink-need that rolls off him. You also see the obsession that has taken over Alan as the book progresses and why it would happen so easily for him. From initial feelings of ‘Luke is too cocky, he is not my type’, to the addictive all-consuming need to have this man anywhere, anytime, anyhow in the most base manner frightens the hell out of him. It’s so wrong it’s right. I highly recommend this book to those who like the sound of the review.