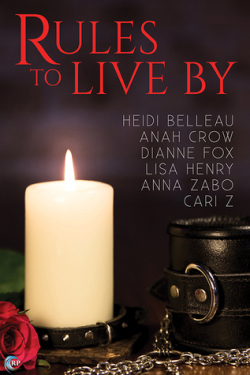 In Cari Z’s House Rules, jealousy leads Jonathan to break the rules his lover has established. He can’t decide which he enjoys more: his punishment, or the reward afterward. Good thing he gets both.

A lesson in humility.

In The Harder They Fall by Heidi Belleau and Lisa Henry, spoiled college boy Tad hires a prostitute, but “Daddy” couldn’t care less about what Tad wants. Instead, he’s going to give his spoiled little boy exactly what he deserves.

A cage that means freedom.

In Master Key by Anah Crow and Dianne Fox, Marquis offers Navin the key to the most intimate of locks, hoping it will help them to prioritize their relationship. And it does—until work and insecurities threaten to drive them apart again.

A spool of rope and a desire to be bound.

In CTRL Me by Anna Zabo, a night out between friends turns hot and tempting when Gabe deliberately pushes Tom’s submissive buttons. Then Tom discovers rope in Gabe’s glove box—and not the type for securing luggage.

Every comment on this blog tour enters you in a drawing for a $15 credit at Riptide Publishing. Entries close at midnight, Eastern time, on February 22. Contest is NOT restricted to U.S. entries.  (**If you get a spam message when leaving a comment, don’t worry. We’ll see it and make sure to add it.)

Thanks so much for the review!

I can tell I’d be all over this anthology based on your review. Great giveaway!

Awesome review! This really looks like a great book with so many of my favorite authors!