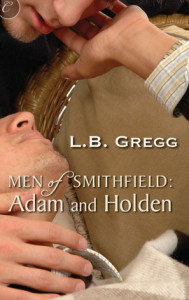 An interesting conclusion to the Men of Smithfield series.

Holden Worthington was once a globetrotting host of a popular adventure show.  After a former lover publicly exposed something that he would have preferred kept secret, he retreated from the public eye…… not only retreated but became agoraphobic as a result.  He has not left the inside of his home in over a year.  He is quite wealthy and is a successful writer.  The wealth insures that he is able to live comfortably with his condition and the writing can be done anywhere.  He does his writing from the inside of his huge home and watches life pass him by, unable to so much as take one step outside his door without having a panic attack.

Until he meets Adam Morgan, his new gardener.  His young new gardener.  Holden is 40 and Adam is 24.  Having never personally met Adam, Holden watches him go about his duties from the safety of his home, secretly lusting after the younger man.  While working on the long-neglected estate, Adam stumbles upon a dead body in the back of the property.  The story begins the moment he rushes to tell Holden what he found.

Holden’s family is dysfunctional with a capital D.  His brother, Porter, is a drunk who goes through wives faster than he can down his liquor. Porter’s friend, Kurt, is as bad as he is when it comes to the alcohol.  Holden and Porter lost one brother, Thayer, in an accident off the coast of Nantucket years earlier.  Their parents (who are only mentioned in passing) had been absent and snobby as a result of their wealth and were not overly affectionate to their sons.

Adam is the product of an even more dysfunctional family.  His father served time for a hit and run drunk driving accident that killed someone. Two of his brothers (who are in the book quite a bit) are selfish and all about themselves.  Adam’s family lives from paycheck to paycheck taking any job available to support the family.

Holden and Adam are complete opposites, not only in age but in status…. both of which mean nothing once the connection between the two men is made.

This is a pretty good book.  The murder mystery is there but the story does not get bogged down as a result of minute details.  The Adam and Holden thing had me shaking my head a few times but somehow the relationship worked.  The secondary characters are interesting, if not annoying at times. There’s Porter, Porter’s ex-wife, Kurt, Mrs. H (an overbearing and judgmental housekeeper), John, the ex who exposed Holden’s prior secret, and Tony, the police officer, as well as others .  Tony, from the first book in the series, is in this quite a bit as he is a police officer and a friend of Holden’s.  Normally I am all about revisiting with characters from previous books but I was not fond of Tony in his own book so I can’t say that I was overjoyed at seeing him so much in this one.  Thankfully, his presence was only scattered throughout and not a huge part of the book.

While I will not say it is my favorite of the four Men of Smithfield books, I will say that it is not my least favorite either.  I love books that have substantial age differences between the main characters so that was a big plus for me in this one.  I also devour opposites-attract stories and Adam and Holden are true opposites.  Holden is not the most likable character but Adam balances him well.  The murderer was relatively easy to figure out but that did not detract from the story in any way.  Everything comes together nicely in the end.

Overall, a good conclusion to the Men of Smithfield series