Recently I’ve read (most of) the Man Hunt Episodes by Luke Braun. A friend recommended them to me, knowing I read erotica as well as romance. I thank him a great deal because not only are these books hot, they are well written and well edited. If you are thinking about entering for this giveaway, do so knowing the Man Hunt series are gay erotica and you’re good with that.

Luke: Thanks, Kazza, and I’m so excited to be part of this happy occasion. I’ve been a lurking follower of On Top Down Under since I discovered you guys around this time last year. So you can imagine my pleasant surprise when I received your invitation to participate. I couldn’t say no.

Kazza: That’s good to hear. We have a lot of lurkers.

Kazza: Gees you’re a hard man to track down. There is very little to nothing about you, except a short bio somewhere. Tell us a little bit about Luke Braun. What got you started writing. Any interesting hobbies? Oh, and you mention you’re flexi sexual. Can you share what flexi sexual means?

Luke: Haha. Is that surprising? The Man Hunt stories are filthier than anything I’ve got up 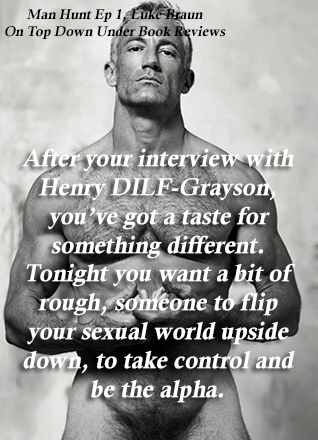 to in my own private life. I guess I’ve always been a closeted writer, and it wasn’t until earlier this year that I felt I had the courage to come out, and share my work with the reading public. It’s TERRIFYING putting your words out there, especially because I’ve tried to do something quite different than what is out there at the moment.

Flexisexual seems to be the new norm for anybody under the age of 25. It basically means I have a sexual preference, but I’m flexible, and every now and then I might fall for someone of the alternate sex. Maybe that makes me a fussy bisexual, I don’t know, semantics.

Kazza: Gay erotica is not the easiest of sells when it comes to books. Is it something you like to read as well as write? Tell us what it was about gay erotica that drew you into writing it?

Luke: This is something that I have discovered in my short career as a writer of gay erotica. When I first released Man Hunt, I couldn’t give the books away for free. No one was biting. It confused the hell out of me because gay erotica charts really well on Amazon (which as far as I can ascertain is the biggest marketplace). So my conclusion was that readers probably have their favourite authors, and that persistence was key.

I love reading erotica. I’ve been a fan since I was old enough to….um…read erotica. But it’s 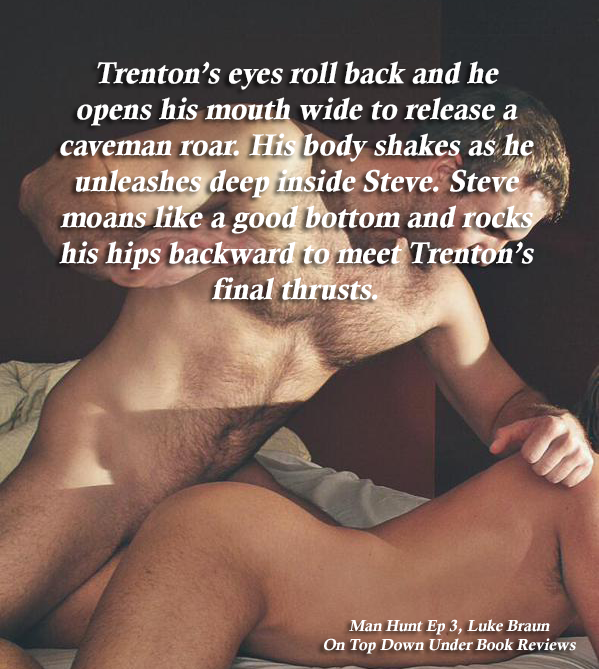 really hard to find anything with a decent storyline AND hot sex. Lately, most of my spare time is taken up with writing, and preparing for the paperback release of Man Hunt as a collection of short stories, and the reading I do is mainly Sci-Fi novels. I love Sci-Fi. Best Sci-Fi book I’ve read in the past few months was The Martian. If you haven’t read it…read it…and then go watch the movie. I’m a geek. Probably why I spent so much time dreaming about sex in high school, and not getting any.

What drew me to writing gay erotica was having a filthy mind and an overly cautious personality. I had to let the smut out somehow, and what better way than in literary form, so that readers everywhere can enjoy these fantasies, too. I have a folder with at least fifty completely outlined stories, growing by the day. The difficult part is choosing which one to work on next.

Kazza: Well, thank goodness for the people with “a filthy mind and an overly cautious personality.” They’re the ones writing our scorching erotica it seems 😀

Kazza: Apart from the Man Hunt episodes, is there anything else you have written that’s been published?

This was my first foray into publishing. I’m currently working with an editor to translate the Man Hunt stories into American English for an Audiobook and paperback re-release. My day job keeps me extremely busy, so it’s hard to be as prolific as most of the other writers in the genre.

Kazza: A friend drew my attention to Man Hunt in the first place because he told me they were well written erotica and a little different. I agree with his opinion. They are a little different in that it’s almost like you’re the person going through the experiences in each book. Was that your intention, to make a kind of interactive erotica series? You also roll a guy forward from one book to the next, and while the books are standalone, there’s a unity to them. Not too many erotica books do that, Where did that idea come from?

Luke: I was actually working on the first chapter of a novel (more about that later), and I’d 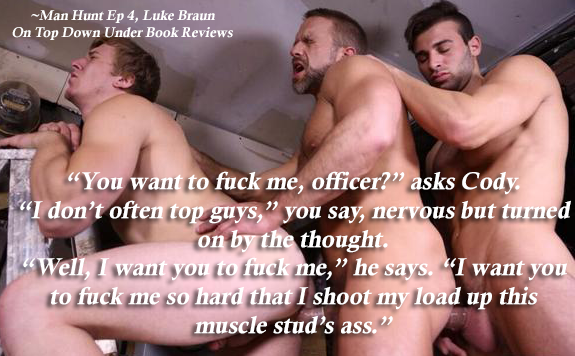 been having this internal debate for a few weeks about whether to write the story in first person present (i.e. I throw my underwear onto the floor, and step towards the strange man I just invited back to my bedroom) or third person past (i.e. He threw his underwear onto the floor, and stepped towards the strange man he’d invited back to his bedroom). Then the idea popped into my head that writing it in second person would make it even more engrossing. But it was a risk that I wasn’t willing to take (risk averse, remember) with a novel, and so I turned my attention to a collection of short gay erotic adventures. My intention was that if the story was read to somebody, they could close their eyes and imagine themselves in the shoes of the narrator. It’s why I think these stories will be a hit as audiobooks. I’m going to market them as hypnosis erotica because that’s exactly how they’ll sound.

Rolling one of the characters from each story forward seemed like a logical step. It felt too contrived to have the same lead character meet all these different kinds of men under different circumstances. I also worried that the sex might become too formulaic. So I thought it would be a cool concept to follow the “hunted” in the next episode as he goes on to become the “hunter”. I think it’s worked well. I mean, look at how we go from an underwear party at a nightclub in the first episode, to an all-male naked yoga class in the final episode. I think it also mirrors real life, how sex happens organically all the time between strangers.

Kazza: What else can readers expect from Luke Braun in the near future? Any new Man Hunt episodes? Any new books you have in the pipeline you’d like to share with us at On Top Down Under today?

As for further Man Hunt episodes, well, I’ve got a great idea for a second series. It will be even hotter than the first.

Kazza: Thank you to Luke Braun for joining us today. It’s been a pleasure having him here.

Luke: It’s my pleasure, too. Thank you for having me. Best of luck for the big 3 year celebration. I hope it’s your biggest yet. And thank you for all the support you’ve given the Man Hunt series. It is much appreciated.

Man Hunt: Episode 1 is only 0.99c from Amazon and available for free on Kindle Unlimited. http://www.amazon.com/gp/product/B00Z8OOG4E

**THIS GIVEAWAY IS NOW OVER. CONGRATULATIONS TO CK AND LS**

To help celebrate On Top Down Under’s 3 year blog anniversary,  Luke Braun is giving away 2 e-book copies of the complete Man Hunt collection. Kindle or epub formats are available. Simply leave a comment below for a chance to win. The giveaway runs until midnight October 12th USA EST  (If you comment and receive a spam message, don’t worry, we will see it and add it.)

Fantastic interview. I have the Man Hunt series on my TBR. I can’t wait to jump into them. Sometimes I need good erotica.

Thank you to Luke Braun for helping us celebrate our 3rd year! And thanks for the great giveaway.

The visuals were all my pleasure *grins back*

He is a charming, unassuming and funny guy who happens to write fantastic erotica. I have to do a decent review on the episodes, but I think Jay has got me beaten, hands down.

I agree, cheers to Luke Braun – with an awesome twitter name – for taking part in our 3 year blog anniversary 😀

Wow, great post 🙂 This looks like a great “bedtime” book /serie and i’m definitely intrigued. I enjoyed reading this post and i too love the Visuals you added LOL Thanks for the giveaway.

If you liked the visuals you’ll probably be into the series. It’s definitely good bedtime reading, Angela 😀

I’m lovin’ the eye candy and the interview. I really want to read the Man Hunt books. Thanks for the cool giveaway!!

Haha, thanks Alexi. I’m glad people are liking the ‘eye candy’. Me too 🙂

I’ve wanted to read these books since I saw a naughty review a few weeks ago.

The visuals and quotes would have me reading it based on those alone. 😉

Hi, CK. I bet I know which review it was, lol. Glad you liked the interview and giveaway.

Hey, when are you writing us some more smutty goodness?

I’ll say this… that was one hell of a naughty review. 😉

Late November and (possibly) mid-December should be kind of busy as far as new stuff from me. That’s the plan anyway. Thanks for asking!

Yaass honey. Puttin my hands up for this giveaway and those 3 guys :O

LS, I’m so glad you like the, uh, visuals. They’re episode inspired! lol

Ring that bell, Judes! It’s all good reading and another Aussie as well. 🙂

I love gay erotica. Thanks for the giveaway.

Me too, Lauren. Thanks for commenting 🙂

Another great giveaway. I’m with everyone else.. hello! on the visuals. I can’t wait to read these books.

Congrats to you guys on your anniversary and thanks for all the posts this month. I’ve discovered so many new books and authors. You guys rock.

I’m glad you’ve liked the posts, Bindi. It’s been a great month so far with more to come. This is a sexy series too 🙂

Thanks for the support and the anniversary best wishes.

Thanks for the interesting post and for the giveaway. Please include me in the draw. Thanks

Thanks, Dianna. It is an interesting post, lol You’re definitely in the draw as well 🙂

Hey ladies! Awesome interview with Luke Braun. I liked the answer about flexisexual. I like cock but if you can love the one you’re with that seems cool. 😎 The man Hunt eps are some of the best erotica reading I’ve put my mitts on and I’m like Luke, I’ve been into erotica since I could and I reckon I’m a connoisseur.

Thanks, Jay. I enjoyed the interview very much. The series has been sexy reading; I never doubt your erotica wisdom – I think you’ve been studiously researching for a while, lol

What a great interview! I thoroughly enjoyed it. Luke is a new author for me but I have put Man Hunt: Episode 1 as the next read on my list of Kindle Unlimited WANT TO READ. Thank you for the great introduction!

Cheers, Ree Dee! It was a good interview to get involved in and I’m glad someone pointed me in Luke Braun’s direction. If you like them gay, raunchy and sexy, then Man Hunt is a good series to read 🙂

Thank you to Luke Braun for the Man Hunt e-book giveaway and congratulations to the winners, CK and LS.