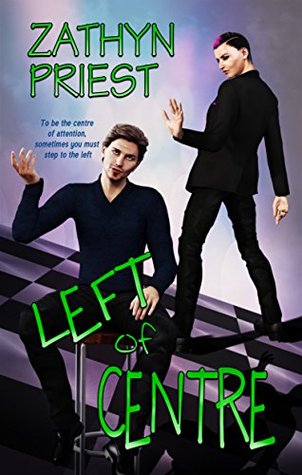 When self-confessed player, Brandon Faulkner, arranges to meet three different Goth guys over the course of one weekend, he isn’t expecting to meet someone like ‘Enigma’. Enigma isn’t like anyone Brandon’s met before. He’s unpredictable, volatile and… well, downright weird! To make matters worse, the gorgeous Enigma isn’t at all impressed with Brandon, and is unafraid to crush the man’s ego at every opportunity. For the first time in his life, Brandon has to work hard to win the guy. Will Brandon agree to Enigma’s left of centre, bizarre requests? Or will the player get played?

I read the first version of this story in September of 2011. I was literally brand new to the genre and had discovered the author strictly by accident and decided to read his work because his name stood out. Zathyn Priest wrote my very first read in MM. Left of Centre was read shortly thereafter and I never looked back. When I found out a few months ago that Left of Centre was being re-released I was hesitant at the same time I was thrilled to have an excuse to read one of my favorites of his again. Hesitant because sometimes rewrites change what a reader loved about a story originally. Thrilled because I knew I’d be getting a newer, polished version of a fave. I have to say that I loved it every bit as much this time around as I when I read the 1st version almost 5 years ago.

You can see my original review here.

Brandon Faulkner is a slut. Really, he is. At twenty-eight he’s all about getting off and nothing more. He doesn’t care about the guys he sleeps with. All he cares about is finding his own satisfaction. He’s all about meeting his hookups online. Crystalline Court is his current hookup site of choice. It’s a Goth site but Brandon isn’t even close to being Goth. He doesn’t let that little detail stop him from laying it on thick when he’s talking to the guys on there. Over time he corresponds with several different men. Online you can be anybody you want to be, right? Those who dare send him actual photos are dumped and forgotten about if they don’t meet his shallow specifications. Brandon is very shallow and has an ego the size of Australia. He’s all about cyber sexing with these men but only with words. One of his current ‘buddies’ pushes him to go one step further by masturbating via webcam. He almost doesn’t do it but he eventually gives in without his face or identifying features being shown. It was sexy as hell but it was also funny. The guy he was doing it for, screen name Rapture, couldn’t spell. It was distracting as Brandon was trying to finish what he started as he read Rapture’s so-called sexy instructions. 😉 I started giggling and couldn’t stop. Well, you see what I mean.

Brandon sniggered. There was a first for everything he supposed, but the sight of his prick hadn’t ever before succeeded in turning him into a country.

Why had Tarin pointed out poor spelling? Brandon hadn’t noticed it any other time and now it became irritating.

After Rapture, we meet Enigma, also known as Lewis. I fell in love with Enigma as soon as he was introduced. He didn’t seem all that eager for sex with Brandon, but he was willing to meet him anyway. Always up for a challenge, Brandon sets up a meeting at Iniquity, a local Goth bar. For the first time probably ever, poor Brandon’s ego takes a big hit. Enigma isn’t exactly subtle. I couldn’t help but laugh.

“It’s okay.” Lewis petted Brandon’s arm. “I know how difficult it must be for people like you to get dates.” He took his hand away to pick up the mug, shrugging in sympathy. “I know you can’t help how you look, and I never judge people based on physical appearance. It must be tough on you, though.”

There’s also Chaos. Chaos has gotten Brandon all excited because he’s big on having sex outdoors. It doesn’t matter that it freaks Brandon out a little – he’s never quite ventured into the outdoor sex thing – he’s still eager to meet the guy. You know, because sex is supposed to be a sure thing.

There’s also a man named Indigo, but I can’t say much about Indigo without giving the story away. Suffice it to say that he’s a very important character in the story.

On top of all of Brandon’s online men, we also have the pleasure of meeting his roommate, Tarin. I loved Tarin. The complete opposite of Brandon, somehow they work as not only roommates, but as best friends as well. Tarin added a bit of comic relief because he didn’t hesitate to tell Brandon like it was. Tarin also has a secret that only Brandon knows. Brandon might not be the most trustworthy guy with others, but he’s damn good to Tarin. On top of being friends and roommates, the two also work together in a vet’s office.

“You jerk off at the computer?” Tarin’s complexion paled.

“How many freaks are you jerking off with?”

“Three.” Brandon screwed his nose up. “Two if you wanna get technical about it. Enigma isn’t into cybersex yet. I’ve got seven others waiting in the wings for emergency purposes.”

There’s also Fluffles, the upside down fish. And Bendy, the fish with scoliosis. You’re thinking… “Hmm.. what the hell is she talking about???” I couldn’t not mention Fluffles and Bendy because both fish had me giggling and I couldn’t stop, especially Fluffles.

When Brandon agrees to meet each of the men mentioned above he has no clue what he’s walking into. He’s thinking he’ll talk each one into sex and then he’ll move on to other, new guys. What he gets instead is anything but. Oh, he does get the sex a time or two, but all his well-laid plans for no strings sex and dumping the guys afterward are thrown out the window. Nothing is as it appeared to him before he made that first date (with Enigma).

Without going into to much detail, I will say that this is definitely a gay romance, but it’s not your typical gay romance. There’s so much going on with all the characters in this book. Not only does Brandon’s inflated ego take a huge hit – as it should – but there’s so much to the other characters, Enigma especially. Left of Centre touches on a disability. The author has written several books that touch on sensitive subjects and each one has been written with care and sensitivity. Left of Centre was hilarious, as I mention above, but in the background is something very serious. The story may be light in some places but the serious parts aren’t brushed over or treated indelicately. If you’ve read any of his books you know what I’m referring to. I’ve read them all – most more than once – and I’ve ended each one feeling like I’ve learned something. That was definitely the case with this story.

Overall, I loved this book as much as I did the first time I read it. Probably more. All of the characters are special and that’s another thing that has me rushing to read Zathyn’s books almost as soon as they’re released. The reader gets to know and love the secondary characters as well as the main ones. I adored Tarin and some of the others, on top of Brandon and Enigma. If you’re looking for a really good and quick story, Left of Centre is perfect. You’ll laugh a lot like I did. You’ll get teary a couple of times. You’ll find certain sections sexy as hell. You’ll love watching Brandon go from being the selfish jerk he is in the beginning to finally finding the one man he’s willing to change for. He went from being the player to the one being played. It was a pleasure to watch. If you can get through the first few pages without cracking up, I’ll be surprised. It starts with a hilarious morning after/walk of shame scene where Brandon doesn’t bother getting fully dressed before sneaking out of the other man’s apartment. Of course, he gets stopped by a police officer as he’s doing his almost-naked-drive-of-shame. 😉 I started giggling then and barely stopped until I got to the end.

As he drove home, Brandon’s smug attitude dissipated when he saw police officers flagging down drivers for random breath testing. His panic had nothing to do with being over the alcohol limit. It had to do with sitting behind the wheel of his car in white cotton boxer briefs and a jacket. He hadn’t even bothered to put shoes on.

Zathyn Priest was my first and will forever be a favorite. He never fails to entertain me. I can’t recommend Left of Centre – or any of his others, really – enough.

Thank you for the review, Cindi! x

You’re welcome, Zathyn. It was nice visiting with these guys again. 🙂

Excellent review, Cindi. I think I would like to pick this one up and have a read. It sounds pretty awesome.

And, ah, you always remember your first, lol

The print in front of both guys was totally done on purpose. You can slap me later. I’ve never done a NSFW review of one of Zathyn’s books so it was strange doing it this time. 😀

Thanks! I really loved this book each time I’ve read it. And yes, you always remember your first. lol

I need the originals and then I’ll add them to our Tumblr for the pervy at heart… like me, haha!!

I will send them your way, with nothing covering the view. 🙂

Oh my, I had to fan myself while skimming that Cindi because I really want to read it. Is there books that come before it? I haven’t read any of Zathyn’s work as of yet, which is really shitty on my behalf, by not supporting a fellow Aussie that you guys review.
I do have a couple of Zathyn’s books though, my friend upgraded their Kindle and gave me their old one but I actually don’t like them, and the text-to-speech on it is shocking, so I’ll have to buy some recommendations.

Oh I meant to say I don’t like Kindle’s, not Zathyn’s work