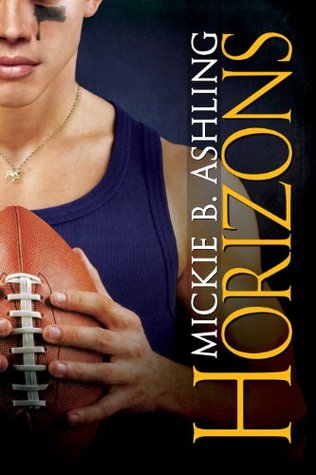 This review is slightly spoilerish. Keep that in mind before reading.

Twenty-three-year-old Clark Stevens, a popular wide receiver with a potential NFL contract, has a few problems. He’s got a jealous girlfriend, a narrow-minded and controlling father, an attention problem, and an unexpected and powerful attraction to the trauma doctor—the male trauma doctor—who treats him for a broken bone.

Dr. Jody Williams is getting some really mixed signals. He can’t ignore how much he wants Clark, because it’s obvious Clark feels the same way. For the out and proud doctor, the solution seems very simple. For Clark, it’s not! His world is not gay-friendly, and the obstacles he’s faced have led him to deny his sexuality for years.

It’s the Super Bowl of disasters, no matter how you look at it. In the end, Clark has to decide if he’s going to stick with the only life he’s ever known or take a chance on a new one with Jody.

I admit to reading this series out of order – something I never do. I read Chyna Doll (#4 in the series) first and now I’m going back to where it all began. 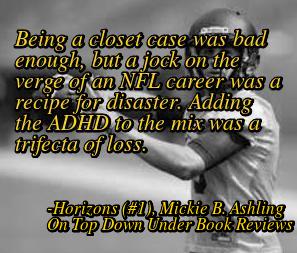 Horizons tells the story of Jody and Clark. Jody is a doctor. Clark is an up and coming college football star. Jody is the doctor on duty when Clark shows up in the emergency room with an injury. Sparks fly immediately between doctor and patient, but of course nothing becomes of it. Jody is Clark’s doctor, after all. Over a period of weeks Clark keeps finding excuses to go to the hospital in hopes of seeing the hot doctor. After one particular visit, Clark confides in Jody that he’s having problems in one of his classes. Jody, against his better judgment, offers to tutor the other man so he won’t lose his scholarship. This is all well and good, but remember those sparks? Well, Jody is out and proud. Clark? Not even close. He’s so far in the closet and has no desire to step out of it. He feels like he can’t. His entire world is centered around football. He was the star in high school, is the star in college, and hopes to land a NFL contract the following year. While the world may have progressed, it’s fairly common knowledge that being gay in sports can make or break you as far as your prospects go. It’s a sad reality, but a reality just the same. On top of that, Clark is having a difficult time even admitting he’s gay, even sleeping with his #1  fan, Nikki. Nikki is another story all together and I’ll come back to her.

During a tutoring session Jody discovers that Clark has ADHD. Apparently Clark’s parents are aware of this but have chosen (for stupid reasons) to do nothing to help their son out. No meds. No anything. Clark’s parents are a piece of work – both of them. His mother bows to her husband’s every whim and doesn’t have the backbone to stand up for herself or any of her five sons. His dad? I have no words. I was a sports parent for more years than I’ll admit in this review. I have three sons and they all played every sport imaginable. I’ve seen dads like Clark’s and I wanted to shake them every single time they criticized their kid. He doesn’t just criticize. Oh no. He’s a hateful bully who treats Clark as if he’s nothing. He (the dad) takes full credit for every single good thing Clark has done in his life, but blames Clark for any failures. The only failures I saw were the parents. They were beyond horrible and controlled every single aspect of Clark’s life. Clark is almost twenty-three when the book starts. While I can understand wanting to be there for your kids at whatever age, what these two people did was disgraceful on so many levels. 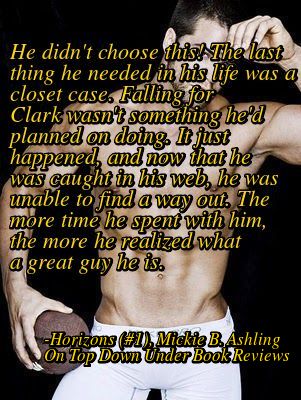 When Clark and Jody finally act on their sexual attraction is when the story really takes off. Suddenly Clark is admitting to himself that he’s a gay man and he’s enjoying discovering everything that entails. Everything, that is, except being open publicly about who he is. There’s a lot of back and forth between the two men before everything finally comes to a head. It was at this point that I got extremely confused. While it was somewhat explained later, I was very lost in regards to how specific things played out.

Then we get back to Nikki. Nikki is a beautiful girl who could probably have any man she wanted. She didn’t want the others. She only wanted Clark. Not only did she want Clark, but if he didn’t run to her when she wanted him to she went out of her way to hurt him by using Jody against him. There are a few things she did that were flat out inexcusable in my opinion. There was no coming back from that, even though the author tried to make Nikki out to be a decent person in the end. People tend to complain about the ‘token bitchy female’ in books and Nikki fit the bill completely.

I really enjoyed this book. I was able to see where Jody and Clark came from and how they got started. I was introduced to Lil, who I liked a lot in Chyna Doll. I like how Jody was willing to do whatever it took to be with Clark, even if it meant taking a bit of a step back on occasion. Once he fell in love, there was no turning back. The sex was good (though zero prep for anal sex – ever). Watching Jody and Clark finally get everything resolved where they could be a real couple was nice. A lot of things were nice, but I was bugged by things as well.

Nikki. Like I said above, she was this horrible person throughout the entire book, but the author made her okay later. I wasn’t good with that. She was the token bitch female, but she played the part well. I don’t like quick turnarounds with characters and that’s what we have with Nikki.

Clark. I liked Clark. I understood completely where he was coming from in regards to being afraid of losing everything he worked so hard for strictly because of who he loved. I got that. What I didn’t get (and I can’t lay it all out without typing a spoiler) was how he was so willing to walk away from the man he claimed to love. Granted, the reasons were legit, but I was furious over how that played out. I mentioned being confused? This is where the confusion came in. One day all was wonderful. The next? Not even close. Not just that, but Clark didn’t even have the guts to talk to Jody himself. That angered me. Had this occurred earlier than it did I likely would’ve stopped reading the book. Then we go back to Nikki because she falls into this little scenario. What Clark did was inexcusable, regardless of what his reasons were for doing it.

Jody. I liked Jody quite a bit. However, I felt that he was too willing to settle. He had this great career that he worked hard for. He’d found and lost love before and was devastated but able to overcome it. When it came to Clark? It’s like all that education and so-called common sense disappeared as if it had never been there.

Both Clark and Jody fell into the TSTL category more often than not.

Clark’s parents. Clark’s parents were your classic homophobic jerks we see in books every day. Between them and the sports thing, I felt as if I was reading the same book I’d read time and time again. It was too predictable. There was even homophobic violence against Jody for good measure. I’m not saying there aren’t people like Clark’s family in the real world. Hell, I see it on the news every day, unfortunately. But they were over the top in Horizons. 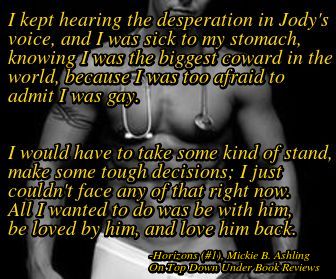 Overall, a good romance, if extremely predictable. If you follow me anywhere you know I’m a huge college football fan (Alabama Crimson Tide). While I’m a big fan of the sport, I tend to shy away from gay romance books that involve it. I shy away because they are usually about the guy who is playing football being in the closet for almost the entire book and it gets tiring. Sadly, that was the case with Clark in Horizons. I loved Chyna Doll – a new favorite for me – and I did enjoy seeing where Jody and Clark came from in Horizons. While the story wasn’t in the same category (in my opinion) as Chyna Doll, it was still a very entertaining read. As an adult with ADHD, I admit to relating to Clark in a lot of ways, and not so much in others. I understand that each case is different and the author wrote Clark’s well.

I admit to really liking how things came together at the end with these guys. Sure, it took a lot to get where they did, but in the end? Clark did the right thing and no longer cared who knew he was in love with a man. The way that came about made up for all the other issues I had with the book as a whole.

I’m off to read Taste (#2),  as I’m eager to see Lil and Grier find their way to each other. Lil was a trip in this book and I can’t wait to see him find his own man.

Hi Cindi! Thank you for this honest review of Horizons. This was my very first novel and looking at it six years later, I wish I had done some things differently. Still, firsts are memorable. and this one has a special place in my heart. I’m glad you enjoyed most of it.

You’re welcome, Mickie. I admit that this series has kind of turned into an addiction for me. After I read Chyna Doll I had to immediately jump into the others. I love seeing where these guys came from. I am really enjoying the series.

That’s music to my ears:) As I said in my other comment, these guys have been a part of my life for a long time. I’m always happy when new readers discover this universe.

Nice review, Cindi. I always love the way you cut to the honest chase about the plot and the characters. I’m like you, love my sports, not keen on reading about them in books.

It’s good to go back and see the roots of a story and also the progression of a writer along the way. I know you adored Chyna Doll and now you get to see the rest of the characters develop.

Thanks, Kazza. I’m really enjoying going back and ‘meeting’ the characters who were in Chyna Doll. Like I told Mickie, I’ve gotten addicted to this series now and can’t wait to finish the other books. Then, of course, I will eagerly await #5. 🙂

I’ve been on holiday & missed some reviews. This seems like a mix but the pix & the guys seem so hot. I know how you feel because i have to read in order. I like the way this series looks. Thanks cindi. 🙂